ERDINGER Athlete of the Month – July 2017

Somewhat later than initially scheduled, it’s time to get back on track with our 2017 ERDINGER Athlete of the Month awards. Meet Henry Irvine…

ERDINGER Athlete of the Month – July 2017. And the winner is…

July?! Yes, hands up, guilty as charged… we’ve been a little delayed on the Athlete of the Month front over the last couple of months! But, fear not, it wasn’t forgotten and we are now putting things back on track. Several updates are coming your way in quick succession over the next few days…

it is time for us to reveal who we have selected as our ERDINGER Alkoholfrei Athlete of the Month for July 2017. The June 2017 winner was Michelle Willcocks. Read on to see who is next!

For July 2017 we’ve selected an Age-Group athlete who produced a stunning performance at a debut race.

Finishing as the first Age-Grouper overall at IRONMAN 70.3 Edinburgh, Henry Irvine described his performance as his “best ever race!” – and on the bike and run legs at least, his performances were very competitive will all of the Pro’s, outside of the pace-setting legend and race winner, Andreas Raelert. Winning the M25-29 category, Henry finished four minutes clear of Chris Standidge, who has been one of the best and most consistent British Age-Group athletes over this distance for many years. In all regards, and very notable performance. 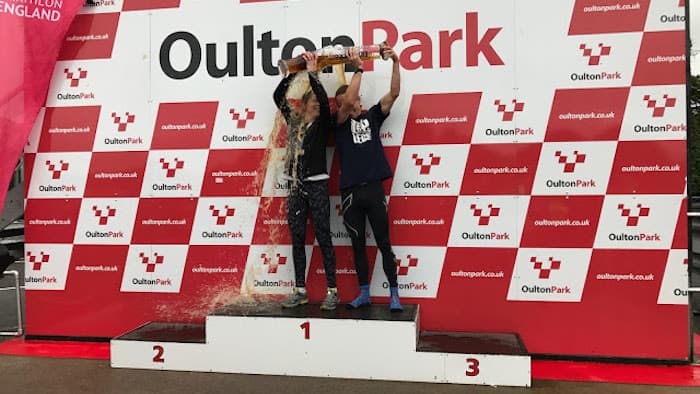 If there is one benefit of our somewhat late recognition of a ‘July’ award… it is that we also able to recognise that Henry ended his 2017 season with another excellent result – and an overall victory – at the Triathlon England National Duathlon Championships at Oulton Park in early October. 43 seconds down on the lead after the first run, Henry really hit the gas on the bike and cycled more than three minutes faster than anyone else. He half that gap on the second run and – in his first ever duathlon – became National Champion.