ERDINGER Athlete of the Month – October 2017

Our latest Athlete of the Month winner made the top step of the IRONMAN World Championship podium in October. Congratulations Linda Ashmore.

ERDINGER Athlete of the Month – October 2017. And the winner is…

It is time for us to reveal who we have selected as our ERDINGER Alkoholfrei Athlete of the Month for October 2017. The September 2017 winner was Simone Dailey. Read on to see who is next!

Triathlon in October. There is absolutely no doubt at all, that the IRONMAN World Championship in Kona, Hawaii, is easily the biggest race of the month – and for many in the sport, the most important race of the year.

Once again, the British Age-Group team produced some stunning results (summarised HERE), and it is Kona Age-Group winner, Linda Ashmore, who we have selected as the ERDINGER Athlete of the Month for October. Linda, along with Alison Rowatt (who we recently interviewed – and who won this award 12 months ago), was one of the two British Age-Group athletes who topped the podium this year. For Linda, it has been a rapid rise to the top.

Her second year in the 70-74 category, Linda has made stunning progress in her IRONMAN career in Hawaii. Her third trip to the Big Island, she has now collected thee Umeke bowls, having finished 3rd, 2nd and 1st over the past three years. Check this out for progression! 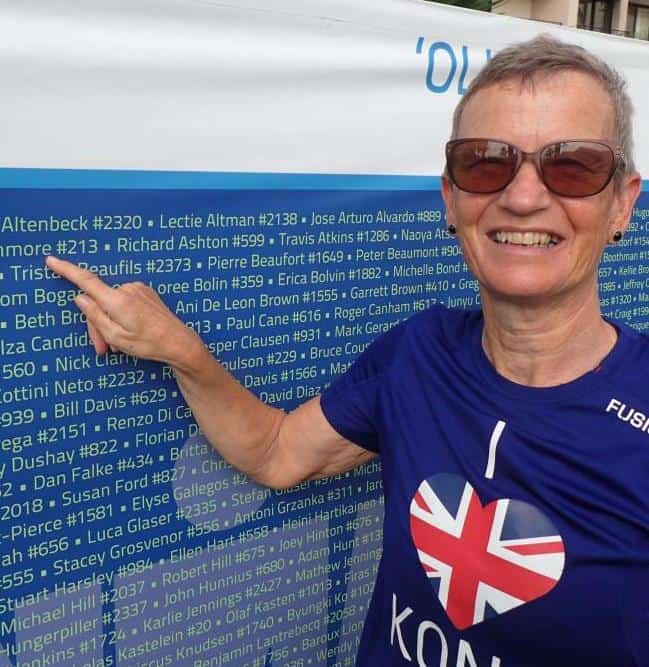 A late convert to triathlon, Linda only did her first IRONMAN – Bolton – in 2015, winning the 65-69 category in 15:19. A couple of months later she also raced (and won) at IRONMAN Wales (before heading off to Hawaii…), which secured her Kona place for 2016. She returned to Bolton earlier this year (improving again, and winning in 14:47. The interesting part of that race – she was also quicker than the men’s 70-74 winner!

Perhaps we shouldn’t be surprised by Linda’s abilities – in 2007 she swam the English Channel, aged 60, which at the time made her the oldest woman in the world to achieve that iconic crossing. Her next challenge? Well, she’s planning to swim the Channel again next year and take that record back!

An incredibly worthy winner of this award for October – congratulations Linda on your fantastic achievements. Long may they continue!

Help us find the Athlete of the Month for November 2017! – #AOTM