It’s pretty clear that indoor training has become the new normal for many of us in recent months, and that is likely to continue for some time yet thanks to COVID-19 and its impacts around the world.

With that indoor training has been increased adoption of the many online training tools and applications in the market, one of those being The Sufferfest (www.thesufferfest.com). Now owned by Wahoo fitness, who make the popular KICKR range of Smart Trainers, The Sufferfest have added a new fitness testing protocol called the ‘Half Monty‘.

Why might that be of particular interest, right now? Well, if you are a recent convert to indoor training then you will (or have), probably quickly learned that a baseline – typically an FTP (Functional Threshold Power) – test is one of the early starting points, to allow you to help tailor your own training. Such tests can often (always?!) be pretty painful and intense, in an environment when many coaches would recommend that you limit you exposure to high intensity training, balancing fitness gains/maintenance with health, and not putting potential additional stress on your immune system. If you follow that logic, this extract would be of particular interest:

Here are the details, along with a video to tell you more. You can currently claim a month-long free trial of The Sufferfest if you want to give it a try yourself.

The Sufferfest and Wahoo are pleased to unveil a revolutionary new ramp-style fitness test, dubbed Half Monty. Developed by The Sufferfest and Wahoo sports scientists, including world-renowned coach Neal Henderson, Half Monty has been developed and refined over the past year to give athletes a less-demanding testing protocol that provides unprecedented insight into their fitness, allowing more efficient training and the ability to more easily evaluate improvements during training blocks.

What distinguishes Half Monty from other ramp-style tests is its focus on the metrics that are most important to improving performance on the bike. This new test uses a 55-minute protocol (the exact time may vary, depending on an athlete’s fitness) to evaluate Functional Threshold Power (FTP), Maximal Aerobic Power (MAP), and Lactate Threshold Heart Rate (LTHR). These three metrics allow for more accurate goal-setting and personalisation within The Sufferfest’s workouts and training programs.

Half Monty also allows for more accurate performance measurements and more precise measurement during the testing protocol, even if athletes complete the test without a smart trainer or heart rate monitor. Finally, the new Half Monty test has adaptive features built in, gauging athletes’ progress during the test and providing personalised, real-time feedback to ensure that results are as accurate as possible. 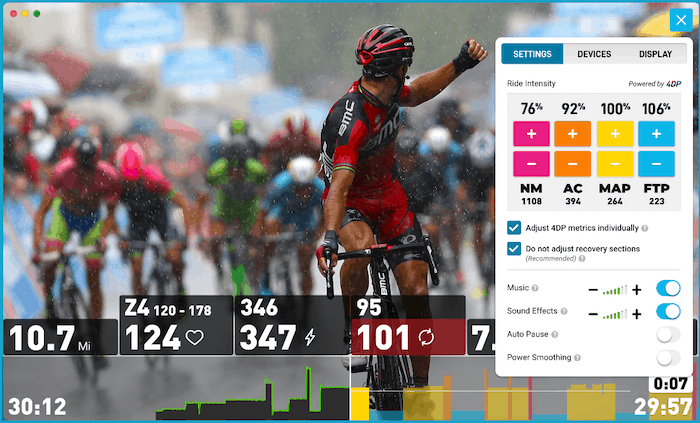 “Half Monty represents a leap forward in fitness testing,” said Henderson. “This new protocol is based on the same test I use for the elite athletes I personally coach, including World Record holders, world champions, and Olympians. We believe this new test represents several advantages over existing ramp tests, and we feel that it will soon become the industry standard — not just for Sufferlandrians, but for all athletes.”

The Half Monty is designed to complement The Sufferfest’s existing Full Frontal 4DP testing protocol, which measures Neuromuscular Power and Anaerobic Capacity in addition to FTP MAP, and LTHR. Compared to Full Frontal, Half Monty is less physically and psychologically demanding, and makes training with 4DP more accessible to athletes who are new to structured training. The less-intensive test also allows athletes to conduct mid-plan testing to ensure their training targets remain accurate.

Half Monty is available in The Sufferfest app now to all new and existing subscribers. The Sufferfest recently unveiled a suite of “All In” training plans designed to help athletes of all types confront the challenges of living in quarantine. These plans are designed to be completed entirely at home. The All In plans, as well as the Half Monty, are available as part of an extended, month-long free trial that The Sufferfest began offering in response to the current global health crisis.