James Teagle and Ruth Astle both notched convincing victories and course records at the PTO-supported Outlaw Half Holkham.

The return of the Outlaw Half Nottingham Triathlon welcomed 1400 athletes to a great day of racing, with Josh Lewis and Lydia Dant taking headline honours

The National 50-Mile Time Trial Championship saw another host of triathletes performing strongly, with Kimberley Morrison in the medals again

Pro triathlete Kimberley Morrison on the podium at the National 10-mile champs, where Dan Bigham adds another victory to his impressive C.V.

A good day for Team Bottrill athletes at IRONMAN 70.3 Staffordshire, with Victoria Kenny and her coach Ian Dempsey the fastest Age-Group athletes overall

Another busy weekend of included Alistair Brownlee topping of an ITU podium and plenty more British success. Check out the Weekend Roundup

Who are the British and Irish Age-Group women racing at the 2018 IRONMAN World Championship? Here are all of the female athletes who will be flying the #GBKona flag on Saturday

Who qualified for the IRONMAN World Championships from IRONMAN UK 2018 – and how fast did they have to go? Here are the 40 athletes who made it to Kona

As always, some impressive performances in amongst the Age-Group field at IRONMAN UK. A look here at the fastest amateur athletes and category champions from Bolton 2018

If you missed last night’s session, here is the Zwift custom workout file from the Bex Rimmington ‘Maximal Efforts’ session for you to try in your own time…

Earlier this year, Great Britain’s Bex Rimmington was announced as one of the four athletes selected for the first Specialized Zwift Academy Triathlon Team.

That was quite a feat for Bex in itself, given “The team will have an annual focus on competing at the Ironman World Championships at Kona, Hawaii.” Well, Bex will be doing her FIRST Ironman race in Bolton on 15th July. No pressure then!

That said, Bex as a distinguished sporting background (including a European Age-Group Triathlon Championship way back in 2005), and so while she is the ‘wildcard’ among the four athletes chosen, the selection team clearly has belief in her potential.

You can get an insight into what Bex has been up to in the video diary above – which includes her first half-iron distance race (which she won), a confidence booster after a recent injury.

Remember, Bex will be leading Wednesday nights TRI247 Workout Series session on Zwift – full details of which are HERE. Join us on the virtual roads of Watopia and support Bex in her attempt to qualify for Kona at the first attempt. 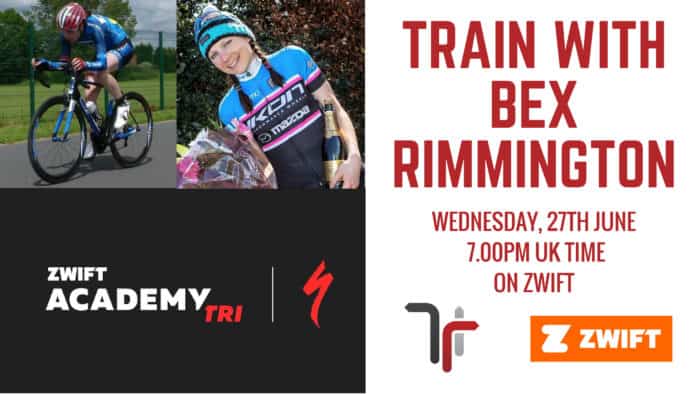 This weeks TRI247 Workout Series will be lead by Bex Rimmington, one of the four athletes selected for the inaugural Specialized Zwift Academy Triathlon Team. Details here of her ‘Maximal Efforts’ session.