As if completing Challenge Roth two weeks ago wasn’t enough, Ben Wickham signed up for the new Weekend Warrior at the AJ Bell London Triathlon too

Just two weeks after Challenge Roth (read all of his updates on that HERE), Ben Wickham is not relaxing and enjoying some well earned recovery… instead, signing up to take on the first edition of the AJ Bell London Triathlon Weekend Warrior challenge.

The ‘do as many triathlons as you can across the weekend’ challenge has been popular at the Blenheim Palace Triathlon for a few years now, so how did it work out in London?

This weekend saw the debut of the popular Weekend Warriors at the AJ Bell London Triathlon. So, fresh (!) from Challenge Roth, yours truly decided to capitalise on all those training miles, and give it a go.

This concept, that has been running a few years at the Blenheim Palace Triathlon, sees competitors completing multiple triathlons over the course of the weekend, attempting the maximum distance possible. The London Tri adds an increasing level of complexity to the idea, as it has multiple waves of different distances, and varied swim, bike and run courses over the two days, not to mention an Elite race in the middle of the day Sunday. So, tactically, running round as fast as you can might not get you the most distance, if you miss a wave with a longer course for example (the Weekend Warriors race the distance of the wave in front of them). Confused? You, me and most of the rest of us were too! 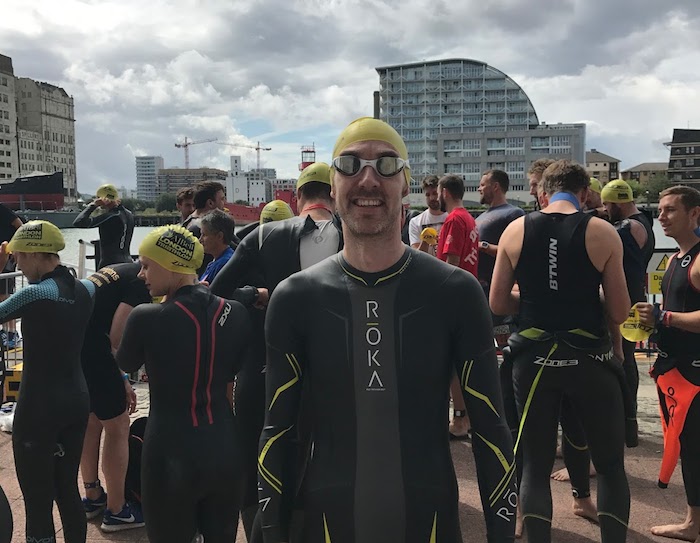 So after the Juniors raced on Saturday, the Weekend Warriors set off on an adventure into the unknown. The first (sprint) race was gloriously quiet as we’d set off first. Any issues regarding practicality were swiftly forgotten, and most issues were solved by showing our golden (well, blue) WW wristband and shouting, ‘Weekend Warrior!’ Which meant we could finish, duck out of the chute (no post race ERDINGER for us), put on the wetsuit, and jump back in.

Pro tip: If you fancy doing this, the more wetsuits you have, the better. Wetsuits don’t dry whilst you race, and putting a wet wetsuit on whilst in a rush and tired is very hard. The London Tri allow you a crew member to access transition and help out, and they are vital to set up and bring you your swim kit after the race, if you want to keep the pace up. My mate Damien did a sterling job resetting my transition, with increasingly foul kit!

My third race on Saturday was an Olympic wave. By now, the event was buzzing, so we were jumping in the docks with large waves in front and behind us. My race tactic of leading out the first two legs was looking increasing foolish as I bonked horribly on the swim, crawling around to a significant Personal Worst swim split. I crammed food and water into my face and got out onto the bike, only to be hit with 40km of rain, or freezing hail. The storm was so bad they delayed the whole event for a while, not that it helped those of us already out. Not only was I going very, very slowly (my bike is a pig in the wet), but my shiny new power meter was telling me that my legs had comprehensively given up too. I had 40mins to make the cut off for a fourth triathlon. I wasn’t going to make it. Although when I crawled over the line (almost literally), I was informed that due to the delay, I could still go out again. By this point I (actually literally) couldn’t get up, so another swim felt borderline dangerous, and my crew called it for the day. Hero of the weekend Chris Dunn, who I was racing all day, made that fourth one. 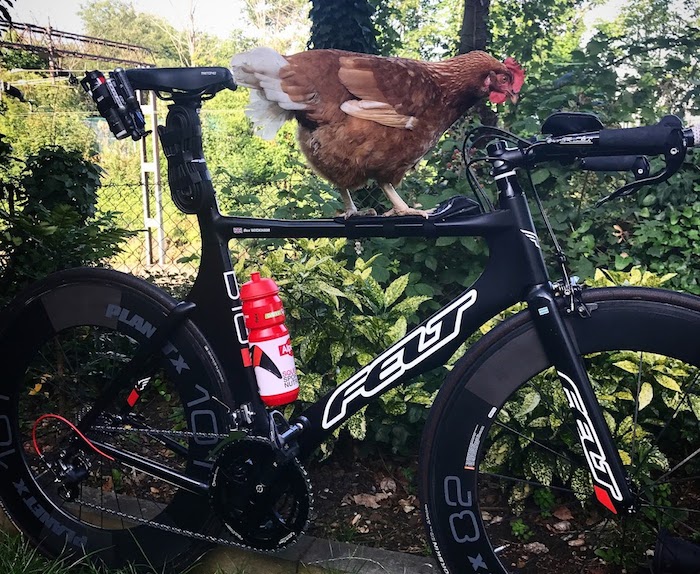 Saturday night saw me attempting to clean and dry my bike and minging kit; a massive pizza; and an early night. Sunday morning brought cool and dry weather, and a renewed vigour, if slightly aching limbs. Due to the timing, I was pretty much guaranteed two olympics, a break for the elites, and a sprint, as long as I didn’t bonk again. It all started with another lovely quiet leg, including the ride up to Westminster. This is a real highlight of the London Triathlon, and a nice break from endless laps of East London. Leg two put me between two huge swim waves so I managed to get caught by the front of one and catch the back of the other simultaneously, which made for a real smash-up of a swim. Again, back out to Westminster, riding the power numbers hard enough to make that cut-off but not blow my legs out, with a relaxed run ready for the lunch break. A cheeky ERDINGER, a bagel and salty crisps to refuel and I was ready to go again. Very nearly missed the sprint wave start, but luckily I was used to throwing the wetsuit on by now, so made it out. This wave was a highlight of the event, with the Weekend Warriors all back together to discuss who was leading, how bad our legs were. We were sent out on one final solo triathlon, ahead of the last waves of the day. 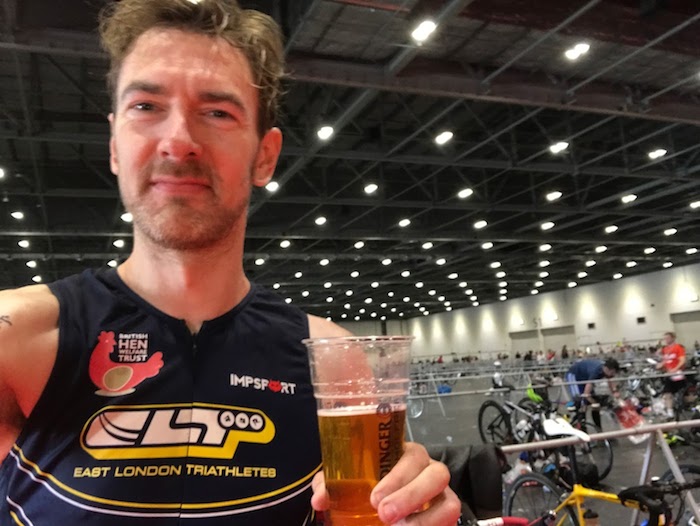 I crossed the line after six triathlons (three sprints and three olympics), exhausted, but having had a wonderful weekend. There was a fantastic camaraderie amongst the Warriors, and we were well looked after by the wonderful volunteers. I haven’t raced the London Triathlon for ages, and after a year of super serious long distance training, it was lovely to do something purely for fun, and race with all sorts of competitors, from the super fast, to those doing their first triathlon. I felt like I’d seen all the event had to offer, after doing all the loops and all the distances. 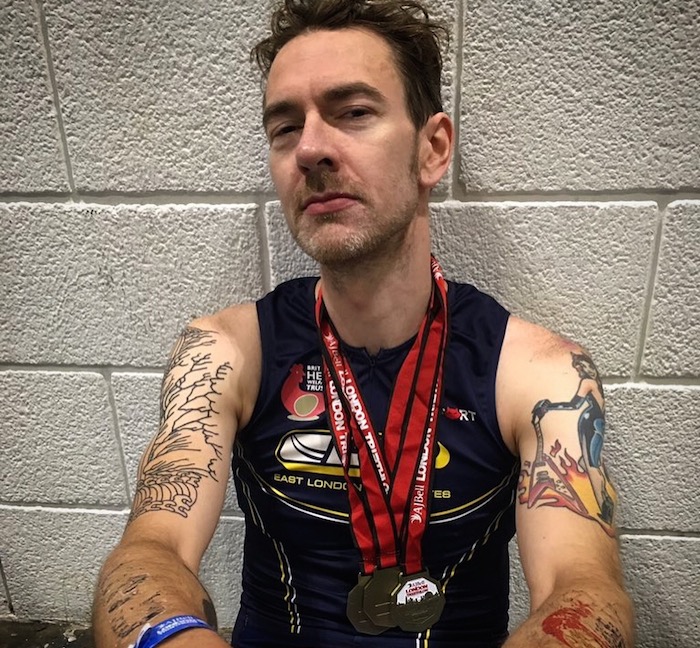 And it turns out, no-one managed a seventh. My fellow competitor Chris had a mechanical early Sunday and missed the first leg, but like a hero cycled the Olympic Plus route on one gear in an attempt to secure the win, which it looks like he did.  Respect to you Chris … I’ll be back next time to see if seven is even possible! 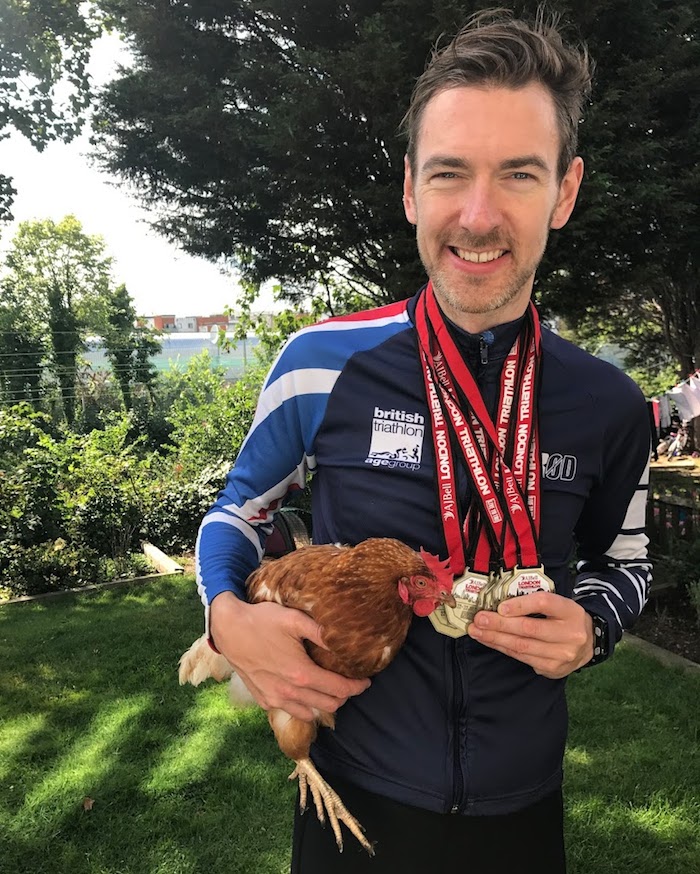