If you are one of the tens of thousand’s of people that work at Canary Wharf in London’s Docklands, look out for some triathlon action on your (work) doorstep tomorrow night, Wednesday. From 6:15pm in the evening – with a transition area right outside the Canary Wharf Jubilee line Underground station, the first Accenture Mixed Team Challenge will be taking place.

Here is the latest news, details and how and where to watch.

On Wednesday 5 September, the city heavyweights will leave their suits behind in favour of a tri-suit to compete in the Accenture Mixed Team Challenge Canary Wharf, a unique opportunity to race the elite mixed relay format ahead of its debut at the Tokyo 2020 Olympic Games.

The exclusive triathlon event which is completely free-to-view has attracted teams from many of Britain’s most well-known brands. Download our spectator guide at www.britishtriathlon.org/canarywharf

The racing is set to be a thrilling spectacle for participants and spectators alike with the action set amongst the skyscrapers of Canary Wharf as mixed teams of four, 2 men and 2 women will complete a 300m swim in Middle Dock, 5km static bike ride on Jubilee Plaza and 1.5km traffic-free run on Bank Street – nothing beats working together.

The heart of the triathlon is Jubilee Plaza ensuring work colleagues and sports fans will have a fantastic view of the racing which is guaranteed to provide an exciting post-office sporting event.

Competitors and fans will also be treated to a performance by live DJ Nadim Elsayed who will be swapping the shores of Ibiza for the Canary Wharf highlife providing an electric atmosphere as the city professionals battle it out to become the Accenture Mixed Team Challenge Canary Wharf champions.

Once finished, teams will meet some of British Triathlon’s top talent and celebrate their performance in a premium VIP hospitality experience at East Wintergarden, Canary Wharf.

Andy Salmon, British Triathlon Chief Executive added: “We have been planning the Accenture Mixed Team Challenge Canary Wharf for the past year and it’s so exciting that the event is now just a few days away. There are over 30 teams taking part in this exclusive event, which will provide a thrilling spectacle for competitors and fans in the heart of Canary Wharf.” 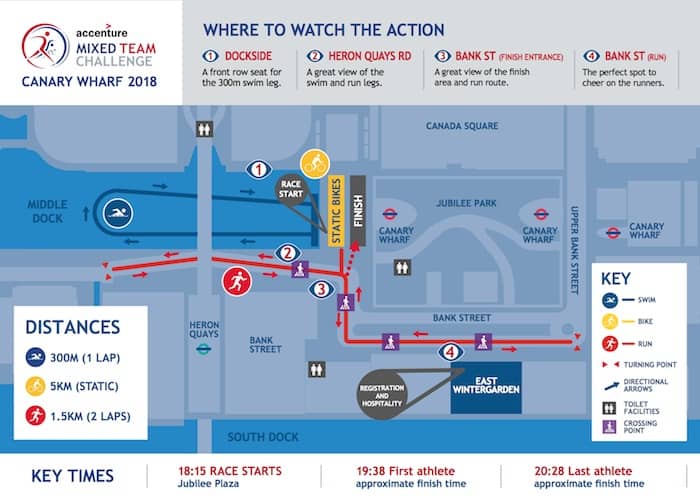