Holly Lawrence: I don’t think I’m anywhere near my limits yet…

In what is a very deep and successful pool of British female talent in middle and long distance racing right now, Holly Lawrence is right up with the best of the best.

Her performance in winning the IRONMAN 70.3 World Championship in Mooloolaba last year was highly impressive – and she started her season last weekend in fine style, winning IRONMAN 70.3 Oceanside by nine minutes.

At just 27, she is expecting to improve further and believes she will need to, despite her World Championship win, “I feel like I didn’t beat everyone on their best day, so that drives me going forward”.

I asked Holly about her race in Oceanside, transition from short course racing, whether going (even) longer is on her radar any time soon and much more.

Through 2015 and 2016 you’d had some great (and improving) results, but did it feel any different starting the season as the World Champion?

Thanks, 2015 actually wasn’t a great year for me, I’d just made the switch to purely racing 70.3 distance (from short-course), and I was constantly going into spells of fatigue, ending up getting injured before World Champs. I was barely running beforehand and I had the worst race of my life! 2016 was definitely my year, I had made a lot of changes to my coaching set-up and was able to just build throughout the year and have a consistent season, ending in winning the World 70.3 Championships.

I think the fact that Daniela Ryf didn’t have the dominant day we have all been used to seeing from her at the World Champs last year, I don’t feel any different going into this year. I feel like I didn’t beat everyone on their best day, so that drives me going forward, there’s no resting on my laurels!

You said before the race that you were feeling good, but didn’t know what to expect from the first race of the year. On paper it looks like a stunning result, how did you feel through the three disciplines?

I was actually pretty nervous before this race, just because it was the first race of the year and I was anxious to see where I was, it being the first real test. Although training has been going great, I just haven’t had the opportunity to go that hard for that long since last year. Was it still even there?!

I hadn’t run off the bike since last year, or even worn a wetsuit! I had an average swim, but it landed me in a perfect position to head out of T1 on my own so I could open up and just ride my race. I was really pleased how the bike went, I was just looking at my numbers feeling great, they were coming to me so easily, and was well in control. Onto the run I had a five minute lead over the next person so the goal was just to run steady, not needing to do anything special. That gives me a lot of confidence I could have definitely pushed harder on the run.

You are known for having a very strong swim and then being incredibly strong on the bike. At Oceanside you also ran one of the fastest times too – has that been a key focus over the winter for you?

Yes, definitely the run has been a focus and my boyfriend and run coach Sean Jefferson (ex pro runner and sub 4 min/miler), has been a key part of that. Just the difference throughout last season (posting the fastest run splits at a couple of races), and off-season of actually knowing the paces I should be running in training and really having a sensible and thought out plan… and of course a great training partner! My favorite session is our tempo run, I just sit in just behind Sean who sets the perfect pace and I just relax behind him and try to make it as easy as possible, its funny how quick eight miles can go if you have a butt in front of you that you don’t mind staring at! 🙂

In world level terms, your ITU race career wasn’t wasn’t especially standout – did you always have the belief that the longer / non-drafting events were where you would excel, or did that just develop naturally?

No it wasn’t, that style of racing just didn’t suit my strengths and was so dependent on who was racing as to how the race panned out. I just wasn’t a fast enough runner to get off the bike with a whole pack of girls to know I could run faster than them! I also just found it super stressful, it was so much more tactical and I just started wanting to race for myself and race my own race, that’s why I started trying out non-drafting. 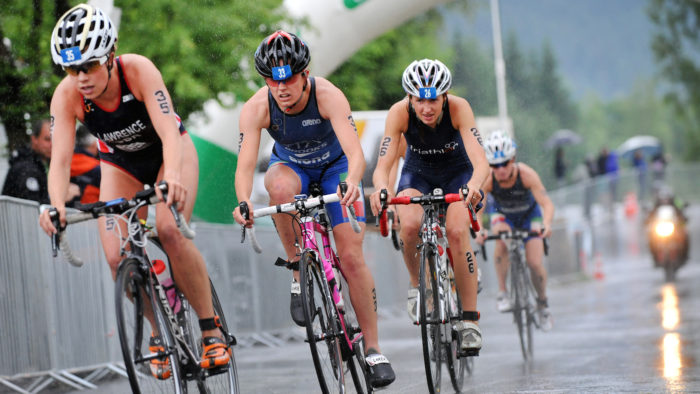 You’ve been based in the U.S. for a couple of years now. How did you make that decision to move, as I can imagine that it wasn’t an easy decision to make?

Two years! It was a pretty easy decision to move out at first as I had started working with a U.S. based triathlon coach and my boyfriend at the time from the UK had got a job in the same place, so it just made sense when I wanted to escape the cold wet winters of Swansea and have a consistent training base. But even when I left my coach and switched back to my UK based cycling coach (www.trainsharpcyclecoaching.co.uk) early last year, and split with my boyfriend (I know… a year of a lot of changes!), I just loved living out here.

I love the sun and it makes such a difference to train all year round without having to keep an eye on the weather forecast, and when the majority of your day is spent outside it mades a huge difference. Also, where I live in Santa Monica in LA, it’s easy to drive to a lot of the races on the circuit which minimises travel, which I love!

Once you’d made that move, was there a particular moment / race / result, where you thought “yes, I really can compete with the very best in the sport”.

I guess I never really felt like I had anything to lose or anything to prove, I have always just wanted to see where I could get. Being the best has never been my goal, I actually never thought I could be the best. I grew up in sport swimming, where I was the one that tried really hard but it never paid off, and I was ok with that. And I think in someway that has helped me today because my goals remain very much the same, I want to enjoy what I do, get the most out of myself and see where my limits are and I don’t think I’m anywhere near yet. 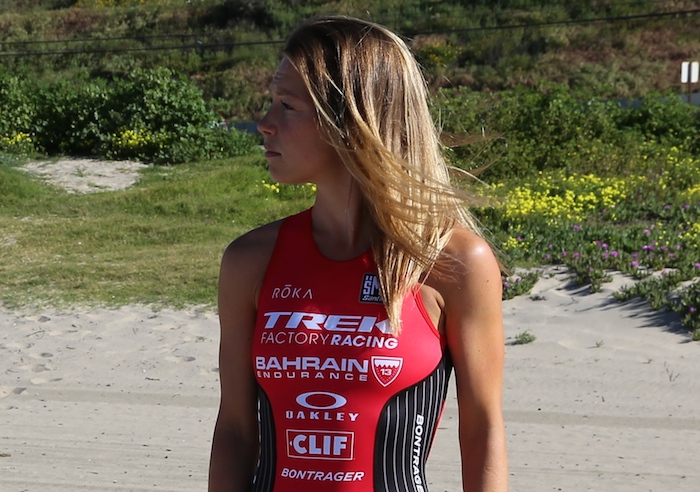 The huge growth of the IRONMAN 70.3 / Middle Distance format has meant that athletes don’t ‘need’ to race full iron-distance if they choose not too. What are your thoughts on that – is going long(er) on your radar?

It’s fantastic! I love this distance, I still think it’s a VERY long way, and right now I couldn’t imagine doing a full Ironman. I just want to get everything I can out of racing 70.3 first and see just how fast I can go, before trying out full distance. I’m 27, still young in terms of long distance triathletes and I want to have a long career. I also don’t think I could handle that much alone time, I think I would need to have some pretty deep personal issues that I needed to work through to race nearly 10 hours on my own!

What’s on the schedule for you this year, and is there any chance we might see you race in the UK at all?

I would love to race in the UK but unfortunately the races just aren’t big enough, the prize money, points and field are just a lot weaker. I’d love to race a European Championship soon, but it doesn’t really fit into my season this year so I’m hoping I can next year! I will definitely be back at some point to see my family. That is the biggest sacrifice, although I am doing something I love and actually now making a career for myself and loving where I live. It tugs on the heart strings having to be away from them!