Next month, Great Britain’s Maurice Young ill be racing the European Duathlon Championships – at the age of 83. Read how (and why) he does it!

Age is no barrier for Maurice Young

Age-Group Duathlete Maurice Young is proof that age is no barrier when it comes to competitive sport.

Set to compete once again for the GB Age Group team at the European Duathlon Championships next month in Soria, Spain – aged 83 – Maurice recently spoke to Claire Burling of Yellow Jersey (www.yellowjersey.co.uk) about how he went from “realising I was struggling to keep up while walking my dog”, to a multiple World and European Champion.

Tell us a bit about yourself

Before retiring, I had a satisfying career in the legal industry and have been happily married for over 50 years. I will be 83 next month in Soria, Spain preparing for the European Championships 2 days later and hoping for a double celebration afterwards.

Were you a keen athlete your whole life?

No! After realising I was struggling to keep up while walking my dog, I decided to do something about it and joined Halstead Road Runners. Over the next 25 years I raced over different distances until The London Marathon in 2008. I found myself in crippling pain after this and was unable to run. Confirmed as spinal stenosis, I was advised to not run further than 10k at a time but to cycle as much as possible.

And that was the natural progression to Duathlons?

Yes. My friend and international age grouper Jim McTaggart pointed out to me that this shift in disciplines would suit Duathlons – I entered my first one in 2010 and was instantly hooked. Soon after, to my amazement, I was invited to represent GB in the 75+ age group at the world Championships in Edinburgh. I went with one ambition – not to be last and was very relieved to overhaul a USA shirt before the finish! 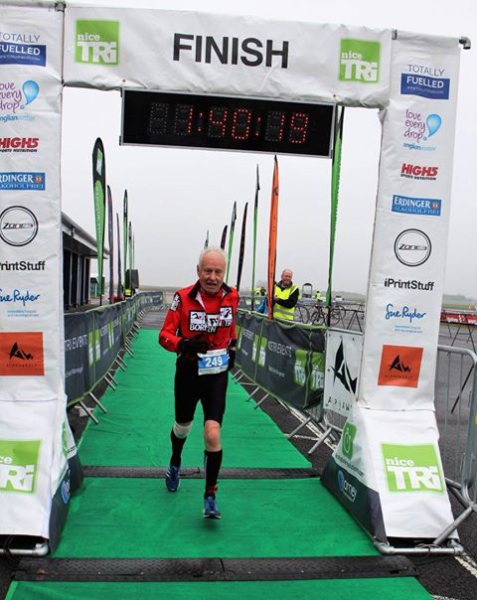 What is your proudest moment in your competitive career?

Being with the British Team in the Parade of Nations, then being welcomed by The Lord Provost by the Parliament. I have also now competed in 10 internationals all over the world.

Which of these was the most exciting?

Winning in Ottawa Canada in June 2013 by 40 seconds, claiming my first World Title. Many of the more senior age groupers tend to be athletes who have been competing at a high level for a long time and are now reducing their involvement, whereas I am trying to go the other way!

What is your weekly training schedule?

I run weekly with my Running Club and at Parkrun, and cycle with my Tri Club. The rest of my training includes long stamina building rides, more frequent runs all tailored towards my next race and any weaknesses in the last race.

I believe the ideal age to take up Sprint Duathlon is 65, as retirement changes your lifestyle and frees up your time. Regular training can do wonders for you in the older age groups, you just need the inclination and determination to get started! Your local parkrun is a great place to start running in a friendly, informal atmosphere. I would also recommend joining a club. As a novice you are given lots of friendly advice and I have found you are treated with particular respect as a veteran.

Why would you recommend duathlon as a retirement activity in particular?

There are two key reasons – social and physical. Physically, it keeps you fit and helps you lose weight without even trying. Socially, it is an excellent way to meet new groups of interesting people with a positive outlook on life. It gives you a new sense of purpose and an exciting new challenge.

For his travels, Maurice is insured with Yellow Jersey Cycle Travel Insurance.