“Any other challenge in the future, after this experience. will surely be easier…”

Triathlon X (www.wasdalex.co.uk) might well be the toughest iron-distance triathlon out there.

“It attracts a different kind of racer”, says Steve Clark. Read his (race winning…) report, here. 14 hours, 26 minutes and 23 seconds. And that is just for the winner.

“THE FULL X – VOTED THE WORLD’S TOUGHEST ‘IRON MAN’ BY 220 MAG 2016 – 140 MILES WITH ALMOST 17,000 FEET OF CLIMBING. FOLLOWING THE RENOWNED FRED WHITTON CYCLE SPORTIVE ROUTE AND FINISHING WITH A RETURN MOUNTAIN RUN TO SCAFELL PIKE SUMMIT, THE FULL X PUNISHES YOU LIKE NO OTHER TRIATHLON”

This is how the event is described on the website and from racing it on Saturday, I’d say they’re not wrong!

This event certainly has the extreme factor to it and attracts a certain type of racer. Whilst registering it was evident by the t-shirts this was a hardcore event; everyone displaying their proudest achievement whether it was Norseman, Swissman, Celtman, Marathon de Sables etc. Wow. I’m not sure, but I don’t think my Brigg Sprint Tee had them quaking in their boots. Like I say… it attracts a different kind of racer.

It’s a very early start as the swim in Windermere sets off at 04:30 so you feel like a Zombie when racking your bike at 3am. The swim is interesting, it’s an out-and-back two-lap with no sighting buoys… just two buoys 1km apart there-and-back. Twice. So, on the return section you have swimmers swimming both ways. I must have swum into about 10 swimmers coming the opposite way each time. They must be blind, I thought, or was it me? 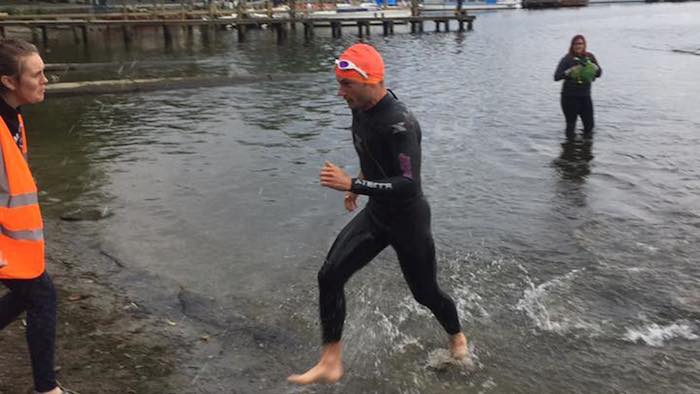 Luckily the water was calm and not too cold at 15.5 degrees!! I exited the water in seventh place, which I was happy with as I took the swim steady knowing this race was never going to be won or lost in the first 3.8km. It was the dreaded bike and run that followed that would decide who would win. Oh yes, I forgot to say, despite it’s fearsome reputation, I wasn’t here to make the numbers up.

Out of T1 and still in seventh place you’re pretty much immediately into the first climb, this is aptly known as the “The Struggle”. I didn’t go mad, just set a nice tempo on the Paragon Aero and slowly overtook a few. At the top, my trusty support team were waiting and shouted that I was in third and 10 minutes behind the leader. 10 minutes was a big gap, but with so many climbs to come I knew this could easily come down… or likewise go out further if the leader was a mountain goat. I hoped for the former! 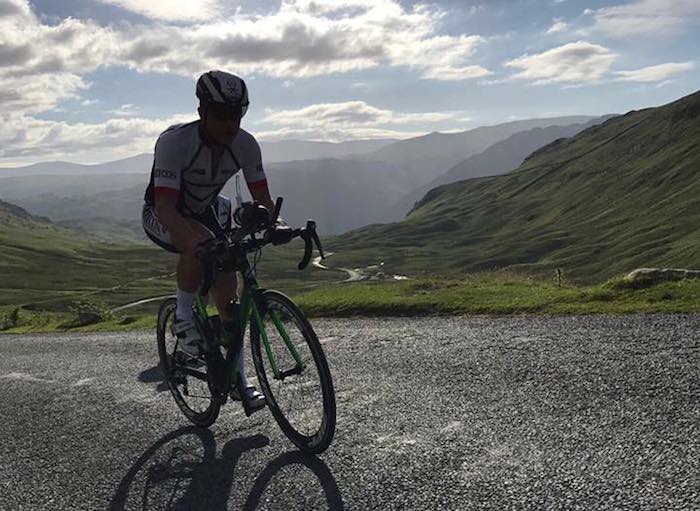 It was amazing on the bike having team Dobbers follow me, giving me encouragement and timing checks all the way round. I can’t thank them enough as driving that course is probably harder than riding it. 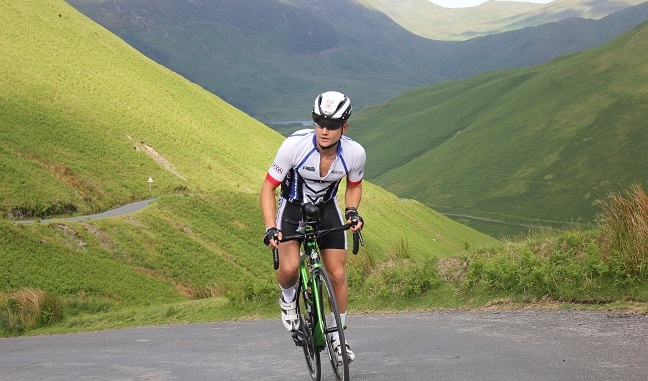 The Course wound its way through every type of terrain and roads. Flats, rollers, climbs, fast downhill’s. The roads would go from a main highway to one lane country roads that seemed more like back alley’s than roads. The country went from open grazing land to full on forests, to pine trees, to lakes and everything in between. At times, I felt like I was in the middle of nowhere. It was beautiful and fun riding.

At mile 90 the course transitioned from a fairly flat section into the base of Hardknott Pass. This is the hardest climb on the course and one of the top 10 hardest climbs in the world. It’s only a couple of miles, but grades hit 33% and require a hard effort just to get up without walking. As I started, for the first time in my life I was actually intimidated by an uphill gradient and had genuine concern about getting up it. Getting up took way more effort than I would normally put out in an Ironman, but I did it without unclipping. I was tired at the top and out of fluid and although I had 18 further miles of riding and a mountain marathon to do, I was happy that the worst of the bike course was over.

The bike ride wasn’t all plain sailing though and I did have some mishaps. Two punctures, one whilst descending Wrynose, a front wheel blow out which was pretty scary. A few near misses with sheep in the road and points where I was riding on roads with cars and tractors coming the opposite way. Here the roads were only wide enough for one vehicle so I was half up against a stone wall or in the bushes and half on the road. I suppose this all adds to the race and what makes it ‘extreme’, as just getting around safe is an achievement.

Into T2 still in second but only a minute or so behind as I saw the leader running out of transition as I was riding in. “The race is on”. Just 26 miles of up hill and down dale including England’s highest mountain, Scaffell Pike. 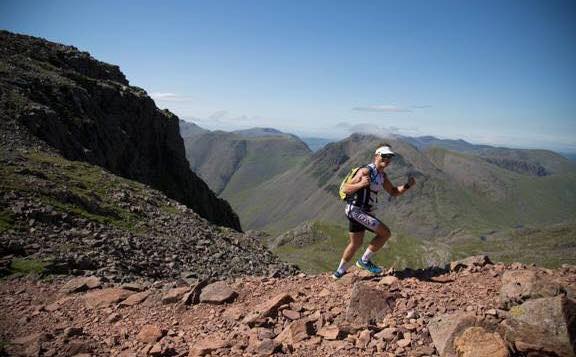 Onto the run and as I’m running out, 3rd, 4th and 5th are coming in so the punctures had obviously brought us all closer together; Damn! Luckily for me the run is normally my strongest point in long distance races and I soon caught the leader at 3 or 4km. We exchanged a few kind words and then I pushed on, wanting to try to distance them all before transition T2A. This was a second transition on the run at about seven miles just before the mountain section begun. Here I changed from my road trainers to my Trail shoes, as I knew these would deal with the terrain a lot better.

Onto the trail and mountain section and I went as hard as I could thinking ‘out of sight, out of mind’ and looking back, I probably went too hard as I really suffered on the last seven mile return leg from the same T2A transition.

The scenery on the run was amazing, clear blue skies on what must have been the hottest day of the year. Checkpoints are scattered on the mountain section where you have to give your race number into a marshal to confirm you are still on the route and feeling ok. As I approached the mid Scarfell checkpoint, Barry and Janice were already up there after taking an early morning stroll. It was great seeing them and to have someone I knew giving me encouragement, it raised my ebbing spirits. Barry ran up with me to the summit telling everyone what I was doing: “this is Steve, he’s swam 2.4 miles in Windermere, biked 112 miles including Hard Knott etc and now he’s running up here”. All the ramblers were cheering me and giving me high 5’s all the way up, it really was an amazing feeling. But, I still had to get back down to the finish line. 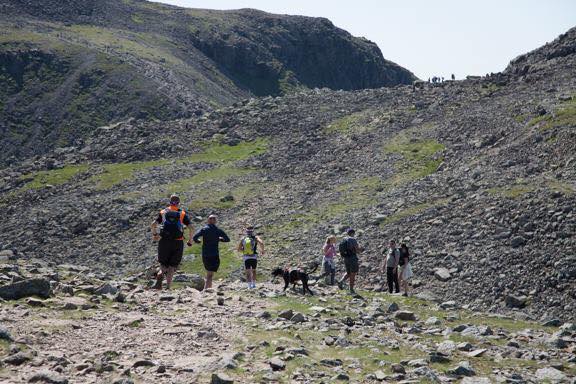 At the top I clocked the time… 29 mins past the hour and then timed on my way down until I saw second place coming up. “9 minutes” I thought, wow that means I’ve got around an 18-minute lead. Surely I couldn’t mess this up?! So, I just focused on getting down quickly but safely as a trip or fall and the 18-minute lead would soon diminish. I must mention all the other Triathlon X racers here; nearly every single one of them coming up gave me encouragement and congratulated me. This is the true spirit between racers in an event like this and huge thanks and kudos to you all.

Once back at T2A again, I just wanted the race to be over. I was cooked and barely able to keep up a slow jog. I was baking from the relentless sun. I saw my wife and friends again with about five miles to go and this gave me a huge lift. Coming in to the finish was an amazing feeling to know I was going to be the winner of this race. 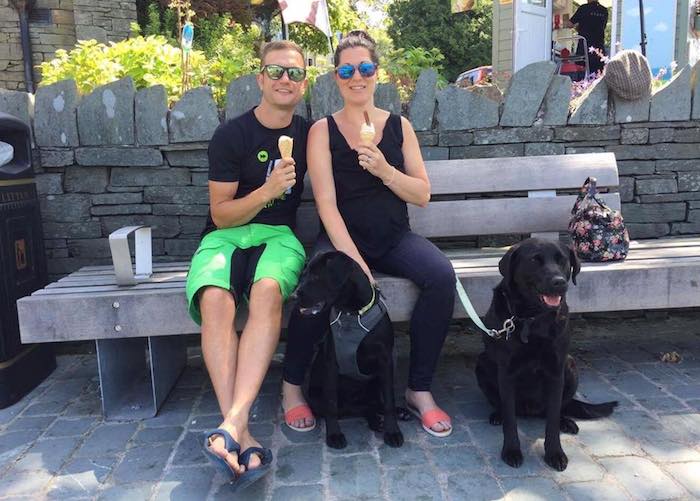 Looking back on this race it really was exceptional. Having to push myself to the limit, mentally, physically and skillfully more than in any other race I’ve done. Any other challenge in the future, after this experience, will surely be easier and I’m so proud to have won.

As always huge thanks to sponsors Britcon, Paragon Cycles, Metres to Miles, NL Council and Off That Couch Fitness. Friends and family that came to watch Team Dobbers, Team Holmes, Jayne, my Dad and most of all Emily who had to suffer all weekend in the heat whilst been 27 weeks pregnant. 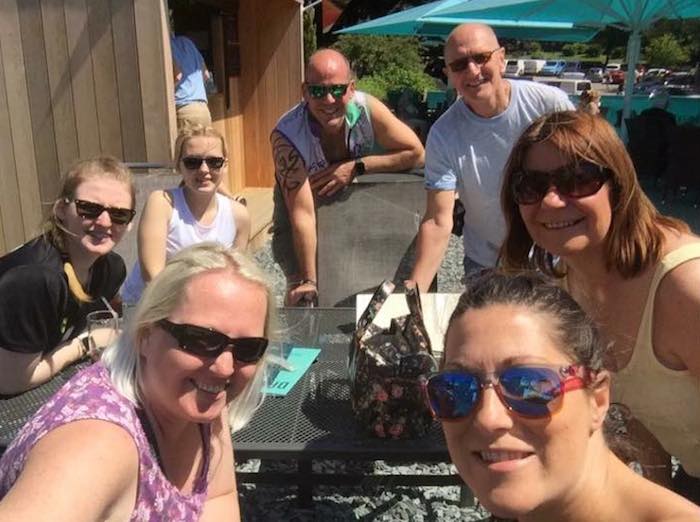