(Press the play button above to watch the full video)

We had an interesting email a couple of weeks ago from Xavier Disley, the founder and Director / guru / technology geek (!) behind AeroCoach (www.aero-coach.co.uk). Xavier is one of the ‘go to’ men in the industry on all things aerodynamics, technology, clothing and more, that are influencing many cycling and triathlon developments around the world.

They were heading to the wind tunnel at the new Boardman Performance Centre in Evesham to do some interesting research which had a fascinating triathlon connection. How would two classic and innovative 1990s bikes perform when measured against a modern superbike, which was produced within the more restrictive UCI rules?

Would we like to come along and watch it all happen? You bet we would… and so last Thursday we headed up the M40 to Worcestershire, to see how the data stacked up.

The modern bike would be one of the benchmark triathlon and time trial machines of recent years – which still performs fantastically – the Cervélo P5. The actual frameset being tested was previously owned by Frederik van Lierde, who also won the 2013 IRONMAN World Championship on a P5. It’s a bike with a well proven heritage. 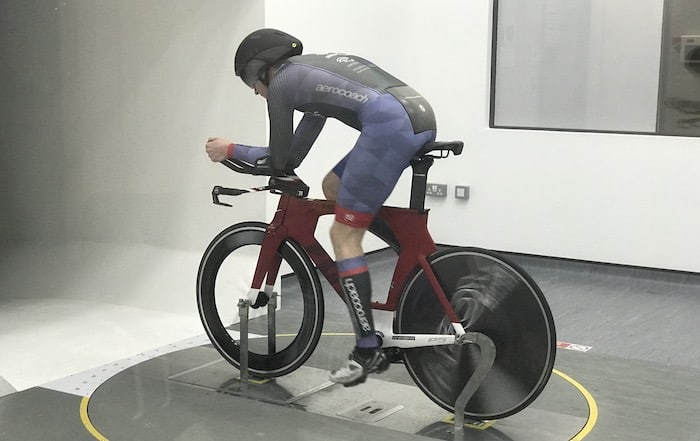 The Cervélo would be tested against two 90s machines, the Zipp 3001 beam bike and – quite appropriately given the location and Chris Boardman’s connection to the brand – a Lotus 110. 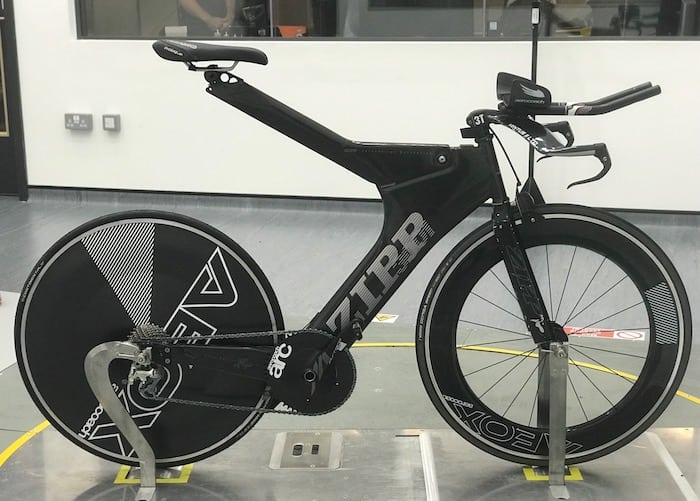 Chris Boardman famously won Individual pursuit Gold at the 1992 Barcelona Olympics on a Lotus. He later set the Hour record (which still actually stands, now known as the ‘UCI Best Human Effort’ or ‘Ultimate Hour’, prior to rule changes introduced in 2014), of 56.375km, utilising the “superman-style”.

The Lotus 110 (pictured below) is the road/TT version of that iconic machine designed and developed by Mike Burrows / Lotus. 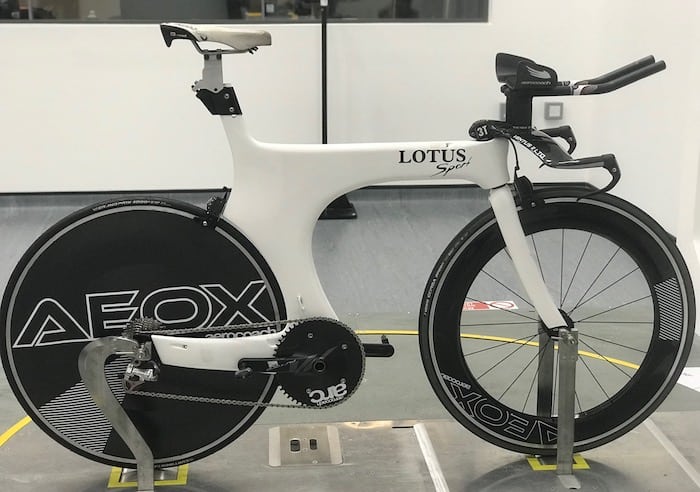 *** WATCH THE FULL VIDEO ABOVE FOR THE BEST INSIGHT ***

The same rider, Alex, rode all three bikes in the same kit in the same position on all bikes, which is why you’ll see additional risers on the tribars on the Lotus, due to its lower stack height. While the P5 comes with integrated Magura brakes, the Zipp and Lotus had TriRig Omega X calipers.

Testing was carried out at a range of yaw angles from 0 to 15 degrees in 2.5 degree increments (the bike is attached to a rotating force plate within the wind tunnel). The yaw angle in simple terms reflects the effective wind angle that the rider experiences (a combination of the direction and speed of travel, with the direction and speed of wind).

Looking only at ‘head on’ aerodynamics does not give a complete picture, with most considering the 0 to 10 degree range is reflective of the typical range of yaw angles you would experience in the real world. 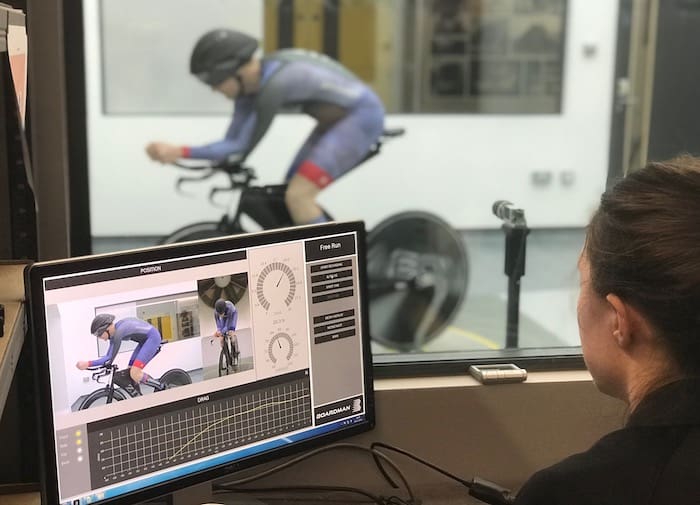 It was close… but modern wins. Watch the short video below for Xavier summing up the results, the initial findings and his thoughts shortly after the testing was completed. 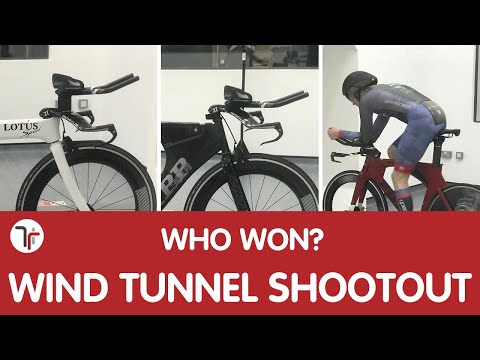 Every aero data-geek likes a graph, right? First up, the CdA (Coefficient of Drag area), for each of the three bikes – with rider – across a range of yaw angles from 0 to 15 degrees. Aerodynamic drag is the major resistive force slowing you down on a bike, applying to both the bike itself and to a much larger degree, the rider. In simple terms, the lower your CdA the more aerodynamic you are, and the faster you can ride with the same power output.

As we can see here, the P5 out-performed the Zipp and the Lotus at all yaw angles. 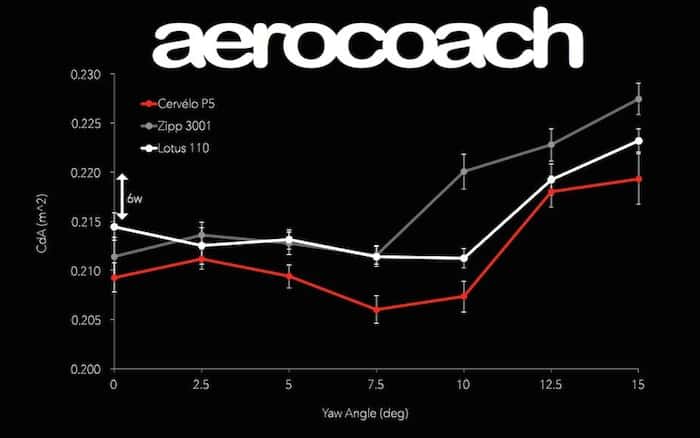 Next, taking that data and converting it to power outputs (watts) required to travel at 45kph. This highlights that the Zipp 3001 and Lotus 110 were very close in terms of performance. The Cervélo was a clear winner – but the margin of victory was relatively small (four to five watts difference), suggesting that these 20+ year old bikes were still impressive performers, despite the advances in technology and developments over the past two decades. 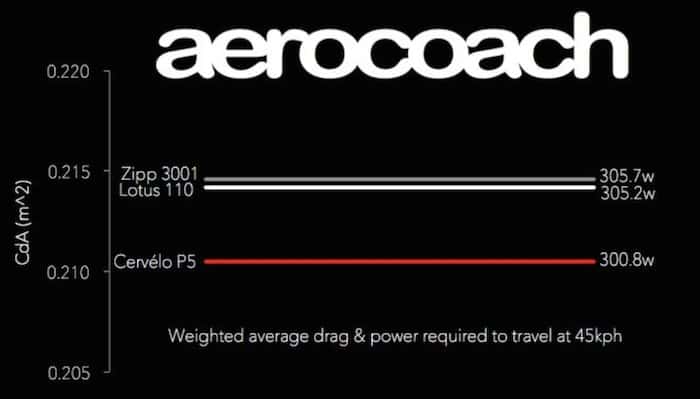 Ok, so unless you are Cameron Wurf or Andrew Starykowicz, the chances are that you are unlikely to be completing an Ironman at 45kph average. So, what advantage might the P5 (in this example, for this rider), have over the Zipp and Lotus for a more typical Age-Group athlete, all other things being equal?

“For this athlete completing an Ironman bike split in five hours on the Cervélo, their power requirement would be just over 200 watts. That same physiological performance on the Zipp/Lotus would see them finishing approx. 1.5-2 minutes slower. For a six hour Ironman athlete, that time saving would be approx. 2.5-3 minutes.”

There is another interesting aspect to perhaps consider too. One of the advantages of the Zipp frame is that some athletes can find it more comfortable over longer distances because of the elastomer suspension of the beam. That 1.5-2 minutes ‘saving’ could easily be wiped out if back pain means you are not comfortable enough and have to sit up out of the aero position regularly.

A fascinating result all round really. The modern classic, the Cervélo P5 – designed within the restrictions of the current UCI regulations – still performs faster than the two competitor bikes in this test. And that is measured against restriction free designs considered ground-breaking in their day.

At the same time, that we are two decades further on and these ‘old’ bikes still measure up well against a “cream of the crop” bike that you can buy today, means that should you be lucky enough to have one, you can also be quite content with your ride too.

A big thank you to Xavier and his AeroCoach team (Jessica Rhodes-Jones and Richard Bussell), for their invitation to follow this testing in person. Thanks for your time and answering our (many) questions on the day too. We’ve got more content coming from the day to be released soon.

For more information on AeroCoach, follow them on these links: