RideSocial, the worlds first interactive 360 video app for indoor riding has been launched by the makers of RunSocial

If you needed another reason to press the “ORDER NOW” button on a smart trainer this winter then here is one: the makers of RunSocial have just announced the launch of RideSocial, the world’s first interactive 360 video app for indoor riding.

The App is available FREE on iOS & Android and comes with a selection of free video routes to download for regular and 360 formats.

RunSocial hit the headlines in 2016 when British ESA astronaut Tim Peake used it to run the digital Virgin Money London Marathon on the International Space Station. Taking the same concept into cycling, you can choose from real-world video routes, ride with other avatars live and immerse yourself into cycling paradise all from the comfort of your front room (or garage…). The YouTube promo gives you an idea of the quality of the video: 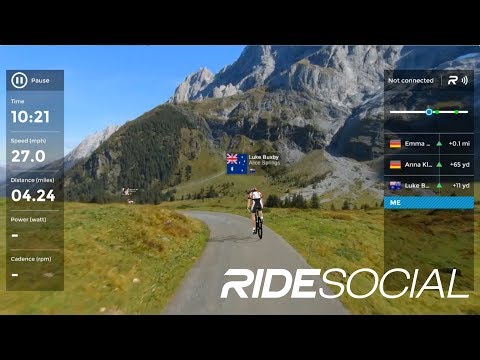 On the app there are three VR/360 videos and five with regular video:

“You already know our dreadmill busting app RunSocial. Now you can enjoy the same for your indoor bike rides with RideSocial. See and race avatars of other riders live and take in the views of real world locations for both regular and 360 VR video routes. Our Full Dashboard shows a leaderboard of others: if you’re slower it’s red, if you’re faster they go green (with envy, no doubt!) Or you can switch to minimum dashboard and enjoy the view.”

The app is available FREE on IOS and Android. We will be looking to use the app over the following months so If you are or planning too then please do get in touch via social media and let us know what you think, you can find us on facebook HERE and twitter HERE.