British pair start 2018 on a high note in South Africa

The Cape Town ITU Triathlon World Cup was a successful race for British Elite women 12 months ago, when Lucy Hall and Jessica Learmonth sprinted to the finish to secure first and second. No sprint finish this time around, but it was another Gold and Silver for Team GB.

In normal circumstances, we’d probably not expect to see either of Vicky Holland for Non Stanford racing so early in the year. However, both had frustrating seasons in 2017 with injuries which curtailed their racing ambitions. Add in a major early season target for both of the Gold Coast Commonwealth Games and the desire to race early (and well) was high. Both will be very satisfied with their day in Cape Town. Cheques of $7,500 an $6,000 respectively, will have added to their smiles.

The sprint distance race saw Stanford (second) and Holland (fourth) right at the sharp end of the race after the opening 750m swim, which was lead out by Zsanett Bragmayer (HUN).

The British pair pushed the pace early in the ride and a group of six would pull clear and start the closing 5km run with a 50 second lead, with the Brits joined by Bragmayer, Simone Ackermann (RSA), Melanie Santos (POR) and Rani Škrabanja (NED)

The lead six have almost a minute on the chasing pack through T2, @NonStanford leads, but can Simone Ackerman (RSA) deliver a crowd-pleasing finale? #CapeTownWC pic.twitter.com/K0k85RZS86

Holland pulled away on the run to a clear victory. Her 16:36 split was only bettered by Ai Ueda (JPN), who managed a 16:26 to move up to tenth place during the run. Stanford took second (17:13) with swim leader Bragmayer completing the podium.

No words for this feeling ⬇️. So DAMN good to be back out there racing hard from gun to tape! Plenty to work on, but so happy to start 2018 with a win… and sharing it with @NonStanford is just the BEST!! 👯‍♀️😃 pic.twitter.com/V5ydUebpXN 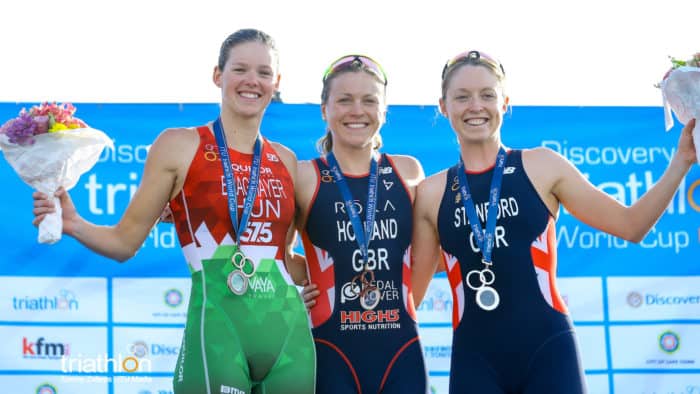