Again, close racing was the order of the day with some very tired bodies at the finish line after less than 15 minutes of all-out effort (raced twice through).

The Youth Boys race saw Jack Stanton-Stock – recent winner at the British Triathlon Under-20’s Festival – take a small, but potentially significant lead out on to the run – but while it was enough for a podium finish, it wouldn’t prove to be enough to secure the win.

The victory went to Daniel Dixon, a winner this year on the ETU Junior European Cup circuit, who ran through from T2 to cross the line four seconds ahead of Hamish Reilly.

I spoke to Daniel shortly after his race about his Jersey experience. 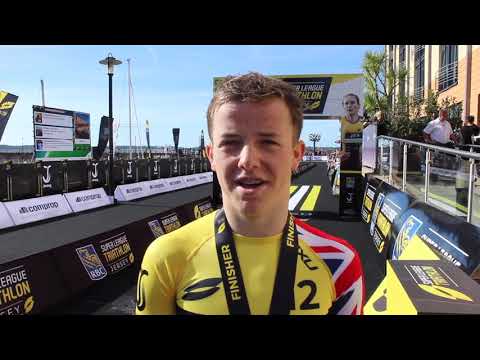 The Youth Girls was also a close battle with Isla Britton taking the top step on the podium ahead of Germany’s Francesca Henseleit.