As you may well have seen yesterday if you were close to any triathlon-related social media, the hottest topic around was this article on the SputnikNews.com website. The article suggests that Olympic Bronze medal winner in 2016, Henri Schoeman (RSA), provided an Adverse Analytical Finding (AAF) in Rio for the prescribed steroid medication, Prednisolone (see Wikipedia link).

An AAF is not, by default, the same as an Anti-Doping Rules Violation (ADRV), per the World Anti-Doping definition:

First, these figures may contain findings that underwent the Therapeutic Use Exemption (TUE) approval process. In addition, some Adverse Analytical Findings may correspond to multiple measurements performed on the same athlete, such as in cases of longitudinal studies in testosterone (i.e., tracking the testosterone level of one athlete over a period of time).

A ‘glucocorticoid made from hydrocortisone (cortisol)’, Prednisolone is quite commonly, and successfully, used to treat a wide range of symptoms including allergies, inflammatory conditions, Crohn’s disease and many more.

Of itself, its use isn’t completely banned – checking the Global DRO drug reference database – Prednisolone when used out of competition (irrespective of the route of administration), is not prohibited. The situation is different in competition however. If the administration method is any of Rectal / Oral or by Intra-muscular of Intravenous injection, then it is prohibited. In such instances, to gain approval for use would typically require a Theraputic Use Exemption (TUE). 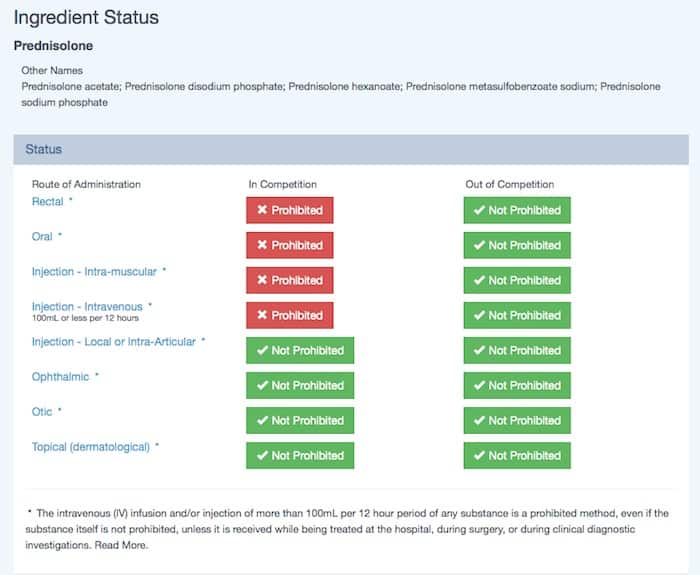 What is not at question is, “Did Henri Schoeman use Prednisolene?**”. That is – at least on the evidence provided by the Sputnik website – fully accepted, given that it was declared by Henri himself on the Doping Control Form (DCF), signed by Henri on 18th August 2016 (the day of the Olympic Games Triathlon, so this would have been post-race testing).

(NOTE** – There is also variation in the documention in relation to what was apparently declared, ‘Prednisone‘ and what – again, based on the emails referenced in the Sputnik article – caused the original adverse analytical finding (AAF), ‘Prednisolone‘. Different spellings of two different – but very similar – drugs. That difference would appear to not be considered significant here, given that Richard Budgett, the Medical and Scientifc Director of the International Olympic Committee says, “he did declare it” in the email chain provided by Sputnik.)

What does seem a little odd (a genuine error made at the time? a poor scan of the form?), is that the written declaration of the form appears to say, “Prednisone 10mg to 17/7/2016 10pm”. Given the question asked is “List all medications and nutritional supplements taken during the past seven (7) days and (where the sample is collected as a blood sample) and blood transfusions received in the past three (3) months.”, it seems quite possible that there may have been an error in completing the form, listing 17/7/2016 rather than 17/8/2016 (the eve of the Men’s Olympic Games Triathlon).

What is also not in question is that, immediately prior to the race in Rio, Henri Schoeman was sick:

Tues – In bed, in tears, unable to train because of a fever.

So where does that leave us? Well, depending who you believe (HERE), “Sputnik engages in bias and disinformation.” Given what we have seen across a wide range of sports in recent years, simply ignoring a source would, in my view, be bias of itself. Does it present all of the facts? I don’t know the answer to that one, but trying to level the “It’s just Russia trying to get its own back”, might well be naive too. If there is a case, it should be answered.

Was there a Theraputic Use Exemption? Was the TUE raised appropriately and correctly? That would appear to be the missing link. There is a whole other discussion (most of it going on, right now, on Twitter…!), as to whether TUEs, generally, should be allowed. A fair discussion, and one which the last few years have highlighted, an area which has almost certainly been abused – across many sports – for many years. Few, if any, believe that the current TUE process should not be questioned and that revision is due.

However, I think the situation has to be black and white – and that is difficult in an area which, of course, generates so much emotion. Whether you ‘believe’ TUEs should be banned totally, only allowed in the most exceptional situations or that the current model is works fine as it is, that opinion cannot be the basis upon which an athlete is judged, against the rules that were applicable at that time. Have the rules been broken? Has process been followed? Is there a case to answer?

I don’t know that answers to those questions, but if a medical team has prescribed a widely used medication which they would be well aware would require the appropriate authorisation to use, at an Olympic Games and then not followed due process, then they will have questions to answer – perhaps bigger questions than the athlete under their care.

If that ‘missing link’ was indeed covered in line with the rules – which, given the lack of subsequent action, one would assume (hope?) to be the case, otherwise the ‘cover-up’ conspiracies really will have legs – then the AAF would not have constituted a “positive test”. Even that won’t satisfy some – which is where that emotion comes in.

The ITU’s statement on the information in the Sputnik News report is produced in full below.

ITU Statement on an adverse analytical finding in Rio 2016

ITU has been informed of allegations involving Henri Schoeman and an adverse analytical finding that would have occurred during the 2016 Rio Olympic Games.

ITU has promptly launched an investigation into the matter. ITU has been in touch with the Athlete, who is fully cooperating providing information.

It should be noted that ITU was not the testing or results management authority for this sample. Pursuant to the Rio Olympic Games Anti-Doping Rules, for all samples collected during the Rio Olympic Games, the IOC was responsible for the testing programme and the CAS Anti-Doping Division is (as of Rio 2016) responsible for the results management and sanctioning of an athlete as far as Olympic results are concerned. See: https://www.olympic.org/news/ioc-makes-doping-results-management-and-sanctioning-independent.