Lucy Gossage: The Patagonman “experience of a lifetime”

“There is always a way to find a new challenge…

…Patagonman has reinvigorated my lust for adventure”

A week ago (HERE), Great Britain’s Lucy Gossage crossed the line first to win the debut edition of the Patagonman Xtreme Triathlon (www.patagonman.com). That was the thirteenth time that she has won an iron-distance race in her career – but, in this instance, statistics and records are not important.

As you can read below in her own words, for Lucy this was an event that made her “feel the luckiest pro on earth”, an experience of a lifetime that went way beyond times, positions and analysis of performance.

She suggested 12 months ago that Patagonman “would be an amazing ‘retirement’ race”… and answers whether that will indeed be the case here too.

Patagonman. Not a race but an experience. An experience of a lifetime and one that has made me feel the luckiest pro on earth. I’ve been part of and have won some incredible races over the years. This was different. The whole trip and the whole day was an adventure. The race took me out of my comfort zone. And it reiterated to me why I have kept going at triathlon for so long. There is always a way to find a new challenge.

It’s impossible to describe the beauty of Chilean Patagonia. Sensory overload is the closest I got. It combines the best bits of some of my favourite places in the world and then improves them. New Zealand. Africa. The Alps. Thailand. California. It’s hard to imagine anywhere more beautiful. And quiet. I spent an afternoon lying on a pontoon next to a lake and didn’t hear anyone. You can hike for a day and may see another group of hikers if you’re unlucky. Without people around you appreciate the sounds and the smells so much more.

The race itself was unlike anything I’ve done before. It’s point-to-point. You all start jumping off a ferry into a fjord and swim back. You bike 175km down pretty much the only continuous section of paved road in Chilean Patagonia. And then you run a marathon on trails and rubble roads to the finish in a tiny little village on a lake. There were less than 200 starters so it’s friendly. Everyone talks to everyone. Nobody is special. 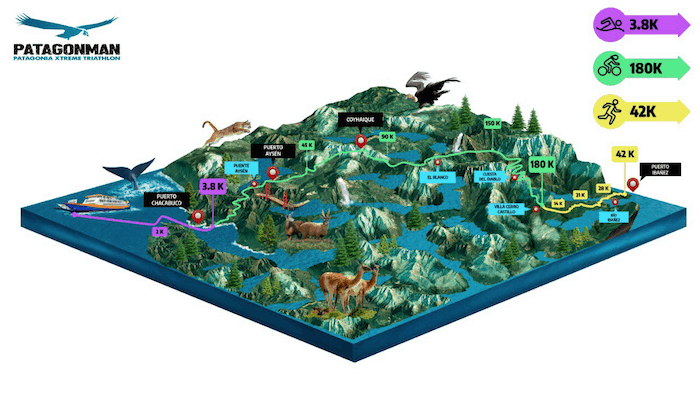 If Ironman starts are exciting, the atmosphere on the ferry was electric. You had the worried guys sitting silently with their own thoughts. You had the serious guys. And then you had the nutters like us having a disco and karaoke on decks. ‘Viva Chile, viva Chile’. Nervous adrenaline turns into crazy ladies at 4am. That’s one highlight. Jumping off the boat in the dark is another. In terms of memories, this is equivalent to walking into the water on Kona race day. Words can’t do it justice. Shivers down my spine. 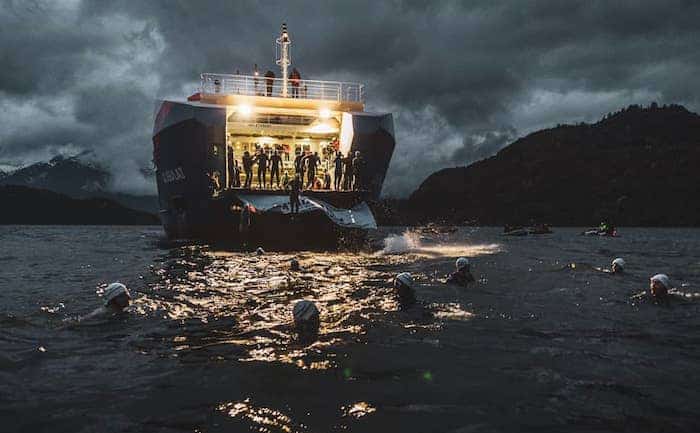 Riding solo with quite literally nobody in sight for miles ahead or behind was special. Unlike Ironman there aren’t aid stations every few miles. You can meet your support person (I had an incredible Chilean helper called Jandri, who was simply amazing), at 45km and 135km and there is a water station at 90km. I had opted to take a spare tub in my rear bottle cage so stopped each time, drank a bottle and then refilled my aero carrier. The bike course is tough, but no more so than Lanzarote or Wales, other than the potholes, street dogs, rubble section (roadworks) and cobbles and though it was super windy, overall I think we benefited from this. You’ll get tired but when you do, you just sit up, look at the view and you’ll be revitalised.

T2 is literally just a few people standing around in a village. No racks. No bags. No tents. Lots of cameras. ‘Don’t look’ I yelled (Jandri translated, I think), as I pulled off my tri-suit and put on some running shorts. I’m sure someone has a photo of me standing naked in the middle of nowhere. And then off I go. Now I hadn’t read the race manual until I got on the plane. And I hadn’t twigged at all, that, when they said trail, parts of it were proper trail. And that when they say you’re crossing a river, you are actually crossing a river (above my knees). And that there were only three water stations at 10km, 20km and 30km. So if you do Patagonman next year, learn from my mistakes. Wear trail shoes and carry a hydration system. Despite suffering in the heat this was by far the most enjoyable run I’ve ever done. I passed one guy but other than that saw nobody for 30km. I felt like an ultra runner. Me versus the elements. Simplicity. No crowds. No cheers. Just the sound of nature and views more stunning than you can imagine. I realised on this run that I absolutely don’t keep racing because I can still win. I keep racing for experiences like this. I race for challenges; for adventures; for memories that money can’t buy.

Triathlon has taken me to some cool places but this trip caps them all. Patagonman: The race at the end of the world that will give you the experience of a lifetime.

Now that would be an amazing 'retirement' race!

This time last year I tweeted that Patagonman would be a great retirement race. And I stand by this; I won’t be calling myself a professional triathlete in 2019. But you will see me on some start lines of some crazy challenges. Doing events that capture my imagination, take me to cool places and take me out of my comfort zone. If anything, Patagonman has reinvigorated my lust for adventure. And who knows where that will take me.

You can find out more about the Patagonman Xtreme Triathlon on these links: