Tim Don IS going to Kona after all…

It’s not the first time that Tim Don has been written off!

After we (and indeed, Tim himself), assumed that his attempt to qualify for the 2018 IRONMAN World Championship in Hawaii was over after his DNF at Sunday’s IRONMAN Copenhagen left him just outside the automatic qualifying slots in the Kona Pro Rankings (KPR), news here from Tim himself that the dream is still alive.

The past weekend represented the final weekend of qualifying, and from Tim’s Instagram post (below), with athletes ahead of him not taking up their option, he has indeed earned his place on the start line at Dig Me Beach on Saturday 13th October.

We expect the full details of the final Kona start list will be published relatively soon.

Further to Tim’s posting, the KPR table (HERE) has now been updated to confirm Tim’s qualification and acceptance of his slot (check out the green ‘Q’ below). That confirms that Jonathan Shearon (USA), did not take up his option, leaving Tim as the first athlete in terms of rolldown.

What that also means… is that Matt Russell, the athlete also suffered an awful bike crash in Kona (DURING the race, when a car pulled out on to the course), is now in the ‘first athlete to miss out’ position, just 15 points behind Tim. Should an athlete that has already accepted a slot withdraw, I believe that Matt would be next in line to fill that position.

When you consider the life-threatening conditions that both Tim and Matt left Kona with last October, to have got back to this position is remarkable. 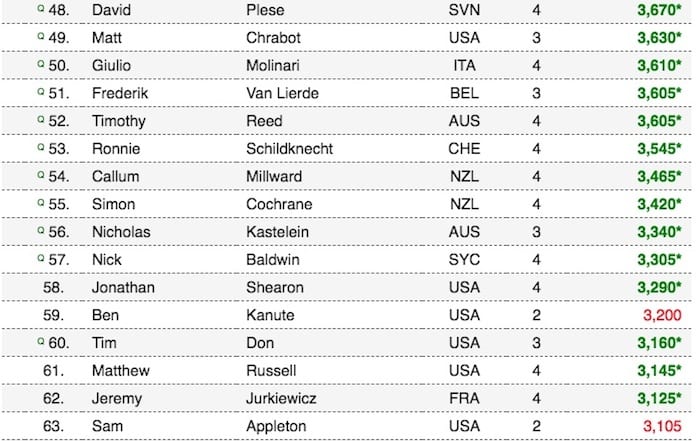