With 50 days to go, official Glasgow 2018 Triathlon Ambassador – and defending European champion – Jessica Learmonth, today unveiled the medals that will be presented in the sports of Athletics, Aquatics, Cycling, Golf, Gymnastics, Rowing and Triathlon.

It is the coveted prize every athlete wants to go home with and to mark 50 Days to go to the 2018 European Championships, the medals to be presented in Glasgow and Berlin were revealed to the public for the first time.

The countdown to Europe’s biggest multi-sport event of the year is well and truly on and it was Jess Learmonth, freshly announced as the official Glasgow 2018 Triathlon Ambassador, who had the honour of unveiling the specially commissioned Championships medals.

30-year-old Jess is originally from Leeds and is based at the Leeds Triathlon Centre where she trains alongside the Brownlee brothers as part of the GB squad.

Jess, known for her swimming and cycling power and speed, won her first major international title in June 2017 at the ETU European Championships in Kitzbuhel, Austria. She went on to take a silver medal in both the women’s individual and mixed team relay events at the Gold Coast 2018 Commonwealth Games. She has also won three medals at ITU World Series events in 2017/2018.

Reigning Triathlon European Champion, Jess Learmonth, ran into George Square in Glasgow this afternoon to deliver the medals for their first public appearance. Enthusiastically welcomed by pupils from the Glasgow School of Sport, St Mungo’s and Caledonia Primary School, the medals were presented to three aspiring young athletes who are part of the #2018InspireMe campaign by Sports Minister Aileen Campbell and Councillor David McDonald, Depute Leader of Glasgow City Council.

Jess was joined in George Square for this special event by local triathlete Marc Austin, who won Team Scotland’s first medal of the Commonwealth Games at Gold Coast 2018. Also in attendance was Martyn Rooney, a multiple European medallist in both 400m and the 4x400m Relay for GB, representing the Athletics being held in Berlin.

Jess and Marc hope to be two of more than 3,000 athletes who will be competing across six sports in Scotland from 2-12 August 2018, whilst Martyn has his sights set on being one of 1,500 competitors in the Athletics in Berlin, all aiming to win the coveted title of European Champion.

At any major championship, the medals awarded are a powerful symbol of the sporting excellence achieved by each athlete. They will be worn with pride, not only when presented on the podium at the Championships, but when athletes travel back to their communities across the continent and share their success with other young people, inspiring them to follow in their footsteps.

The unique, beautifully crafted medals have been specially designed by Touch of Ginger, for this inaugural multi-sport event, as the unifying element for the seven individual European Sports Federations and will be a lasting legacy of the event’s first edition.

The medal design is bold and dynamic with a contemporary triangular prism form inspired by the European Championships emblem. The front features a stylish 3D interpretation of the Championships brand whilst the rear displays the participating sports federation logo along with event specific data in a clever facetted design. Each medal is hung from a ribbon featuring a striking crystal design that builds to a full spectrum of rainbow colours that capture the spirit of this multi-sport event.

Who’ll take the goods at #Glasgow2018? Make sure you’re there to find out 👉 https://t.co/O2RVsHGLr8 pic.twitter.com/j3L0OYopIf

Thrilled to be the first athlete to see the medals, Jess Learmonth said: “The fact that my first major international title was winning the 2017 European Championships, makes being an Ambassador for the Glasgow 2018 even more special and I will be going all out to try and retain my title.

“Every athlete wants to win a medal at a major championship, so to be here today to unveil the medals for Glasgow 2018 is really exciting and to be the very first athlete to set eyes on them is really special.

“I love the medal design I think it looks amazing. It is very contemporary and reflects the unique Championship ‘crystal’ logo really well. I particularly like the fact that it is the same medal design for all seven sports, but then personalised to each with the sports own logo on the back. It is a great way to unify all the athletes across Europe, striving to achieve the same level of sporting excellence.” 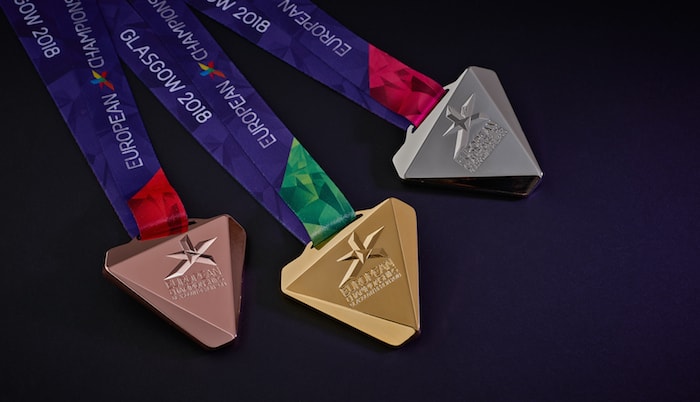 Sports Minister Aileen Campbell said: “With fifty days to go until Glasgow 2018, the countdown is truly on to Scotland’s next multi-sport event and anticipation is building further with the unveiling of the medals today.  It will be wonderful to see some of Europe’s best competing in Scotland to claim their place on the podium.

“We are on track for a fantastic summer of sport and it is great to welcome Jess Learmonth to our family of Ambassadors and hear the excitement from the athletes.

“The European Championships provide a fantastic opportunity for Scotland to build on our reputation for hosting major sporting events, ensuring a memorable experience for athletes, officials and fans alike.”

Depute leader of Glasgow City Council, Cllr David McDonald said: “With just 50 days to go, athletes all over Europe now have their sights firmly set on these medals and sporting success in Glasgow.

“For winners, they will be the ultimate reward for years of hard work, sacrifice and a single-minded dedication to their sport.

“They will also be a lasting symbol of the Championships that will be seen around the world and help to inspire young athletes to follow in the footsteps of their heroes.”

The Cambridge based design agency specialises in the design and manufacture of medals, trophies, branded merchandise and unique souvenirs for global sporting events, The business has established a reputation within the sport industry being involved in major events such as the London 2012 Olympics, Rugby World Cup 2015, European Aquatics Championships, Rio 2016 Olympics, Glasgow 2014 and Gold Coast 2018 Commonwealth Games.

There is still time for the public to book their seats to enjoy this truly world-class festival of European sport and to see the medals presented to the winning athletes.