IRONMAN Wales on the 9th September 2018 will be the eighth running of the race in Tenby. Having been to the first ever race back in 2011, TRI247’s Paul Shanley has decided its time he actually Faced the Dragon and has signed up for 2018.

Although it was a few years ago, I can still remember my first experience of visiting Tenby and videoing the first (full distance) IRONMAN in Wales. Check out the video at the bottom of this article!

It was clear from the outset that this would become a special race and its no surprise to read on the IRONMAN website the race has been awarded a number of key Athletes Choice Awards for 2017:  Overall Swim, Run Course, Overall Satisfaction, Will Recommend to a Friend, Best Host City Experience and Best Race Venue.

So, what makes it so iconic?

Tenby is based in the South West of Wales and, for want of a better word, is beautiful. A perfect Welsh seaside town, with plenty of history, sunshine, sandy beaches and clear blue seas, it is a busy holiday destination with plenty of hotels and guest houses. Although well set up to cater for visitors, the place is still very quaint.

I can remember getting the train to Tenby back in 2011 and chatting to a couple of locals about how unusual it was to come from London to end up on a train with only two carriages. They all nodded and agreed saying “its very unusual, we normally have just one”… 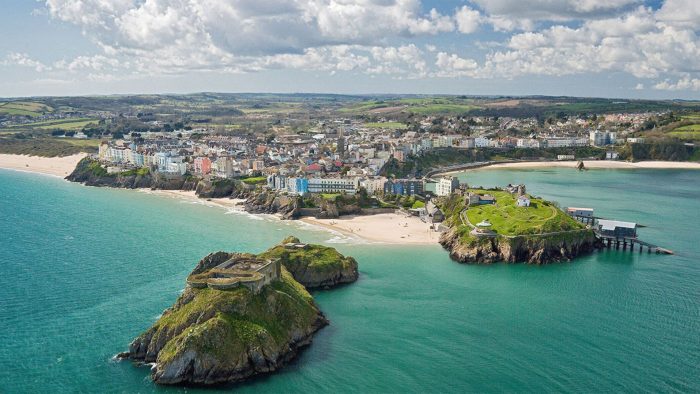 IRONMAN is BIG in Tenby. The whole area knows it is on and on that weekend, triathlon is the talk of the town. If you have an athlete wristband on be be prepared for everyone to chat to you, from the people in the corner shop to the lifeguards on the beach. Tenby loves triathlon and triathletes. And, if you think people are friendly leading up to the race, just wait till race day; the locals are known around the world for their crowd support from early in the morning to late into the night. 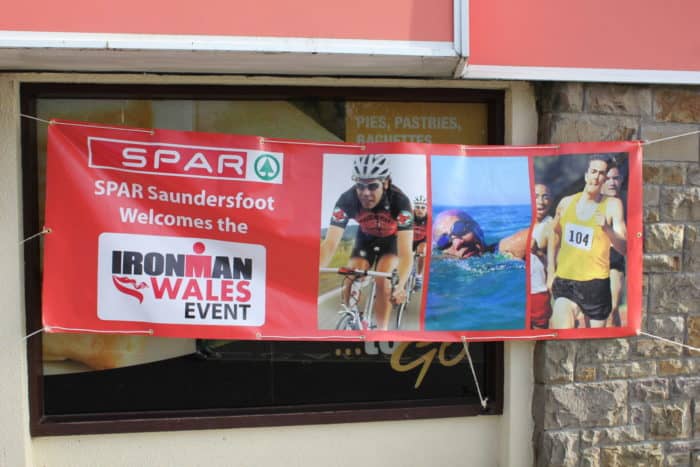 Thousands of nervous and excited athletes in rubber standing on the beach, many more thousands of spectators looking down on the them. Tenby’s North beach is the perfect natural amphitheatre from which to start the race. That alone is an impressive sight but add a stirring rendition of the Welsh national anthem and you are guaranteed goosebumps before you race. 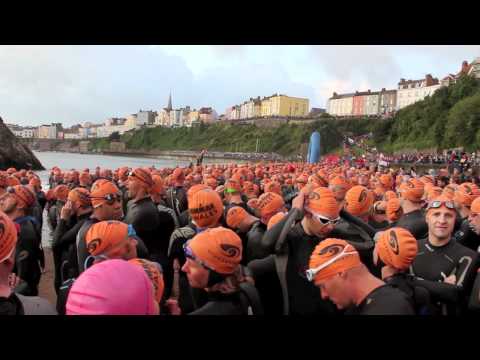 The first year of the race the swim was moved last minute to the North Beach as it added a bit more protection from the elements. The only downside was North Beach was 1km from the T1, so a quick solution was implemented that had the organisers take all the transition bags off T2 transition, move all the racks to the zig zag path leading up from the beach. Competitors were then allowed to rack a pair of trainers to help them run the 1km to T1. After the swim the organisers had to then move all the racking back and add the T2 transition bags and although they had a good bit of time before athletes arrived at T2, I suspect that was probably a nervous and stressful job for all involved.

Thus, an enforced move that made a hard race even harder. What do they do the next year? Yes you know, they kept it in – the athletes loved it and, as far as I know, IRONMAN Wales is the only race with ‘T1a’ transition.

The 1km run to T1 is not the only thing that makes the swim iconic however. The two lap swim in the sea has become stuff of legends and there are plenty of nautical tales of jellyfish, big waves and people getting sea sick from the swell. Although you can’t dismiss these as all nautical fiction (I don’t think anyone has seen Moby Dick yet…) , there is plenty of comfort that thousands of athletes tackle the swim every year and none have been eaten by a jellyfish. Yet 🙂 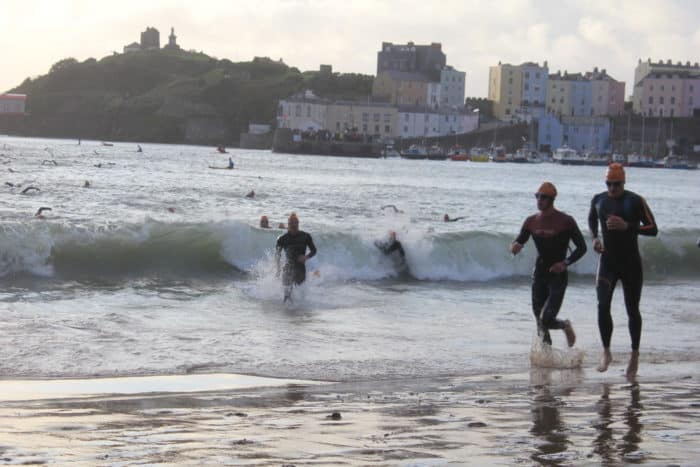 The IRONMAN Wales bike course has made legends and broken people, probably in equal amounts. As bike courses go it is pretty relentless with undulating hills and steep climbs (almost 2,500 metres of net totalling climbing). Add in some unpredictability with the weather (from baking heat to rain and high winds), and you are going to know you have ridden 112miles at the end of this ride. The return for this hard work is some spectacular scenery, world class crowd support and some serious bragging rights if you ride well here. 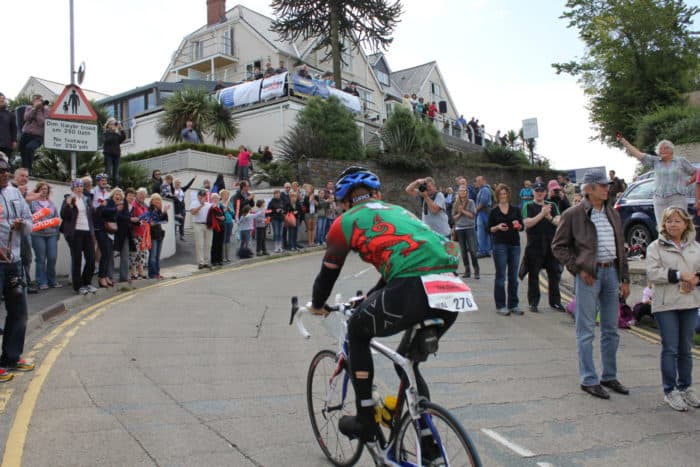 If you are going to have a hilly bike then you might as well have a hilly run and IRONMAN Wales delivers that in abundance – even the finish is slightly uphill. Again the reward for this hard work is you get to run through picturesque Tenby and the crowd support is off the scale. 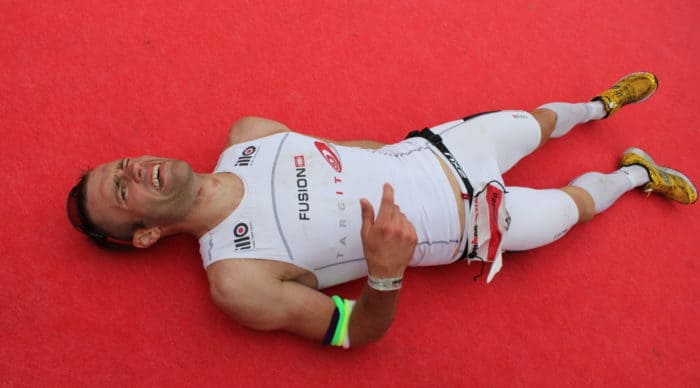 IRONMAN Wales is a tough course – certainly one of the toughest IRONMAN races in the world and that alone would give it iconic status. The race is so much more than tough though, it is an experience like no other and, as far as I am concerned, a must do race. I am approaching the race with excitement and fear in equal measures and hoping that I can cross IRONMAN Wales off my to-do list come Sunday night, 9th September 2018.

If you are racing we have a handy course guide and tips HERE.

You can watch my Mega Montage from the first ever IRONMAN Wales below: 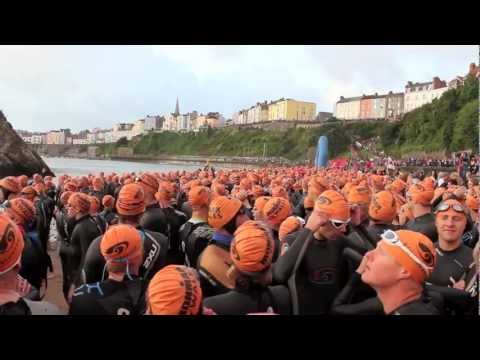