This weekend in Galway sees the open water triathlon season really get underway with Lough Cutra Castle Triathlon hosting 12 races for adults and children with over 1,500 athletes expected to descend on the lake shore castle estate.

In an exciting new addition to the event in Galway, the now two day triathlon festival sees the introduction of the Adult Mixed Relay on Saturday afternon, the format of which is expected to form part of the Tokyo 2020 Olympics. The new format provides for a fast and furious race for teams of four. Free admission to the Junior version of the Mixed Relay is being offered to children aged 8-12 on the Sunday afternoon.

The feature races of the weekend include the televised National Super Sprint Series which is the curtain raiser on Saturday morning, with some of Ireland’s leading sprint distance triathletes setting out to battle for early season racing points on closed roads in a draft legal race. The Adult Mixed Relay on Saturday afternoon is both a National Club Championship and a qualifier for the ETU Championships in Spain later this Summer. 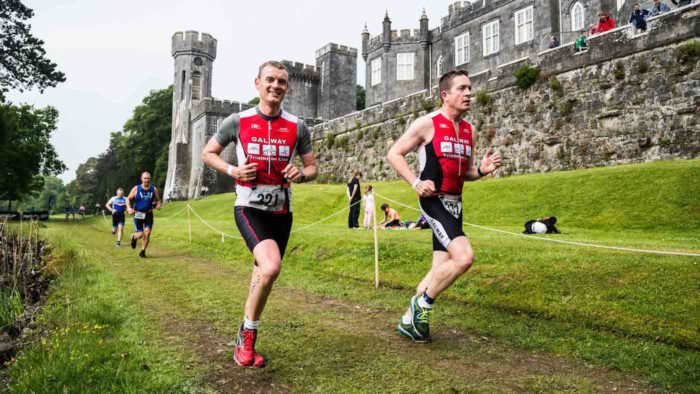 Sunday sees the longer distance racing with the Gauntlet middle distance race offering slots for the 2018 ETU Championships. In addition to the featured events there are a number of Sprint distances as well as an Olympic race for the adults and a variety of junior and childen’s races. With a women’s only wave in one of the many sprint races it’s perfect for the athlete who feels more comfortable racing in a female focused event.

Well known TV personality Deric O’ Hartigan will return to Lough Cutra to race on Saturday and GMIT ‘Tri your Mind’ students will complete their first ever sprint race as part of a special sport and mental health project being speaheaded by Galway Triathlon Club’s Lynne O Loughlin who is also a lecturer at the GMIT Galway campus.

Swimming in the private lake, cycling on the roads around Co. Galway and the infamous Clare Burren before returning to run on the tracks, trails and wonderful woodland of the castle estate, athletes will cross the finish line to the backdrop of one of Ireland’s only privately owned castles.

With distances to suit everyone from the nervous swimmer to the uber biker, the complete beginner to the podium chaser there is an event to suit all ages and abilities. There are lots of activities on site for spectators and supporters of all ages, from climbing walls, festival expo and live entertainment both on and off the course.

For more infomation on the events or book your race place log onto www.loughcutratri.ie