Despite a weekend of racing which, in the UK at least, could be summed up with the words ‘cancelled’ and/or ‘postponed’ – courtesy of the weather – a few events did manage to go ahead.

Despite the best efforts of the “Mini Beast from the East” we pressed on and put on one of the few events to survive the weekend’s weather, and we are certainly glad we did. Despite all of the recent weather we managed to deliver the same course as last year with a few subtle changes to avoid the odd fallen tree. With a dusting of snow it made for a challenging course.

Race day was cold and blustery but remained dry, the cool weather certainly got people moving! The course itself was reasonably firm underfoot with only small patches of ice to avoid on the bike course and the dogs on the cani trail didn’t seem to mind the weather at all.

As usual, the opening run set off along the northern bank of the Little Ouse before heading over the river to tackle the forest trails. In the Duathlon race, Iain Robertson was first to arrive in T1 after an impressive first 5k. With the fastest transition times and bike split he continued to dominate the field and came in first in a time of 1:14:05, only four seconds slower than last year! Second place went to Henry Sleight, only 1:14 behind Iain and having been strong in the run. A slightly slower bike dropped Lester Allen into fourth but he fought back strongly on the run to claim third.

The women’s race was equally as exciting with precisely two minutes separating first and second place, with Becky Schofield grabbing the top spot for the ladies in 1:27:12 and Jessica Sleight in second place in 1:29:12 having virtually mirrored Becky’s split times only losing out to Becky’s slightly faster run times. In third place was Samantha Toop with a great time of 1:35:44. The cold weather meant that we made the decision not to ask the winners to wait for a prize giving photo.

Two teams battled it out in the Duathlon Relay with a great result for James Fraser and Alex Dale from Walden JNR Tri crossing the line 1:22:02 in first place. A last minute entry in the relay from the pairing of Sarah Birchenhall and Katie Beasley saw the girls come home in 2:18:22 greeting each other with a big hug on the finish line.

Some impressive times were achieved in the 10k Trail race with Neil Pollard taking first place in a time of 38:00 one minute and 38 seconds faster than his winning time last year, even more amazing given the conditions. Jason Wing arrived in second place closely followed by Anthony Shelton in third with less a minute and a half separating the two. First lady home in 13th place was Sue Woods in a great time of 54:12. Zoe Bridges was second lady to complete the 10k course 00:56:30 followed only 24 seconds later by Denise Yard. 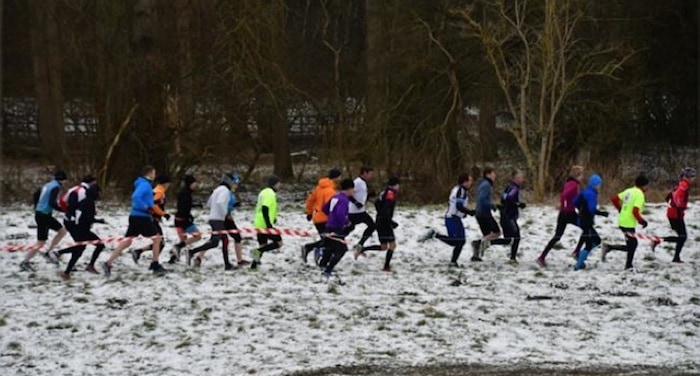 Once again, we were joined by our Canine friends for the 10k trail run. It is always a great event to witness. The race began to the barks of the excited canine runners as they set off across the field and made their way around the 10k course.

First back was Mark Wakeling and Fizzy in a very respectable time of 38:49 improving on his second place finish last year, followed closely behind by Colin Jess and his canine companion. Third place went again to Clark Midgely in a time 42:51 minutes, quicker than he was last year! Donna Fiddeman finished first in the ladies Cani with her dog Farah, with Rebecca Silkstone coming a close second. Vicki Blackshaw and Finn came in third with all the top three ladies finishing in the top 10. Well done also to all the canines who crossed the line!

Everyone had a fine day out in Thetford Forest with many racers commenting on the great venue, excellent organisation, enthusiastic marshals and all round good value.

Finally, a big thank you to the Forestry Commission who allow us to use the venue, Brendon from Synergist Massage who was on hand to treat tired and weary limbs after the event, Adrian Howes for the event photography, Audrey and her team from Thetford AC for their support and to all the enthusiastic marshals who give up their weekends so that Go Beyond can put on great races.