While I’ll leave judgements on “toughest” (or not) for others to decide, there is no doubting that the weekends Snowman Triathlon, part of the Always Aim High Adventure Triathlon Series, certainly provided a significant challenge for athletes this past weekend at Plas Y Brenin on North Wales.

When a half-iron (ish) distance race takes even the winner more than six hours, you know it is not a flat and fast one…

Record Number of Competitors for ‘the UK’s Toughest Triathlon Race’

Saturday 29th and Sunday 30th July saw a record number of competitors descend on the national mountain sports centre at Plas y Brenin, Capel Curig to take on what is quite possibly the toughest standard and half iron distance race in the country – the Snowman Triathlon.

The pinnacle of the Snowman weekend – The Legend – features a 91 km cycle route through the heart of Snowdonia National Park and includes many of its infamous climbs, the largest among them being the Crimea and Pen y Pass. The run route for the Full and Legend races culminate in a mighty ‘run’ up nearby Moel Siabod – a 2,981 foot peak which casts a shadow over the Snowman finish line below.

Kicking off proceedings on Saturday morning was the Snowman Sprint Triathlon. This closely fought race consisted of a 400 metre swim in Llyn Mymbyr, a 30 km cycle through the picturesque Welsh towns of Llanrwst and Betws y Coed and is rounded off by a tough 5km run along a trail route which skirts the base of Tryfan before heading back to the finish line at Plas y Brenin.

The men’s race was neck-and-neck going into the final moments of the run, but Tomos Nesham took first place, despite a disappointing cycle. Jonathan Milton of Manchester Triathlon Club finished second and GOG Triathlon’s Gareth Bowyer finished third. Less than a minute separated all three. 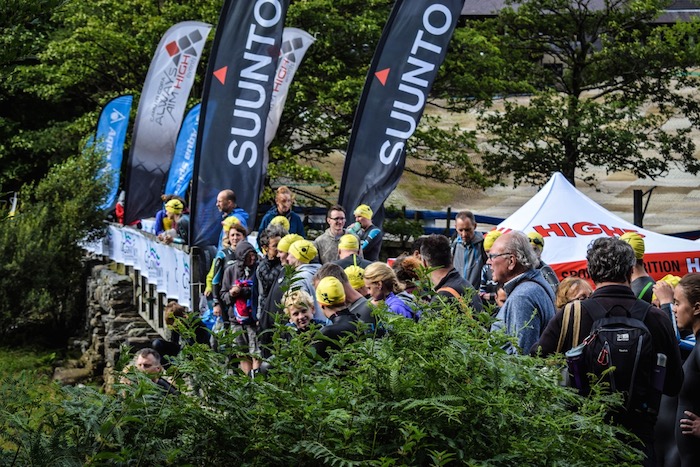 A children’s Aquathlon took place immediately after the sprint race and was open to children between the ages of eight and sixteen and made up of numerous distances of the swim and run routes, over fifty children took part with some extremely impressive swim times being posted – definitely ones to watch for the future!

Saturday evening also saw a first for the Snowman Triathlon – a dedicated open water swim race in Llyn Mymbyr, the swim was separated into two distances, one mile and half mile.

Sunday’s action involved two of the longer distance events; the Snowman Full and Legend 71.6. Kicking off at 7am, the Legend is the ‘half iron’ distance of the Snowman, with one finisher labelling it ‘as hard as a full Iron’ and another ‘the hardest triathlon race currently available in the UK’.

In the men’s Legend distance, Team Deane Tri Club’s Matt Dewhurst conquered the course first with a hugely impressive time of 06:11:29, while the women’s race was dominated by Lara Hamlett of Wigan Tri Club with a time of 06:55:03.

The full ‘classic’ version of the Snowman Triathlon was won by Mountain Fuel’s Llewellyn Holmes (03:23:36) and Dionne Allen (03:49:53) who finished nearly half an hour ahead of second place Sarah Harrison!

Also taking place on the Sunday was the culmination of the weekend-long Snowman Savage which saw a select few compete in both the Sprint on Saturday and Sunday’s Full race. The men’s Savage race was won by Sam Green of Kendal Triathlon Club, with perennial Savage winner Helen Talbot claiming yet another Adventure Triathlon Series win in the women’s race.

A spokesperson for Always Aim High, organisers of the Snowman Triathlon said: “This year saw a record number of triathletes attend the stunning and brutal Snowman Triathlon at the home of the outdoors at Plas y Brenin – race two of our Adventure Triathlon Series.”

“The Legend and Full races in particular went down incredibly well with competitors, with countless finishers labelling it as the toughest physical challenge they’ve ever encountered. And one individual calling it ‘harder than a full Iron race, and by far the hardest multi-sport event currently available in the UK.

“We’d like to thank our race sponsors for supporting this race, Plas y Brenin for being so accommodating in helping us organise the Snowman, and all the marshals, spectators and supporters who came along and made the event what it was – we can’t wait to welcome you all back in 2018.”

The SUUNTO Adventure Triathlon Series will conclude at the Sandman Triathlon which takes place on Saturday 16th and Sunday 17th September. Limited entries are still available.

For more information on next years Snowman Triathlon, as well as the rest of the Always Aim High Events 2017/2018 calendar, visit alwaysaimhighevents.com