This week Ben Wickham’s preparations for Challenge Roth included the Middle Distance ‘Deva’. Is he still on track for “Rockin’ Roth” – watch and find out!

Having introduced Ben Wickham last week, here is his second update on the road to Challenge Roth 2017…

This week was about getting set for one final race effort pre-Roth. Having qualified for the World’s at Deva Triathlon a couple of years ago, I have a soft spot for this race. Pretty, well organised and with a very decent field to race against. I was in for the Middle Distance.

To set up for a good race, Coach Yelling planned a mini taper. We have a template for the week to maintain consistency in training, but this week saw the session intensity dip, and the mileage drop.

I actually love weeks like these. I don’t end up doing less hours, but I am not on the rivet quote so much which is as much a mental break as anything. And often I can see friends during sessions without being the annoying guy who can’t hang out because he has a Heart Rate Zone to hit

Deva had at least one of my club mates running, Chris. Likely to beat me out of the water by a number of minutes, I reckoned I could probably make that back on the run if I didn’t screw up the bike, where we’d be evenly matched.

He’s in great shape for an upcoming Ironman race, so we had a race on. Deva is such a wonderful race. Great marshalls, well organised, a fast and flat bike that lets you sit and put power down, and a beautifully scenic run along the river Dee. The river bends meant our large swim wave bunched up a lot and I found myself swimming hard shoulder-to-shoulder and head-to-feet. As we turned for home (it’s up and then down river), it cleared out and I put in a good solid effort. Amazingly, I exited the water inches in front of Chris, and 9th overall. It wasn’t that long ago I was a solidly middle of the pack swimmer, so this took me by surprise.

It didn’t last long. I’m a terrible biker, and I lost a fistful of places over the next 90km, and despite my TT bike and stupid helmet, Chris was too strong for me, and rode around me. I knew he was in good run shape so I tried to limit my losses… I absolutely flew off the bike and dropped a sub 5:50 first mile, which is a tad spicy for the back end of a middle distance race. I backed it down a bit, and despite a monster stitch in the middle of the run, it was solid and uneventful. 4:27 for 16th overall and fifth in my AG. Pretty happy with that. I reckon I’m still on for my hoped for Roth pace. Just got to get there healthy now.

Next week, easy Monday, then back on the training hard!

Check back next week for the latest update and in the meantime you can keep up to date with Ben via his social media: 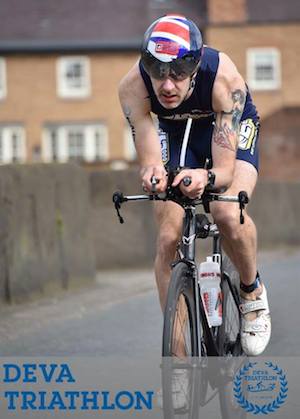