On (www.on-running.com) trainers have received a lot of hype and fanfare. Chris Hovenden decided to see what all the fuss is about, testing out the new Cloud model.

Testing the Cloud out on the road (and gym, and trail, and country…)

The Swiss company On appears to have come from nowhere to take the running and triathlon worlds by storm.

When your stable of athletes includes Javier Gomez, Tim Don, Will Clarke, and Rachel Joyce, you must be doing something right!

On’s collection of running shoes includes more race focussed kicks than the On Cloud, but with the Cloud designated as fitting the ‘active life’ category, they appear to fit On’s mantra of never not on.

One of the main appeals of the On Cloud is that, in addition to wearing them when training, they can be worn as casual trainers without giving up all sense of fashion for function… 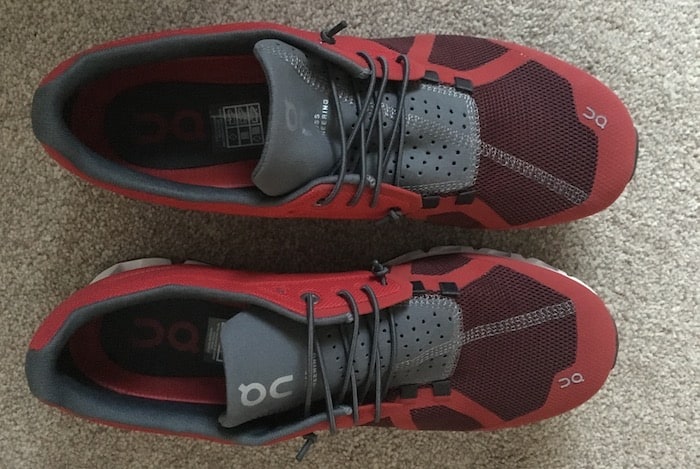 The On USP of running on ‘clouds’ is prominent in the latest Cloud trainers – the Cloud are equipped with the Swiss company’s new CloudTec® sole which is said to have re-shaped ‘cloud’ elements, an increased number of grip pads, and an updated channel which runs through the middle of the sole.

The shoes are noticeably light, tipping the scales at 235g for one size 44 shoe, and with a heel to toe drop of 6mm the On Cloud feel versatile. Comfortable in social scenarios, suitable for gym work-outs, and ‘racey’ enough for when wanting to push your park-run PB.

The versatility of the shoes is definitely a plus, but I had concerns over the long term durability of the sole (and its level of responsiveness), and the shoe generally. 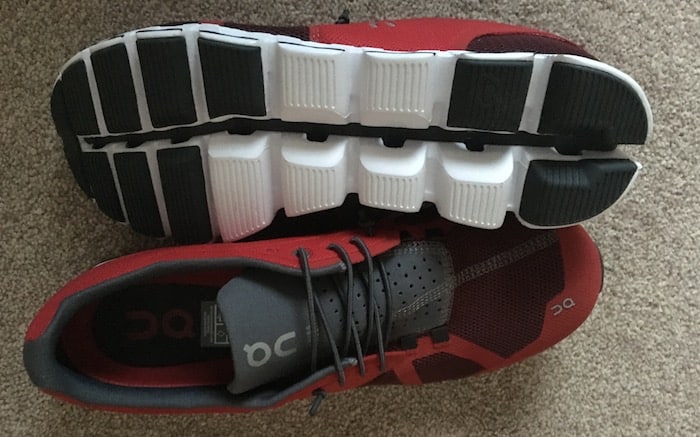 Having carried out weights sessions in the gym as well as running on the treadmill, cross-country, trails, and on the road – the sole performs impressively. Firm without being uncomfortable; and, despite frequent use over the last two to three months there was no significant depreciation in the quality of the sole and only minor wear to the decals on the mesh upper.

The only real negative is that inevitably the sole gets clogged up with mud when running along trails.

Classic triathlon focussed run shoes often come with heel loops and longer tongues to help you get your feet in as quickly as possible. Although the On Cloud have neither of these features, I didn’t find this a negative and found that the standard elastic laces (the shoes come with elastic places installed and classic laces as an alternative), made slipping into them at speed straight forward.

I have concerns regarding the longevity of the provided elastic laces (namely, how long they will continue to provide the required tight fit), but these can easily be replaced/updated.

On claims that its updates to the sock-liner, using dual density material, have improved the Cloud’s comfort. Well, it wouldn’t be a full triathlon focussed test without putting the On Cloud through their paces ‘sans’ socks. 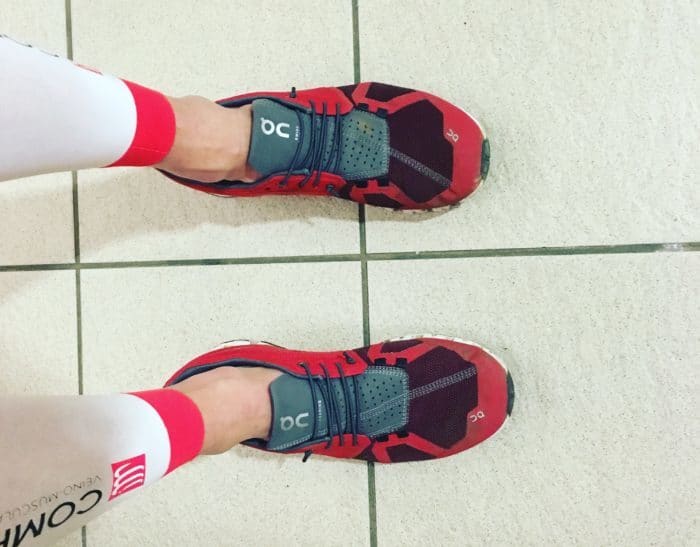 I ran without socks for between 10K and 15k on three occasions – the reasoning being that beyond Olympic distance the majority of racers opt for socks.

For someone who often suffers with blisters, the On Cloud were reassuringly comfortable. This is in no doubt in part due to the lack of internal stitching – my concerns about the stitching on the upper running down from the tongue to the big-toe were unfounded.

Like many running shoes, or trainers more generally, the ‘last’ used by On is designed for those with narrower feet. If your feet are particularly wide the On Cloud may not be the best option for you.

Having said that, the lack of a lip on the sole meant that despite having wide feet, after a brief bedding in period, I got on well with the On Cloud.

Lastly, living up to the saying that ‘every cloud has a silver lining’, the On Cloud have reflective decals for improved visibility when running at night.

If you’re looking for a multi-purpose pair of shoes, which you can also race in, the On Cloud are definitely worth a look. However, for those with wide feet, it is recommended you try before you buy.