Andy Blow has a few top-10 Ironman and 70.3 finishes and an XTERRA World Age-Group title to his name. He also has a degree in Sport and Exercise Science and was once the Team Sports Scientist for Benetton and Renault F1 teams, working with Jenson Button amongst other top drivers.

He founded Precision Hydration to help athletes solve their hydration issues and they have personalised the hydration strategies of a long list of elite triathletes, including Tim Don, Stu Hayes, Michelle Dillon, and Team Freespeed’s roster.

Over the summer he’ll be writing a series of articles on hydration for us, including advice on how to stay hydrated during short course, middle and long distance races. Of course, hydration isn’t just about water and this first piece in the series covers why sodium is one of the most important factors in a triathlete’s hydration strategy…

A 2015 study found that athletes who adequately replaced the sodium lost in their sweat finished a middle distance triathlon an average of 26 minutes faster than those who didn’t. Here’s why sodium is so important to performing at your best…

Your body contains lots of water. 50-70% of it is made up of the stuff in fact, depending on the amount of muscle and fat that you have. Around a third of that water exists outside your cells, in extracellular fluids like your blood.

The main electrolyte in this extracellular fluid is sodium and much of your body’s total, accessible sodium reserves are found here. This makes it rather ‘salty’ and the total volume of extracellular fluid in your body is directly related to the amount of sodium you have on board at a given time. So, more sodium equals more fluid; less sodium means less fluid.

(Tri)athletes are a different breed.

Most of the sodium we consume is in the form of sodium chloride, or the common table salt found in food and drinks. We take salt for granted these days as we’ve developed ways to make it widely available. But in ancient times wars were fought over access to salt and wages were even paid in it. The word ‘salary’ actually derives from the fact that Roman soldiers were often paid in salt, which gives you a pretty big clue as to its importance to life!

Because your body can’t produce or store it beyond a certain point, you need to consume sodium every day to keep your levels topped up. Sweating is the main way triathletes lose sodium and fluids during exercise. That’s basically why those of us who train regularly have different needs when it comes to replacing sodium than those who don’t.

Everyone loses a different amount of sodium in their sweat. At Precision Hydration, we see athletes who lose from as little as 200mg of sodium per litre of sweat to as much as 2000mg/l. I personally lose 1,842 mg/l and I often suffered from hydration issues in hot climates as a result. It was my personal search for a solution that led to me founding the company.

Sweat rates also vary from person to person of course; and from situation to situation for any given person (from almost nothing in cooler conditions and at low intensities, to several litres per hour during intense exercise in the heat).

When you combine differences in sodium concentration with those in sweat rates, the potential variance in the total net sodium losses experienced from one athlete to another can be really significant, especially over a middle or long distance triathlon.

And, in a lot of cases, those losses are many times higher than someone who’s not sweating on a regular basis. This is why the standard government guidelines for sodium consumption should be viewed cautiously by triathletes. It’s more than possible to lose the daily 2,300mg of sodium recommended by the existing government guidelines in just one hour of exercise, if you’re sweating heavily and you’re sweating out lots of sodium. Your loses during a middle or full distance race really can be massive.

To put this in context with a couple of real life examples; we’ve measured athletes losing just 2.5 litres of fluid and 0.6g of sodium in a five hour training session or race (very low sweat and sodium losses), with others losing up to 20g of sodium and 12 litres of fluid during a similar time period!

What happens when sodium losses mount up?

It’s impossible to nail down the exact point at which sodium (and fluid) loss through sweating becomes a problem for an individual athlete. But, it’s clear that when losses reach a certain point, the effects can be detrimental to your performance.

Your blood volume is gradually reduced as your sweat losses increase. That’s because sweat is drawn from your blood plasma. This increases the strain on your cardiovascular system, making it harder to pump blood to your skin to cool you down and to your working muscles.

Other issues such as a general feeling of fatigue and muscle cramps can also be experienced if losses are allowed to go uncorrected for long enough, or if significant imbalances between fluid and sodium are allowed to occur.

Up to a certain point, taking in plain water is enough to mitigate sweat losses. But, as those losses start to mount up, you need to replace sodium too to avoid your blood becoming diluted. This is a potentially disastrous condition called hyponatremia, which can certainly ruin your race and, tragically, has even been fatal on occasion.

How much salt should you be taking in?

Because sweat/sodium losses are so individual, any generic guidelines on the replacement of sodium and fluid should always viewed with suspicion. Having said that, figuring out whether your net losses are likely to be low, moderate, or high can be a great starting point for honing in on the level of sodium and fluid replacement that’ll work best for you in different circumstances.

Figuring out approximately what these are is a sensible place to start.

Calculating the volume of sweat you lose can be a bit awkward and hit and miss (it involves weighing yourself before and after training sessions as 1kg of weight loss is approximately equal to one litre of fluid loss), but there are plenty of online calculators that can help get you to a reasonable estimate.

Your sweat sodium concentration is largely genetically determined and doesn’t vary much at all (we’ve tested pro athletes training in frozen Michigan, then retested them years later in the humidity of Florida and seen consistent results, for example), which means that, whilst you can only find it out by getting your sweat tested, you only need to get tested once. (For full disclosure, Precision Hydration offers an exercise-free, non-invasive sweat test, as well as a free Triathlon-specific online Sweat Test that helps you get started).

Look out for our next instalment where we’ll talk you through how to stay hydrated during Sprint and Olympic distance triathlons. (Don’t worry if you race longer than that though, we’ll cover the specific hydration requirements for middle and full distance athletes in another post).

Andy Blow has a few top 10 Ironman and 70.3 finishes and an XTERRA World Age-Group title to his name. He founded Precision Hydration to help athletes solve their hydration issues. He has a degree in Sport and Exercise Science and was once the Team Sports Scientist for Benetton and Renault F1 teams. 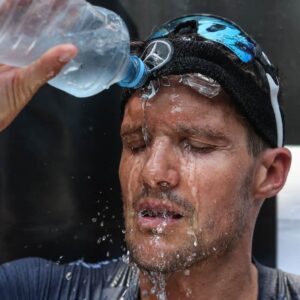 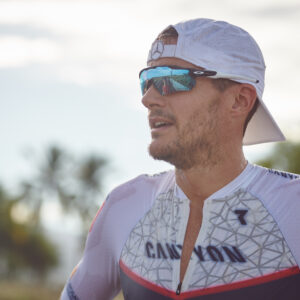 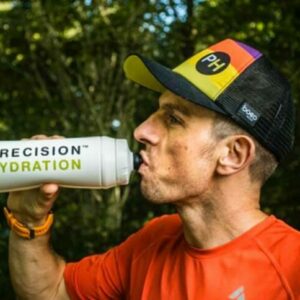 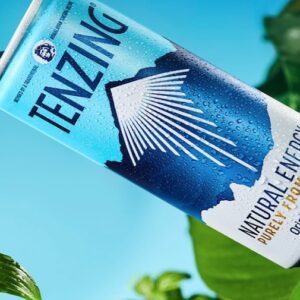 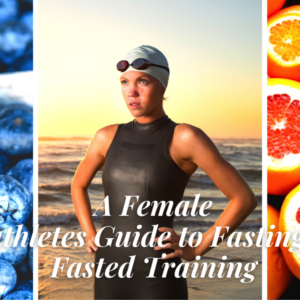