Podium chances for the Brits at IRONMAN 70.3 Mallorca this weekend?

it barely seems like a couple of years since it started, but this weekend will actually be the seventh running of the Nirvana IRONMAN 70.3 Mallorca event, in Alcudia. It has grown to be one of the largest and most popular IRONMAN 70.3 events in Europe.

For the women in particular, the event has seen several British Pro podiums since the debut of the race, most notably back-to-back wins by Emma-Kate Lidbury in 2011 and 2012.

Last years race featured torrential rain and generally “grim” conditions, but that didn’t stop Emma Pallant from battling through to take third place – alongside a host of British Age-Group podiums from athletes who dodged crashes and hypothermia.

Emma is racing again this weekend, and as you can see below, has been having fun in ‘taper week’. She also won the Mallorca Olympic Distance Triathlon last weekend. 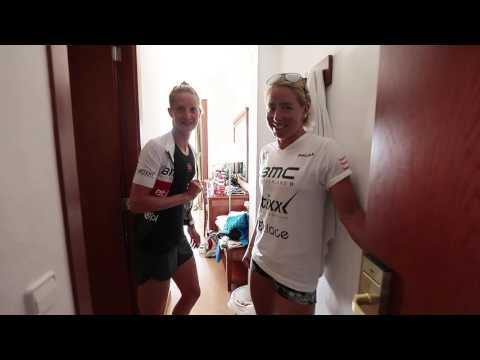 Three weeks ago Emma took the scalp of reigning IRONMAN World Champion, Daniela Ryf (SUI), at Challenge Gran Canaria. They are due to meet again, while 2016 winner Laura Philipp (GER) returns. Add in Lisa Norden (SWE), the London 2012 Olympic Silver medallist among others, and that will be a tough battle to gain any spot on the podium.

The men’s race has been completely dominated (on the bike) by Andreas Dreitz (GER) for the past three years. He returns, wears #1 and will surely try to replicate what has worked so well previously!

The top British Pro Men are David McNamee and Will Clarke. Both have had a very positive start to the year at IRONMAN South Africa and IRONMAN Texas, respectively, though Clarke hasn’t had too long to recover since his Sub-8 effort in The Woodlands.

We also have [UPDATE – Mark has confirmed that he won’t be racing – but will be at the Outlaw Half next weekend] and Outlaw Triathlon winner, Kit Walker racing. While he is listed, Alistair Brownlee will NOT be racing on Saturday!

I would have to go with an Andreas Dreitz / Daniela Ryf double for the wins. Class athletes, both have won on the course before and are more than capable of racing from the front. Pallant and McNamee are surely the best chances of a British Pro podium. Good luck all – and let’s just hope the weather behaves this year…