From European Bronze to World Championship Gold for Ricardo Batista

The top four athletes from the Men’s ETU Junior European Triathlon Championships in Weert in May this year proved their talent and consistency at World Championship level today, taking four of the top five positions between them. Only Australia’s Lorcan Redmond (Silver) could separate them.

Great Britain’s Marcus Dey lead the way through the 750m (non-wetsuit) swim in 8:59, but there were 27 athletes lined up behind over the next 30 seconds. Rather than any breaks, the strength-in-depth saw the group on the bike grow even bigger, setting the scene for the race to be decided on the run.

The train of junior men are charging! 44 men in the leading mix and battling for placement in the World Championship race.
Follow along, this race is 🔥!
LIVE on https://t.co/JwsigQEnNx #WTSGrandFinal #WTSLausanne @MyLausanne pic.twitter.com/rGARDfUSIY

The T2 dismount line resembled rush hour, with 38 Junior men arriving within just seven seconds. Marcus Dey was still in the lead group, with Toby Osman more than two and a half minutes back.

Ricardo Batista POR, Lorcan Redmond AUS and Boris Pierre are in front but this is the 🔔 bell lap and it will come down to who has the leg power to step it up a notch!
Junior men's race and the battle for the World title is on.
Follow along at https://t.co/JwsigQEnNx pic.twitter.com/XyureQBPCB

Portugal’s Ricardo Batista – third at the European Champs – stepped up to the top step of the podium by pulling away from Aussie Lorcan Redmond over the final stages of the run and (despite a very slight detour at a turnaround point), reach the blue carpet alone to secure Junior World Championship Gold with a winning margin of nine seconds.

While his T2 deficit left him well out of contention, Toby Osman ran strong (15:46) for 41st, while Marcus Dey took ‘top Brit’ honours in 24th, finishing with a 16:50 run after being right in the mix through the swim and bike. 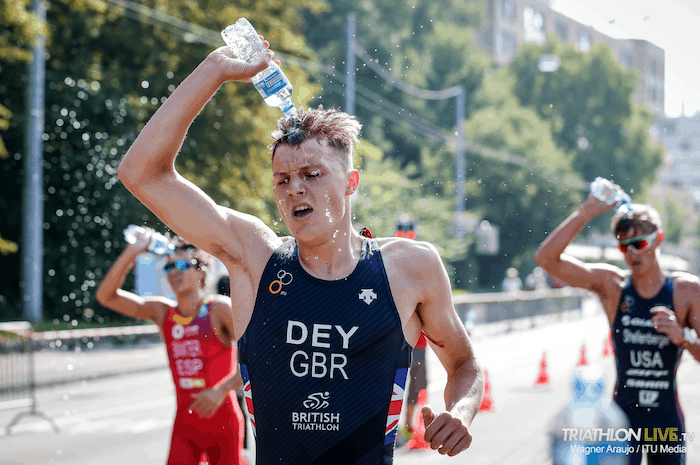