Ahead of Sunday’s IRONMAN Australia, I posed the question, “Can Marino finally claim the Continental ‘Grand Slam’ in Australia?”. The answer? Yes he can.

The ‘Grand Slam’ in this instance a reference to Marino Vanhoenacker (BEL) winning a career full-distance IRONMAN race on every continent – North America, South America, Europe, Africa, Asia and Australia/Oceania.

Despite winning ‘IRONMAN’ New Zealand in 2012 already, that years race was subject to the ‘weather bomb’, which meant that the event was delayed 24 hours and run over the 70.3 distance. A man of principle, Marino has been chasing adding the final piece of the puzzle ‘properly’. At 41 – and with a 17th full-distance win – he has now achieved that feat.

His day started with the best swim of his career. Renowned for his über cycling, the Belgian was able to exit just nine seconds behind the pace-setting Mark Bowstead (NZL), but crucially, almost a minute clear of Luke McKenzie, Paul Ambrose and Mitchell Robins.

Bowstead continued his aggressive pace on the bike, which meant that the leading duo had built a three minute lead at the halfway mark over McKenzie and Ambrose. Still together at 150km, Bowstead finally broke away from the Belgian legend over the final 30km, a bike split of 4:29:10 bringing him to T2 with a lead of 1:33. McKenzie and Ambrose were still together, but now five and a half minutes back.

It took almost 10 miles for Vanhoencker to finally close that 90 second margin over the Kiwi – but over the same period, McKenzie had closed two minutes on the Belgian. Which way was this going to go?

As the second half marathon started, Vanhoenacker held a lead of 2:19 of the now second-placed McKenzie, and was able to hold that almost constant over the next 10km, before finally able to regain a few more seconds as they passed the 35km mark. 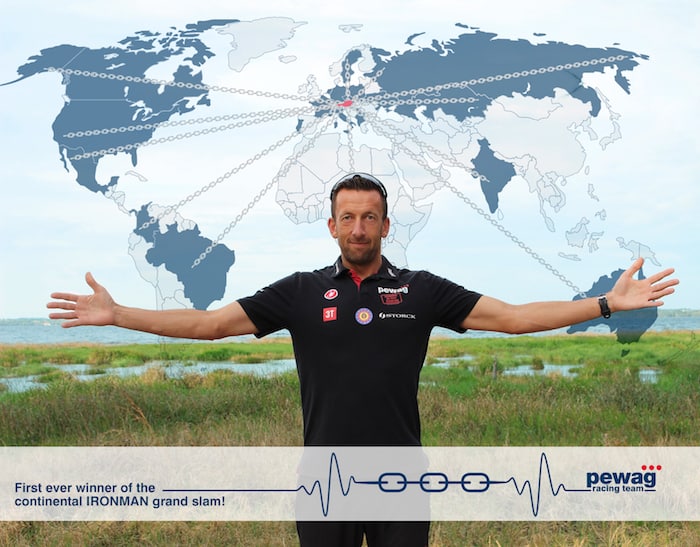