I mentioned the BallBuster Duathlon from Human Race Events in my seven highlights remaining in 2017 feature last week. An ever-present on the domestic scene for fast approaching three decades, the 8-mile / 24-mile / 8-mile challenge around Box Hill saw new winners on Saturday…

On Saturday 4 November over 500 hardy athletes had a pre-dawn start atop Box Hill to register for the famous and extremely testing BallBuster Duathlon, now in its 28th year. The gruelling event demands an 8 mile run, followed by 24 miles on the bike, with another 8 mile run to finish off, totalling 40 miles of unrelenting challenge. Each 8 mile loop includes a climb up the infamous Box Hill, so our hardcore duathletes have this to contend with a leg-wobbling five times – no wonder the BallBuster has earned its status of one of the toughest endurance races in the UK.

By 8am, with bikes racked and the famous BallBuster hoodies secured, hundreds of competitors lined up in the mist at the start line, ready (or not) for what was to come. Anyone who has been to the late autumn event before will know that the weather conditions aren’t usually favourable. In recent years, torrential downpours have added many extra layers of difficulty to the already technical course. This year though, despite drizzle and fog from early doors, conditions didn’t worsen beyond light showers. 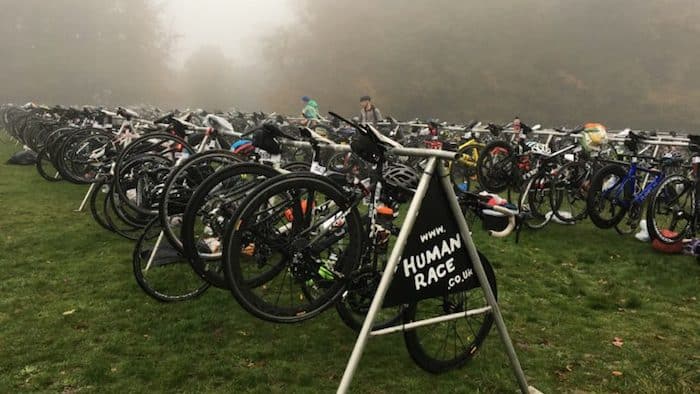 Faces old and new to the event were in the line-up: some determined to be crowned the new BallBuster champion and perhaps even beat reigning all-time course record holder Andy Greenleaf’s blisteringly quick time, and some just hoping to make it round the whole 40 miles. The horn sounded and the race began, with the frontrunner hopefuls leading the way on the first run lap.

This event certainly wasn’t a one-horse race with the first run proving a closely fought battle. Nicolas Besson had his first 8-miler wrapped up in 45:46 with Nathan Wilkins (45:59) just seconds behind. Several others reached transition well under 50 minutes, including Hugh Mackenzie, Andy Syrett and David Pompairac. With a 24 mile bike leg and yet another 8 mile run to contend with, however, the champion was still very much undecided.

So close was it at the front that, despite finishing the run in first place, Besson was in fact third out of transition and onto the bike leg. After some impressive riding from Mackenzie (1:10:56), we had a new man in first place and the two-legged final battle was on.

Nicolas Besson’s well-balanced and consistent three phases of the race saw him power through into first place, with enough time to give his proud wife and children a high-five before crossing the line in 2:47:40. Closely following Besson was Nathan Wilkins (2:49:12), who can proudly claim the fastest last lap time of 46:51, a truly fantastic pacing display with 32 miles of running and cycling already in the legs. Hugh Mackenzie’s staggering bike time wasn’t quite enough to secure him the top two spots but instead saw him earn a very commendable third place in a time of 2:50:39. 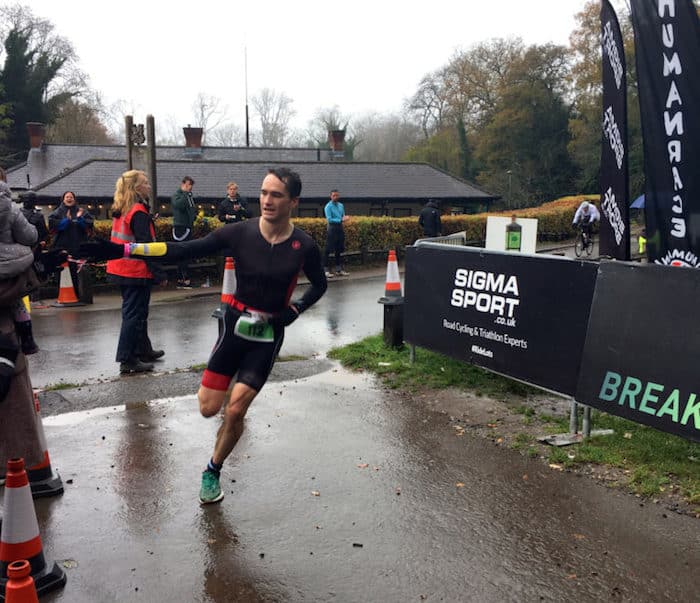 The battle for first female was a less tight one, with Tara Grosvenor storming home in 3:14:24, clear of second place by almost five minutes. Her on-point pacing was a sight to behold: both her runs (55:29 and 55:21) were within 8 seconds of each other, and she produced a negative split! Second place went to Jenny Millett in 3:19:21, who managed to just hold off an ever-closing Imogen Walsh (3:19:36), whose strong bike leg saw her very nearly pip Millett.

A special mention goes to Bethan Male who, despite finishing in fourth spot, posted the fastest female run time of the whole day – on her second run leg!

Lynda Hart, who flew around the course in 3:25:44, retained her 40-49 title from last year and earned herself a PB of over three minutes to boot. Nina White (3:39:17) and Lisa Stephenson (3:40:27) fought long and hard over second and third place, only for Nina to clinch the second spot by just one minute.

For the 50-59 male crown, it was a battle of the Davids – Freeman and Nield. While Nield’s bike leg was over five minutes quicker than his similarly-named rival, Freeman’s running strength saw him swipe first place in 3:06:02, with Nield just behind in 3:07:16. Third 50-59 male Wayne Mayer was not far behind at all, finishing in a rapid 3:08:31.

Reigning 50-59 female champion Jo Gundle did not disappoint, again dominating the field to finish in a fantastic 3:36:07. Second place went to aptly-surnamed Samantha Tophill, who topped Box Hill five times to cross the finish line in 3:52:08, 10 minutes ahead of third place Sarah Whelan, who completed the BallBuster in 4:02:59.

The 60+ men were led home by a stunning performance from Ian Leslie, who finished in 3:40:47. Ian was the only 60+ athlete to post a run time under the hour mark, smashing out his first run leg in just 59:28. A smidge over the four hour mark, Michael Hill powered his way round the course in 4:01:06, being the second and final 60+ athlete to complete this year’s edition. Sadly, no 60+ females took part this year.

As well as individual racing, we had a number of relay teams battling it out on the course. The first team home were Team Woodlings, made up of Matt Winnsmith and Jez McCann, in a supreme 2:41:53. Bringing it home for the ladies, the first all-female team to finish were Team Jo and The Sarah’s (3:08:37), consisting of – you guessed it – two Sarahs and a Jo (Bishop, Winter and Billings respectively)! Amongst the competitors was also a merry clan of 10 teams under the name ‘Sisterhood and Sisterwood’, a group who take part in events to raise money for the neonatal charity Sands, a cause very close to their hearts due to a recent personal tragedy.

The team from Science in Sport provided energy products to keep the athletes on track, and these were being snapped up by those on the course. Some riders had taken the sensible option of upgrading their bike for the day thanks to British Bike Hire, giving them the crucial edge they needed to help them hit their goals.

All the winning competitors were awarded in a well-attended prizegiving in the early afternoon, a welcome addition to this year’s BallBuster. As well as the athletes who raced and placed, Human Race congratulate all 367 individuals and teams who completed such a tough challenge – all the results can be found here.

The BallBuster Duathlon will return in November next year – pre-register for a place now by visiting the event webpage. www.humanrace.co.uk/event/ballbuster.