How to succeed at the Hever Castle Triathlon

Get ready for the 2017 Hever Castle Triathlon

Are you racing at the Hever Castle Triathlon in September? If so, prepare yourself for one of the UK’s most atmospheric, stunning and iconic events on the triathlon calendar, and take a look at our guide to the final race of the Castle Triathlon Series 2017 season.

As the finale of a succession of events, Hever stands as the world’s biggest children’s triathlon, welcoming both beginner as well as more experienced junior athletes to the childhood home of Anne Boleyn. The weekend also hosts adult races over a range of distances, and has been described as an essential destination for both British and international triathletes.

Competitors begin their race in the stunning 38-acre lake before crossing through the High Weald on an undulating cycle, finishing up with a run which circumnavigates the estate and award-winning castle grounds. The historic venue and festival atmosphere, along with the beautiful, yet challenging course, place the Hever Castle Triathlon as one of the UK’s most rewarding sporting events.

The Hever Castle Triathlon is now in its ninth year, and stands as the flagship event of the Castle Triathlon Series. Attracting around 7,000 competitors, it stands as one of the most popular triathlons in the UK, and the world’s largest children’s triathlon. As a result, many families flock to compete in the various different races available over the weekend, opening the sport to a wide range of abilities. Competitors can camp over the weekend, and take the time to enjoy the historic venue once they have successfully completed their races. 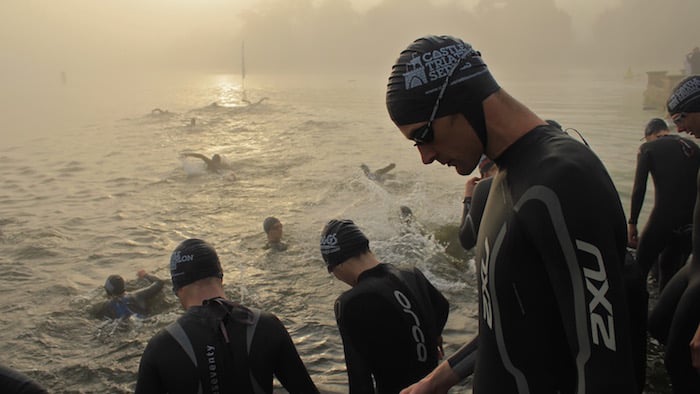 It took 800 men two years to excavate the lake at Hever Castle under the instruction of William Waldorf Astor; the 32-acres of water therefore makes for an impressive start to the triathlon, with views across to the beautiful Japanese Tea House. Competitors start from the Italian Loggia, which is spectacular in itself, although they must remember to take care on the steps which can become a little slippery.

Following a comprehensive race briefing on the Loggia, swimmers begin their race from a floating start, heading out across the water before doubling back towards transition. The Gauntlet route takes swimmers around 16 Acre Island, incorporating the main lake as well as a tributary of the River Eden, providing further opportunities for spectators to cheer on competitors from close range in a picturesque setting. 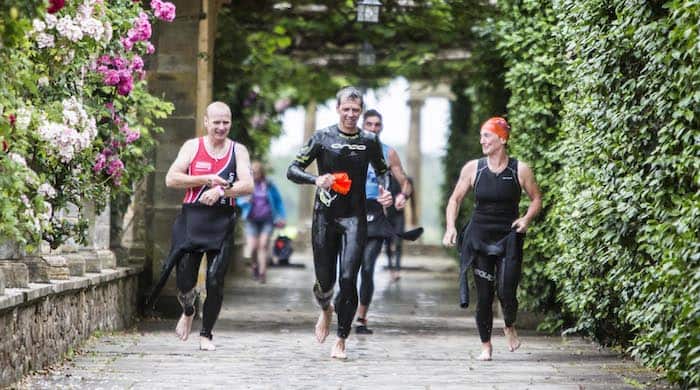 Once competitors have left transition, they head out into the stunning Kentish countryside. The undulating route takes them through the High Weald, past quaint villages and traditional Kentish oast houses, into an area of outstanding natural beauty. Due to the nature of the High Weald, there is more undulation than many might expect, meaning that the cycle is not the most straightforward of routes; it’s therefore important to conserve energy for the hills, and not set off too quickly. However, once you climb up, you are rewarded with a descent, meaning that there are plenty of opportunities to make up time. There are also a number of flat sections of the race, meaning that competitors can take the opportunity to conserve energy for the run.

Gauntlet competitors head down to the Ashdown Forest, famed for its connection with A.A. Milne’s Hundred Acre Wood. The scenery is spectacular, but again covers a number of gruelling hills, so competitors must remember to conserve energy and fuel before they head back to transition for the final stretch of the race.

Once competitors have racked their bikes, they head out from transition towards the Park Wood. The run route is largely off-road and circumnavigates the estate and award-winning castle grounds. The shorter distances lead back from the woods to the lake, where runners enjoy the views across the water, before they reach the electric atmosphere of the finish line.

The Gauntlet run route takes competitors up to the village of Chiddingstone, which is home to another beautiful castle. Competitors should conserve some energy for this stretch of the race, which climbs steeply before runners are rewarded with views of Chiddingstone Castle. Heading back towards the Hever estate, they then run along the far side of the lake and eventually up to the road, before turning towards home.

Runners sprint for the finish line down a tree-lined chute, and are greeted by a medal beneath the Castle Triathlon Series arch. The Hever Castle Triathlon provides a great opportunity for young competitors to enjoy a festival atmosphere, with crowds of spectators cheering them on towards the finish. 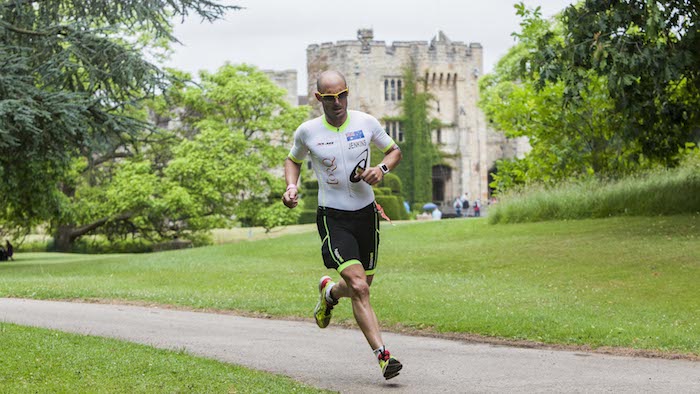 The run between the swim and T1 is a little longer than some, giving competitors time to plan their change-over in order to minimise wasted time. The surface is carpeted and kept free of debris, so there is no need to worry about slipping or discomfort. Due to the number of competitors, transition is large and potentially a little intimidating for inexperienced triathletes. Although tying flags, balloons etc. to the racking or bikes is not allowed, many competitors look for familiar landmarks, or place a brightly coloured towel with their bike to minimise time spent looking for their belongings. If you’ve trained hard to improve your swimming, cycling and running, it would be a great shame to lose precious time in transition, so it is important that competitors are organised by the time they reach that stage in the race.

Hever Castle is one of Kent’s most famous tourist attractions, bringing thousands of visitors to its gates every year. Although there will be a number of people who have not specifically come to watch the triathlon, the crossing points are well managed and it is unlikely they will cause any problems with competitors. However, it is important to be aware of castle visitors and other competitors during the race.

Once participants have finished, they can celebrate their successes in the event village and castle grounds, making the most of the festival atmosphere. A number of activities are available to children, and both competitors and spectators are encouraged to enjoy everything that Hever Castle has to offer. As well as the stunning gardens, visitors can explore a water maze, adventure playground and yew hedge maze, and can venture into the castle itself for a small charge. The weekend promises to be a great experience, offering new challenges to a full range of abilities and encouraging junior triathletes to enjoy the sport and have fun.