This weekend saw 1,500 competitors take part in the Lough Cutra Castle Triathlon, delivering personal bests, incredible personal experiences, a new course record set at the Olympic distance race and fierce competition in the new mixed team relay format from junior and adult competitors. Spectators and competitors at the privately owned estate made the atmosphere electric at the finsh line as they watched young German athlete Moritz Horn take first place on the podium in the Super Series, draft legal Cat 1 and Cat 2 Sprint race, and witness the UK’s Sam Wade break the course record in the Men’s Olympic race with an impressive time of 1:57:42 (previous record held by David Bishop with 2:00:03). In the women’s races Hana Kolarova from the Czech Republic took first place in the Olympic Race, whilst British athlete Elle Twentyman took victory in the Sprint Super Series. In the Half Iron distance race, The Gauntlet, Aichlinn O’Reilly stormed to glory after keeping up an impressive six minute lead, winning the race and a pair of Wheelscience race wheels worth €1,800 for the fastest bike split. 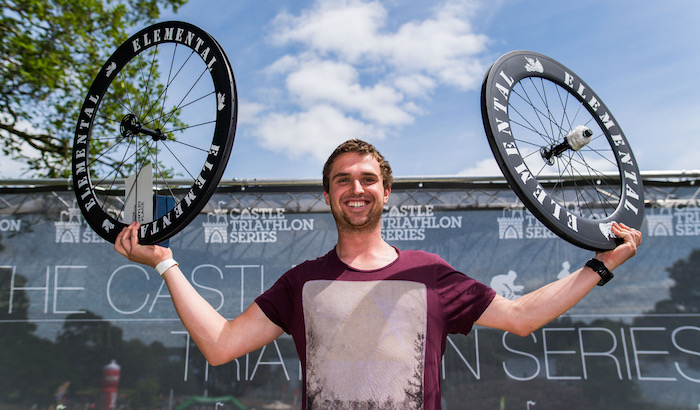 Commenting on his new course record, Sam Wade, said: “I’m surprised to break the record set! It’s been brilliant, a really great sunny day with fast conditions on the course. I’m a hige fan of the Series.”

Saturday was host to the 2017 points race for the Super Series, draft legal Cat 1 and Cat 2 Sprint race.

There was an international flavour to this event with athletes from the UK and Europe taking to the privately owned lake to start their race with a 750m swim. It wasn’t long before young German athlete Moritz Horn led the race across all three disciplines of swim, bike and run right to the finish line in a time of 59:48 with Lewis Byram in second place and Brian Glynn in third.

In the women’s race it was a young British athlete who took the glory on the day, Elle Twentyman, who came from behind in the swim to take the lead on the technical bike course, she held on to that lead to take the victory in a time of 1:07:02 just 45 seconds ahead of Ireland’s Heather Foley in second and Ailbhe Carroll in third.

As well as the Super Series a host of other sprint distances were held on Saturday for those experienced and amateur athletes, including six students from Galway-Mayo Institute of Technology (GMIT) who undertook the challenge of completing a triathlon as part of a sport and mental health initiative ‘Tri Your Mind’. The six students were in high spirits after completing their race, some of whom had never swam in open water before or run a mile before taking up the challenge just a few weeks ago. The excitement and emotion on the finish line from the athletes, their supporters and the gathered crowd was thrilling.

The event showcased the new format of the Adult Mixed Relay, a fast-paced race format which is expected to form part of the Tokyo 2020 Olympics. The teams of two men and two women in the National Club Championships worked together across a short and sharp sprint distance of 250m swim, 5km bike and 1.5k run wowed the crowd with fast and furious racing. The lead changed several times during the course of the relay event but in the end it was Belpark Triathlon Club who edged out Predator Triathlon Club to take the win and the Club Championship title. 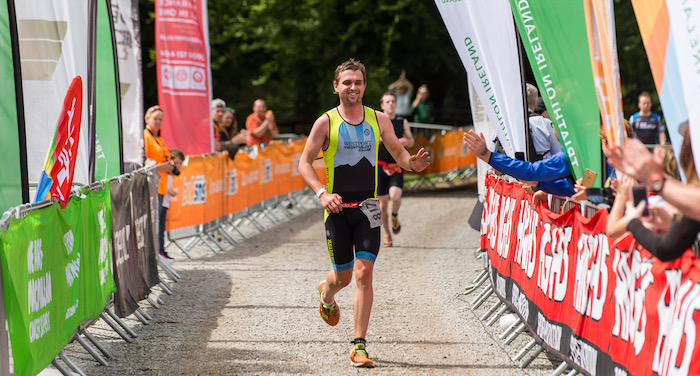 The younger athletes showed the adults just how it’s done with 3 individual races for children from 8 -15 years of age and the final feature race of the day, the Junior Mixed Relay which saw 10 teams of 4 juniors swim, bike and run their way to the finish line in a team format. The racing was fearless and ferocious from the juniors with great excitement and a result that went down to the wire between the fastest finishing teams of Predator Triathlon Club in first and Midlands Triathlon Club in second place in the team relay event. 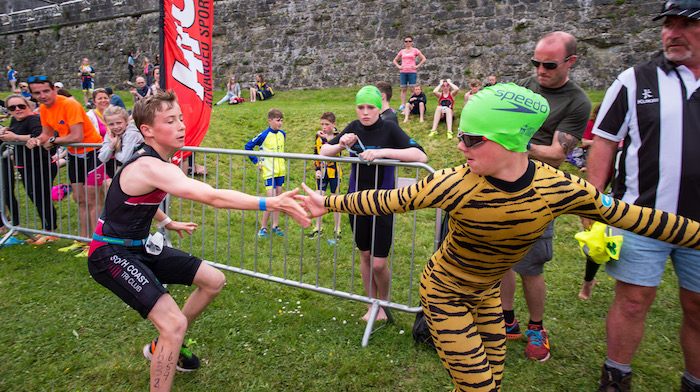 In addition to the juniors racing with a club, three of the teams in the Junior Relay were from Salthill based Scoil Ide, who had participated in the Triathlon Ireland Tri Heroes programme (co-produced by the Castle Triathlon Series) over the last few weeks, the young female athletes raced with great gusto much to the delight of their teachers and parents on the sideline, the young girls completing their very first triathlon in super style.

Race Director, Brian Adcock commented on the weekend saying, “We are delighted to see Lough Cutra Castle Triathlon extend to a two day event this year, the year on year success of the event has been fantastic. It’s great to host an early season race in Ireland, one in which athletes can test themselves at the businsess end of racing and one that can be very memorable as a first event for people completing a triathlon for the very first time. It was inspiring to see an increase in female and junior participation in this years triathlon festival and also to welcome a large race contingent from the UK who join us on their Bank Holiday Weekend. We are grateful to the triathlon community in Ireland who continue to support our event and look forward to returning to Lough Cutra Castle in 2018.”

The Lough Cutra Castle Triathlon is the first of the six Castle Triathlon Series weekend events across Ireland, France and the UK during summer 2017. Each Castle offers a high quality, competitive and safe race set in beautiful grounds and truly spectacular surroundings, with 17,000 competitors set to take part in the Series this year.

Full results of all races are available here: