Outlaw Triathlon – who are (still) the last men standing?

And then there were six. The last Outlaws standing!

Before the start of this year’s Outlaw Triathlon, there were seven men who had completed all eight editions of the long-distance race since it launched in 2010.

In wind and rain, they lined up hoping to complete the Nottingham race for the ninth time in a row – quite a feat of endurance when you think about needing to be fit year after year to complete a 2.4mile swim, 112mile bike ride and 26.2mile run. As race finishers started to come in, each of the ultra-Outlaws were ticked off as having completed, but one had decided not to start.

The six that started made it, and all seemed to like the wind enforced three-lap swim (the top end of the lake was too choppy). They all agreed that the crosswinds on the bike were testing, but one of them was actually thankful for the cold and wet run.

Here’s what they had to say about the toughest Outlaw to date:

I loved the swim route, particularly being able to dive off the pontoon, the spectators seemed to enjoy the show! The weather conditions made the bike course a test of nerve and handling skills, it really kept you in the moment!

I much preferred the three lap swim. The bike was treacherous with some crosswind gusts, but nothing anyone can do about that. I hurt on the run and probably had a face like thunder but the people at the feed stations were so enthusiastic and helped immensely. All I heard on Sunday was praise for the whole organisation of the event. 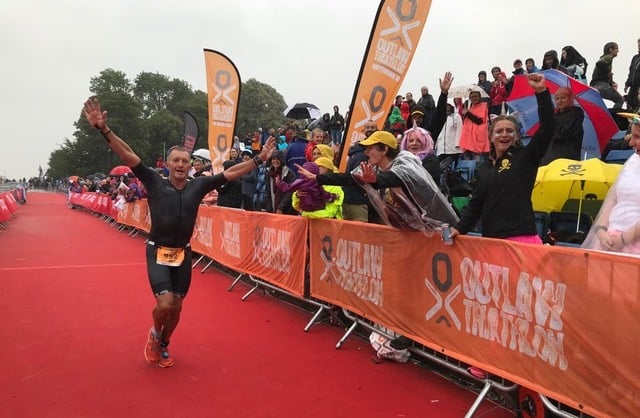 The bike took a lot out of my legs, so there wasn’t much left for the run. It was great chatting to David round the lake comparing previous years. Overall another fantastic event, see you all next year.

I thought I would dislike the three lap swim as I have always enjoyed the simplicity of one lap. I was wrong, the laps did make it more enjoyable.

I loved the run. I had stocked up on factor 50 sun cream and salt tablets and was ready for the blistering heat. I was so pleased I didn’t need them. I am so much better in cooler conditions and ran the last six miles chatting to another Nigel who had nothing but praise for the event.

I loved the three-lap swim, especially the dive on the last lap. The bike was probably mentally draining more than anything looking out for crosswinds, if you weren’t aero then you lost loads of speed into the wind, this potentially brought on GI and back issues on the run for me. Puddles on the road were full of warm water – surreal.

My mental cord snapped around 15 miles into the run, when I couldn’t push my stomach to run any more. I had some crisps and coke and half an hour later it came back. Stuttered the last two laps round the lake, but had a good with a chat with Chris comparing war stories!

I was really pleased with my race. I hadn’t done the training this year (because he broke his leg in February!) and was hoping for 13:45, which I beat by 5 minutes. As always, the race was superb, especially given the weather. The fact that we kept the distance is amazing.

Finally got round to putting all my @OutlawTriathlon medals together. 6 Half Nottingham at the top, 3 Half Holkham across the centre, all 9 full across the bottom. Not a bad collection – 18 this year will be 21 this time next year. pic.twitter.com/vchnerqUqm

Steve Braund decided not to start. Having already completed the race eight years in a row, he decided against trying to overcome the elements with a long drive to France ahead of him the following morning. He leaves his mark on the race with incredible course records of 11:06:01 in the 60-64 (2014) age group and 12:13:31 in the 65-69 (2017) category. It’s likely those records will be around for many years to come.

So, it’s on to 2019 and Outlaw X – the tenth Outlaw, which promises to be a really special occasion. If you want to be part of it too, pre registration is open now!