More than 600 hundred triathletes turned out over this weekend for the 2019 Odlo Snowman Triathlon at Plas y Brenin in Capel Curig.

The Odlo Snowman isn’t for the faint hearted, consisting of a swim in the stunning Llyn Mymbyr, a bike section on the challenging climbs in Snowdonia and a final run up Moel Siabod.

The Odlo Snowman Triathlon and Duathlon is the second part of the 2019 SUUNTO Adventure Triathlon Series as well as the Classic distance being the fourth round of the Welsh Triathlon Super Series. The calibre of athletes across the weekend was incredibly high and the racing followed suit.

Conditions for racing were ideal and the first day of the event consisted of the shorter races of the weekend with day one of the Savage Race, the Sprint Triathlon, and the Sprint Duathlon. The Saturday had the added bonus in the afternoon of the Junior Aquathlon and the Aqua Sphere Snowman Swim.

The Sprint race was dominated from start to finish by Dan Elliot who took his second Snowman Sprint title in a row in a time of 01:14:34. Andrew Scott was second in a time of 01:19:44 with Shaun Wood hot on his heels in third (01:21:57). The Women’s race was a closely fought battle that saw Catherine Connel take the honours in a time of 01:25:06 – 25 seconds ahead of Laura Gray in second. Rebecca Lodge completed the top three with a time of 01:27:17.

The Duathlon was a comprehensive win for Alan Bodden, taking the win a full three minutes ahead of Tom Worthington in second place. Matthew Whalley completed the podium. The Women’s duathlon was fought out between Helena Hughes and Lucy Killen. The win was taken by Helena in a time of 01:51:41, with Lucy 12 minutes behind.

Saturday afternoon saw the return of the Junior Triathlon. The triathlon stars of the future took part in various race distances across a variety of age categories. Rounding off Saturday’s action was the Aqua Sphere Snowman Swim. The Half mile distance swimmers were the first in the water with Sarah Roberts from Manchester Tri Club coming home first, with Gemma Moore in second and Kat Dunbar third. In the men’s Half Mile Swim, Shane Skillin took top spot with Slawomir Karczewski in second and Sean Davies in third. The Full Mile Swim saw a few of the athletes who took part in the Sprint Triathlon earlier in the day. The winner of the men’s race was Dan Elliot, adding to his Sprint Triathlon win. Second spot went to Pete Aldous with Seamus Sheard in third. The women’s was won by Jessica Trewin in a time of 21minutes and 55 seconds, closely by Karen Driver 17 seconds later with Alex Aldous in third place.

The wind picked up and conditions changed overnight presenting athletes with challenging weather to match the course – but this didn’t hinder the racing and it was as competitive as ever.

The Legend athletes were the first to go with an early start of 7am in the water. In the men’s event, the racing was fast and furious with the lead changing hands on more than one occasion. Stephen Derret lead into T1 with James Scott-Farrington right behind him. Scott- Farringdon caught Derret on the bike and was first back in T2 with a lead of a little under  two minutes. On the run up to the top of Moel Siabod, the lead changed hands again with Derret closing the gap and overtaking before the summit. Derret held on during the descent to claim the victory and a new course record in an incredible time of 05:08:37; six minutes ahead of Scott-Farrington and knocking eight minutes off the previous record. Dominic Sanderson completed the top three in a time of 05:48:39. The women’s race was dominated by Natalie Taylor (Army Triathlon Association) from the beginning – she took the win in a time of 06:16:53, six minutes ahead of Anna Lawson in second and Hannah Saitch in third. 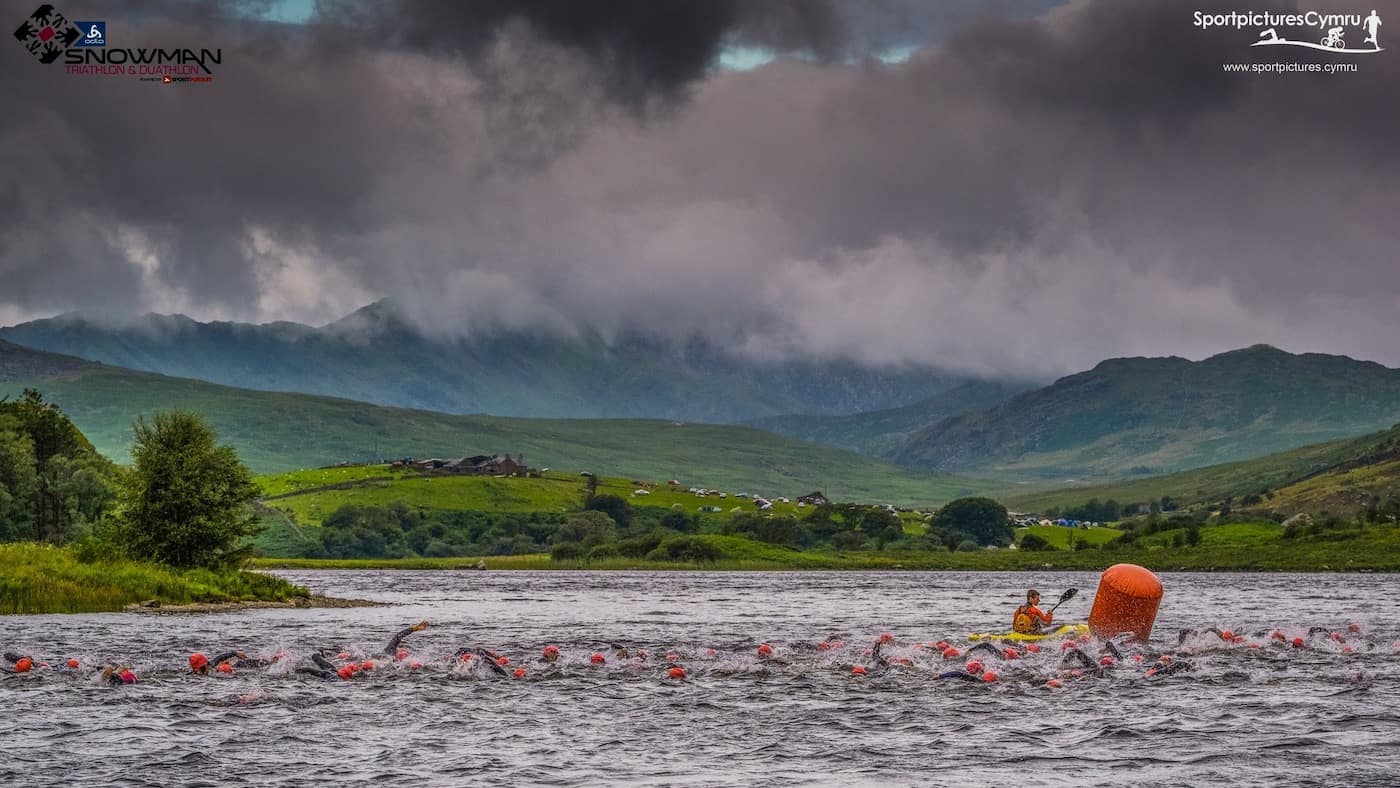 The Classic distance was also the fourth round in the Welsh Triathlon Super Series and saw a galaxy of Welsh Triathlon stars gather on the start line. Chris Silver took top spot for the men ahead of Beau Smith in second and Jack Smith-Keegin of GOG Triathlon in third. Florence Swan won the women’s race in convincing fashion, 13 minutes ahead of Rhian Roxburgh in second place. Laura Clements came in third.

The Savage Distance is a 2-day event that comprises of the Sprint on the Saturday and Classic on the Sunday. The women’s race was convincingly won by Catherine Connel in a combined time of 05:28:47, ahead of Rebecca Lodge in second place. Christine Howard completed the podium in third. Andrew Scott took top spot in the men’s Savage event in a total time of 04:50:22, well ahead of Shaun Wood in second place and Joe Howard in third.

Nigel “Kenny” Kendrick, Director of race organisers Always Aim High Events said: “The Snowman is such an amazing event that just gets better every year. We’re so proud that we can stage such an awesome event in Plas y Brenin. It’s such a beautiful place and we love coming here just as much as our athletes.

“This year has been spectacular and we’ve seen some awesome racing – especially in the Legend. The battle between Stephen and James was just brilliant and we really hope that we’ll see them again soon to continue the contest.

“We’re so pleased to see so many young triathletes of the future coming down to take part in the Junior Aquathlon as well. We really hope to see them all back again in the future to take part again.

“We’d like to extend a massive thank you to everyone of our athletes for joining us in addition to their families and friends. We’d also like to thank Plas y Brenin for being such amazing hosts, ​as well as our race sponsors for their continued support. We’d also like to thank the local community in CapelCurig and all of the local spectators that turned out to support the athletes around the course.

“Lastly, we’d like to thank our amazing marshals and volunteers, without whom we the race just wouldn’t be possible”