Fancy a trip – for two – to Las Vegas? CEP UK & Ireland are offering just that to Rock ‘n’ Roll Marathon. Full details here on how to enter.

The team at CEP UK & Ireland have launched an exciting competition for two runners to win the “trip of a lifetime” to the Rock ‘n’ Roll Marathon in Las Vegas this November.

The lucky winner will receive two entries to the Las Vegas Rock ‘n’ Roll Marathon on 12th November 2017 for them and their favourite running buddy. The prize includes return flights from the UK to Las Vegas, four night’s accommodation, two entries to the race and two full sets of CEP running kit.

And that’s not all. The CEP UK & Ireland team will also be giving away 50 pairs of their brand new CEP Nighttech Socks to the first 50 participants to enter.This exciting competition is to celebrate the upcoming launch of the CEP Nighttech Sock range, which feature eye-catching and reflective coloured dots on the back of the calf, and help promote better visibility for athletes who train in the dark. 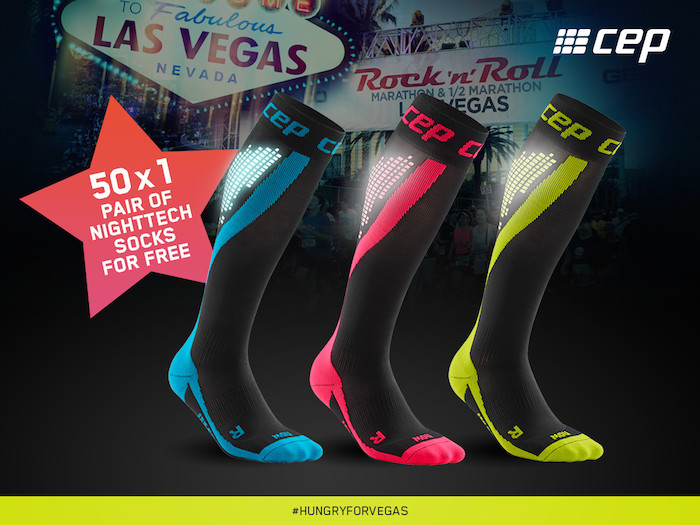 Simply visit www.cepsports.com/lasvegas and upload your ‘most fabulous running moment’. This can be of you alone, or with your favourite running group – it just needs to capture the very essence of what makes you a runner.

Entries close on 30th September 2017, and the lucky winner will be announced on 6th October 2017 via the competition page and the CEP UK & Ireland Facebook page.