From triathlon to the velodrome…

In September, Alison Patrick and Hazel Macleod were winning Paralympic Games Silver medals alongside Copacabana Beach in Rio in the PT5 (visually impaired) category. Last weekend they were racing again – but not together (!) – at the HSBC UK National Track Cycling Championships in Manchester.

The result? They will both – with their respective partners (Alison guided by Helen Scott MBE, Hazel guiding Lora Fachie MBE) – be heading off to Los Angeles at the beginning of March, selected for the Great Britain team at the Para-Cycling Track World Championships.

I spoke to Alison Patrick about her experience “on the boards”, and find out how different it was to her typical triathlon routine.

Have you done track riding before, and if not, how did the idea of doing this come about?

The whole para squad used the veledrome last year as part of winter training, but we did long efforts replicating Rio course. It came about as I had the idea of qualifying for Commonwealths, as there are not many opportunities to represent Scotland.

Most of the track events are short/fast – was that difficult given your triathlon/endurance background?

It is very different but it is helping me learn new skills like pedalling efficiently. We have only done a few sessions so I’m still learning and my triathlon training hasn’t changed… so not sure I’ll be converted to a sprinter in the next few weeks!

Well that was different: 3 bronze medals ain’t bad& we have learnt so much to help us improve thanks @Scottie2507 for your patience 🚴🚴🥉🥉🥉 pic.twitter.com/WuIM08dYLc

You have to have so much trust in your guide/pilot – was it easy to work with a new partner?

Helen (Scott) is an experienced pilot – from the moment we pushed off the railings together I felt complete confidence in her. Hazel, my guide, is also going through the processs too and I think it will help us when we come back together. [Ed. Hazel Macleod also qualified for the World Championship team as pilot to Lora Fachie].

You’ve now qualified for the World Champs in Los Angeles – which event(s) will you be doing?

I’m not sure on events yet but the Match Sprint and Kilo are the Commonwealth events.

How would you compare the sensation of cycling outside and then on a velodrome, from a VI perspective? I found my first track cycling experience pretty scary… and I can see!!!

The feeling of coming in to do a flying 200 on track is soooo much fun. It’s the fastest feeling I’ve ever had on a tandem. 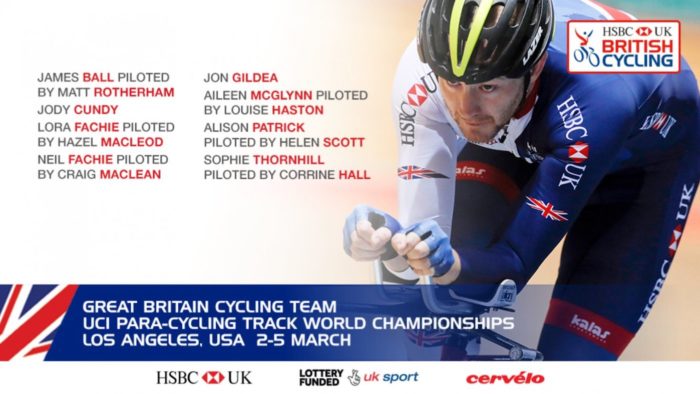