Stunning team display from the British squad in Australia

“Was that the best performance ever from the Great Britain Paratriathlon team?” That’s what I wrote LAST year after the ITU Paratriathlon World Championships in Rotterdam. After Saturday’s racing on the Gold Coast at the 2018 Championships, we can now answer that with a definitive “no” – because they were even better this time around. 10 athletes started and 10 medals earned, including three Gold. Amazing.

Will admit to having dusty eyes as I walk back from course today…never in the history of our sport have we taken a team to worlds and all have delivered medal winning performances. The challenge this year makes this day even sweeter! @BritTri 🥇🥇🥇🥈🥈🥈🥈🥈🥉🥉😁😂

Those performances of individual excellence combined to place the British squad firmly at the top of the Paratriathlon medal table, with just two years now until the second inclusion of the sport at the Paralympic Games in Tokyo.

Every member of the Great Britain Paratriathlon team won a medal at the ITU World Championships on the Gold Coast in Australia. The haul of ten medals included gold medals for Dave Ellis, Lauren Steadman and Hannah Moore.

Ellis, guided by Mark Buckingham won Britain’s first medal of the day in the visually impaired category after he overcame USA’s Aaron Scheidies with a rapid 5km run to the finishing tape. That set the tone for the next few hours, where the British team achieved what Head Coach, Jonathon Riall described as “the most collectively well executed team preparation and delivery to date.”

The number of medals won by the British team wasn’t an indication of easy victories. Today’s races featured almost all of the best athletes in the world, and in the categories that British athletes didn’t win, they made up significant ground on their rivals.

Lauren Steadman, for example not only beat the Paralympic Champion, Grace Norman in the PTS5 category, but she brought teammate, Claire Cashmore with her and relegated Norman to bronze. In the same category,In the same category, George Peasgood won his first global medal since the classifications were restructed five years ago and made the dominant favorites Stefan Daniel (CAN) and Martin Schulz (GER) work very hard to catch him after exceptional swim and bike legs.

Joe Townsend, sixth in Rio, has upped his performance in the wheelchair class massively this year. Not only did he win bronze, but he also edged closer to the huge Dutchmen, Jetze Plat and Geert Schipper. 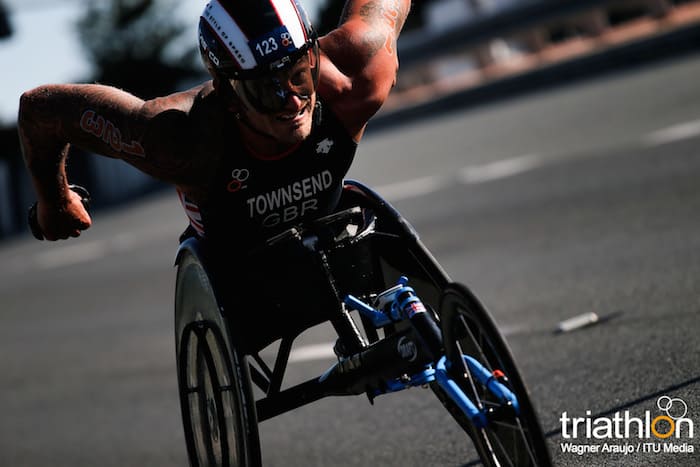 Two of Britain’s Rio medal winners, Alison Patrick and Andy Lewis both won silver. Patrick is adapting to working with new guide, Hannah Drewett in the visually impaired class, and Lewis rode the emotional rollercoaster that has seen his PTS2 class omitted from Tokyo to win another global medal. Also in silver were Fran Brown (PTS2) and Ryan Taylor (PTS3).

What an incredible day to finish off my triathlon season by being crowned World Champion!🥇I have learnt so much over the last couple of weeks out in Australia! Massive thank you to everyone for the support! #striveforbetter #TeamCES #worldchampion #paratri pic.twitter.com/JadvpXkKW9

Riall concluded: “Overall this is the most successful outcome for our team in its short history and testament to the continuous hard work from every member of coaching and support staff.”

“What an amazing feeling. It was a tough race and I wasn’t sure it would happen but I got it on the run. We made the best of the race and stuck to our game plan. The guys went out harder than us but we built through it.”

We have our first #Paratriathlon World Champions of 2018 and it is @davellisgb guided by @TriBucko taking the tape! What a race, with USA’s Aaron Schidies second Spain’s Hector Catala third! #WTSGoldCoast pic.twitter.com/kCQAaf1gmN

“They were good conditions for me and on the bike I just went as hard as I could to try and create a gap to the other girls and then just hang on during the run. It was hot out there and a tough race but I am delighted with the result. I can go celebrate now!”

“I wasn’t expecting to win but I knew I would try my best and it was enough. I kind of planned to make the bike leg my strongest but I didn’t get as far away as I wanted to but then I found my legs on the run so I was really happy. There is still more to come and I have more technique work to do but I’m really chuffed and just want to say thanks to everyone who has helped me get here.”