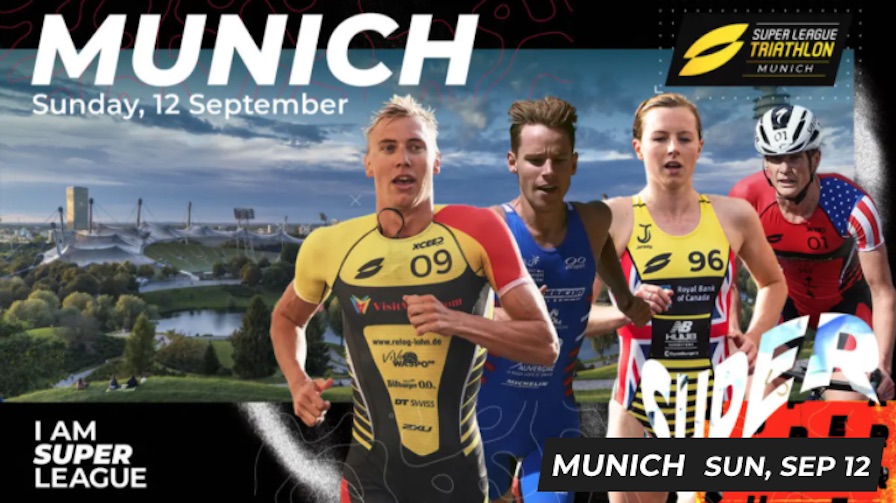 Given that the Olympic Games of Tokyo 2020 are still very fresh in our minds, it’s quite appropriate that Super League Triathlon has managed to find its second new venue of the season with an Olympic link, in the shape of Munich.

The debut Super League Triathlon Munich will be located in the Olympiapark, in the shadow of the Olympic stadium of 1972.

To add some additional home interest, home athletes Simon Henseleit and Anabel Knoll have been added as Wildcards for the event, and will be wearing the colours of the Rhinos and the Sharks respectively.

The great news is you can watch every second of Super League Triathlon Munich 2021 live right here on TRI247.com – just click on the video embed below at the above time and let the action will play out.

As you would expect, not too much change to the lineup which raced in London.

WTCS Series silver medallist, Marten Van Riel (Rhinos) and Italy’s Ilaria Zane (Scorpions) will join the fray, alongside the German wildcards, with no Gordon Benson or Alice Betto this week. That should see 21 athletes lining up for both races.

Following the Triple Mix format in London last week, the format in Germany will be The Equalizer.

You can think of the race in two parts.

First up, an individual time trial on the bike of 2.4km (2 laps), with athletes starting at 10-second intervals. The gaps created from part one will then provide the pursuit start time offsets for stage two.

That second stage will be a back-to-back triathlon (SBRSBR), with leg distances of 300m swim, 3.6km (3 laps) bike and 1.8km (2 laps) run, with the order across the line at the end of that second run determining the overall stage order. Given that first TT is relatively short, will it be enough to play a major role in deciding the destination of the podium honours?

Athletes can also be eliminated during the race – if you fall more than 90 seconds behind, you’ll get the dreaded sight of a technical official informing you that your day is over.

Athletes can earn the ‘short chute’ (the SLT short cut) to be taken on the final run, on the first swim. The first person to cross the mount line in T1, after that first swim, will get to play that joker later in the race.

Given his bike and swim strength, that would appear to play to the strengths of Vincent Luis for example. A strong opening TT will likely put him in prime position to use that swim strength, and have that ace to play on the final run leg, in the same manner that Hayden Wilde did in London. That would make him tough to beat.

The same logic would seemingly apply to Great Britain’s Jessica Learmonth – can she make it two back-to-back SLT wins? We will find out on Sunday.