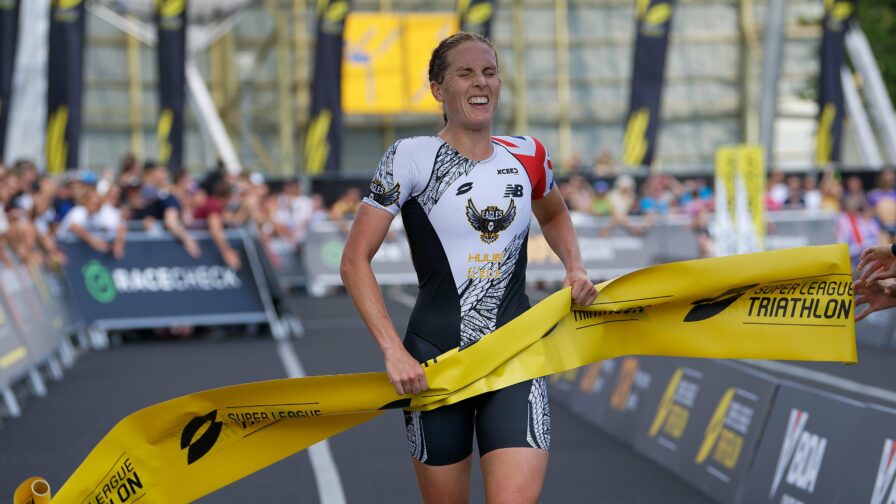 A different week and a different format, but some things stayed the same in the world of the Super League Triathlon Championship Series in Munich on Sunday.

Jessica Learmonth won again, and she was even more dominant that she had been in London last weekend. She produced one of the most dominant performances in SLT history to head another all-British women’s podium at the Olympiapark, home of the 1972 Olympic Games.

There were two more British athletes on the men’s podium – but they were both looking up to the top step, and the familiar sight of Frenchman Vincent Luis. Back where he belongs.

Sunday’s format started with a two-lap (2.4km) individual bike TT, time differences used to determine the pursuit-start times for the main course after that starter, a back-to-back swim-bike-run; a ‘mini-enduro’ if you like.

In truth, the TT didn’t massively split up the field, as reflected by the somewhat chaotic swim start which followed:

Emilie Morier (FRA) was the narrow leader after the TT, but superswimmer Learmonth was still first out of swim #1. That was one of the key elements of the event, as it was the only place to earn the ‘short chute’ – the SLT shortcut to be used on the final run. With no other opportunities to gain that advantage, would it be game over and a second straight victory for the Mixed Relay gold medallist from Tokyo 2020? Quite probably.

Learmonth, in typical style, wasn’t waiting around and built a lead of 15 seconds on the bike, held that pretty consistent through the run and then headed back into her strongest discipline where she was certainly not going to lose any time.

With a short bike and run to follow – with the joker of that short chute still to take too – who would finish second was frankly the key question remaining. Learmonth was all but guaranteed to extend her unbeaten run in SLT racing (Arena Games Rotterdam 2020, SLT London last week and now Munich).

Jess was in a league of her own – 27 seconds clear with just one bike lap and the final run remaining, an absolute demonstration of super-sprint racing, and certainly one of the most impressive in the history of SLT racing.

The chase group was quality – if a long way back – with Coldwell, Taylor-Brown, Potter, Zaferes, Spivey, Holland, Stanford, Klamer and more all with 1.8km of running to fight for the Munich podium. It was an all-British podium last week in London, same again in Germany?

No concerns for Learmonth who took the win in style, while behind it was Georgia-Taylor Brown and Beth Potter completing the podium, overtaking the U.S duo of Spivey and Zaferes on the final run.

Learmonth took that short chute – but frankly, she didn’t even need it. Seriously impressive.

Seth Rider (USA) was the narrow TT leader with Vincent Luis more than 10 seconds back in only 15th position. No problem for the most successful athlete in Super League Triathlon history – just swim through the entire field and earn that short chute! Job done, the only question remaining was whether that effort would impact his race. If not, who was going to finish second?

Unlike the women’s race where Learmonth was away and gone, the first swim-bike-run saw the prime of the SLT Men racing hard and racing together, with little to separate them as the flew down the grass bank into the second swim. A bit of an ‘ouch’ moment for last week’s winner Hayden Wilde.

That second swim impacted the race, and heading onto the second bike leg there was a break from Vincent Luis and Jonathan Brownlee. The chasers were now Wilde, Vilaca, Van Riel, Yee and Nener. With that short chute up his sleeve, Brownlee would require something remarkable to break Luis and overcome that advantage.

A few seconds behind, it was no surprise to the see the young Olympic medallists Yee and Wilde, setting off in chase over the 1.8km run.

Brownlee tried, but he was not able to break the Frenchman, but it was still another step up from third place last week. As Luis said post race, “Jonny is really back on his A-game.”