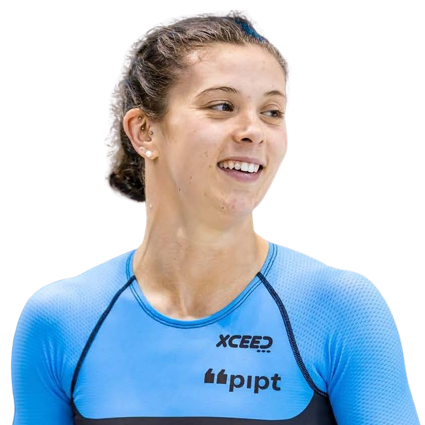 Sophie Coldwell’s gradual improvement and terrific performances have marked her down as one of the world’s finest short-course triathletes.

The Loughborough-based athlete is a consistent performer, who secured top-10 finishes in all her races last year. and has a total of eight professional wins under her belt.

Although just a reserve at the Tokyo Olympics in the summer of 2021, Coldwell struck gold in the Mixed Relay at the 2022 Commonwealth Games alongside Georgia Taylor-Brown, Alex Yee and Sam Dickinson.

That victory in Birmingham was all the sweeter as she’d just missed out on a medal when finishing fourth in the individual race two days before.

Coldwell is originally from Gravesend, Kent but grew up in Keyworth, Nottingham, where she joined Charnwood Athletics Club and Nottingham Leander Swimming Club. Coldwell still runs for Charnwood and recorded the fastest time for her leg of the Midlands six-stage road relays in March 2022.

Having graduated from Loughborough University in 2017 with a biology degree, she remained in the town to focus on triathlon under coach Adam Elliott.

Coldwell first got into triathlon as an eight-year-old when her mum entered her into a local event in Clifton, Nottingham. She went on to win junior and under 23 medals at international level before making a successful transition to the senior ranks.

Coldwell has spent much of this year seeking to hone her bike skills by competing in cycling for Loughborough Lightning. Now firmly established in the top 10 of the World Triathlon Rankings, she looks ready to challenge for global honours.

Sophie Coldwell has been competing internationally at triathlon since 2012, and was racing at senior level by 2015. She first made her mark in the senior ranks in 2017, beginning that year with victory in the ETU Triathlon European Cup at Quarteira, Portugal, edging out GB team-mate Georgia Taylor-Brown.

Coldwell showed this was no flash in the pan by finishing fourth in an ITU World Triathlon race at Yokohama before coming second, behind fellow Brit Jess Learmonth, in the ETU European Championships at Kitzbühel, Austria.

Coldwell won the ITU World Cup event at Tiszaujvaros, Hungary, clocking the fastest run split (17:04) to cross the line in 59:02. She backed this up with victory in the ETU European Championships at Tartu, Estonia (58:32) a week later.

Coldwell next topped the podium in 2019 with victory in the ITU World Cup at Cagliari, Italy (57:57), having finished fourth in Madrid two weeks previously. Her best two placings for the remainder of the year came in relay events. Coldwell was part of British team who won the World Triathlon Mixed Relay Series event in Nottingham and also finished second in Edmonton.

Coldwell was also sixth in the WTCS race at Yokohama (1:55:28) and seventh at Montreal (23:56), a position she matched in the World Triathlon Championship Finals at Edmonton (1:56:46).