How do you build a bike for off-road triathlon?

Take a look at what Doug Hall did…

When I posted our last Pro Bike feature on Twitter (the Giant Trinity Advanced Pro 1 of Kimberley Morrison), Great Britain Elite Off-Road athlete, Doug Hall asked “fancy doing an MTB one for the off road fans?” Great idea I thought – and threw the job right back at Doug!

And here were are, with a detailed look at Doug’s Charge Cooker Titanium 29er.

Away from the Elite circuit for a couple of years, Doug will be back this coming Sunday at XTERRA Malta, the first event of the 2017 XTERRA European Tour.

Aside from something a little different to many of the TT bikes we have previously showcased, Doug’s choice of frame and components is all driven by personal choice, preferences (and budget…), in the absence of current sponsorship commitments.

Given that, how do you build an off-road triathlon bike, and what would you choose? Well, this is what Doug Hall did…

After a few years away from the XTERRA circuit, I’m back on the European Tour for 2017.

Challenging myself to race at a high level whilst holding down full-time employment can be a struggle, but the upside of this (other than resting 9-5), is that I can be picky about my bike tech and just purchase product without having to scrounge about for sponsorship deals like the old days!

Charge Cooker Titanium, 29er obviously. I spent a while searching for one of these. I’m quite particular about bike set up, I like a long reach but a short headtube and the Charge is spot on in the medium size. Whilst I love carbon bikes there is something about a Ti frame. It is super lightweight but offers a bit more flex resulting in a smoother ride and better traction on rough surfaces. 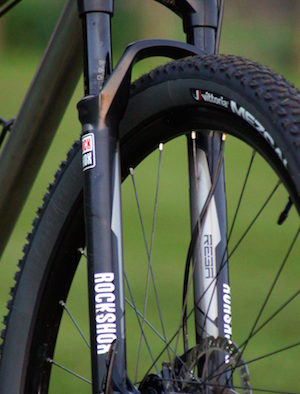 Rockshox Reba RL, a pretty basic unit but nice and light. It did come standard with a 100mm travel, but that meant the stack height being just that little bit too high. A quick hacksaw and thread tapping job reduced the travel to 95mm, voided the warranty but placated my fussiness.

Shimano XT/XTR. I’ve been a late convert to 11speed on the mountain bike, but after testing it, I simply had to buy it. Crisp precise shifting across a frankly massive 11-42 range cassette, paired with a single 34t ring up front, renders the front derailleur obsolete and cast to the spares bin. Stopping duties are covered by Shimano XT brakes. I’ve found them to be as good as XTR but without the price tag and the constant worry of breaking a £40 carbon lever on a tree!

Stans No Tube Grails. The grails are really meant to be used for cyclocross and gravel duties. Initially I slapped them on the mtb due to a spoke failure on the regular wheels but I found them to be great. Lightweight, wide internal width (bulks out the tyre) and I’m especially fond of these wheels as I hand built them myself onto dependable Hope Pro4 hubs.

Vitorria Mezcal Graphene. Go to any mountain bike event and the pre-race discussion is all about tyre choice. I’m no different, I’m heading out to XTERRA Malta at the end of the month and the dry, rocky conditions require a particular tyre. A quick call to Jon Heasman at Vittoria and I had a new pair of boots for the bike, perfect for going fast and standing up to the abuse they’re likely to receive on the limestone trails. ThEese tyres are the first mountain bike tyre to have the super material graphene in them.

Easton carbon bar with Shimano pro Atherton grips, Fizik Gobi sadde atop a Shimano pro post, shimano pedals – I’ve had these for years and they are showing their age, but they just work!” 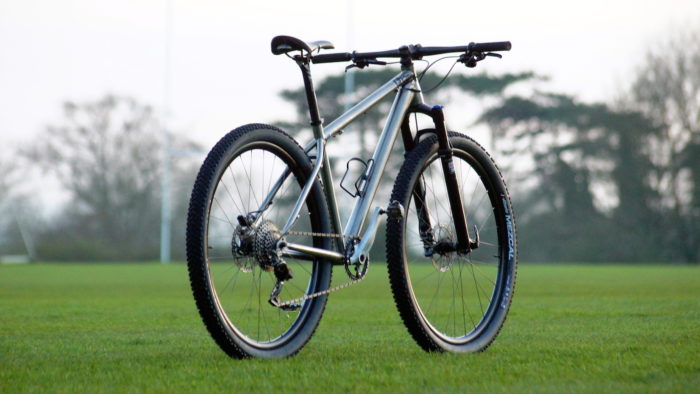