The ‘Beast from the East’… wins IRONMAN New Zealand**

Congratulations to the legend that is Ken Glah!

If you are relatively new to the sport (as in, ‘only’ been around 15 years or so…!), then the name Ken Glah may not be one you are familiar with. Thankfully, old people like me can help fill you in on some history…

One of the ‘original’ IRONMAN Pro’s back in the day, Ken won multiple IRONMAN races (Brazil three times, New Zealand twice, Canada), and was involved in what was surely the closest finish in IRONMAN history in 1990 – ironically, also at IRONMAN New Zealand, just losing out that day to Finland’s Pauli Kiuri: 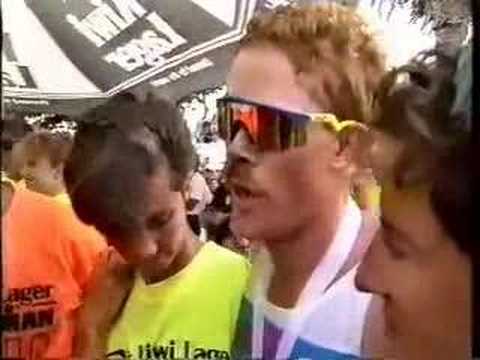 Ken is still heavily involved in the sport, travelling the world and running his Endurance Sports Travel business (www.endurancesportstravel.com), and I got to know Ken in Kona last year as a client of his – and he cooks awesome breakfast pancakes!

The result? He has now qualified to race his 35th consecutive IRONMAN World Championship in Hawaii.

If you are going to Kona and want an all-inclusive package from somebody that knows that place and race better than anyone, Ken is the man you need to speak too. Congratulations on keeping that incredible streak going.