Jodie Stimpson is the sole British representative on Saturday at ITU World Triathlon Gold Coast, the second event of the 2017 series. Don’t miss the action

Jodie Stimpson is the sole British competitor at the ITU World Triathlon Gold Coast this weekend. She started the Series with silver in Abu Dhabi last month, and will hope to find a turn of speed on the sprint distance course at the Commonwealth Games 2018 venue this weekend.

Stimpson came close to winning in Abu Dhabi. A super-human sprint from Andrea Hewitt (NZL) denied Stimpson from the perfect start to the season, but she was happy with silver and validation that her winter training at her new base in Loughborough are working for her.

The Commonwealth Champion is looking forward to racing at Broadwater Parklands in Southport, the site of the 2018 Games exactly one year from now.

She said: “Things started well for me in Abu Dhabi and I’m hoping to continue that form over the sprint distance this weekend but I’ll take each race as it comes and the aim here is just to score some more World Series points and execute my race strategy as well as possible as I continue to build up to peak condition.” 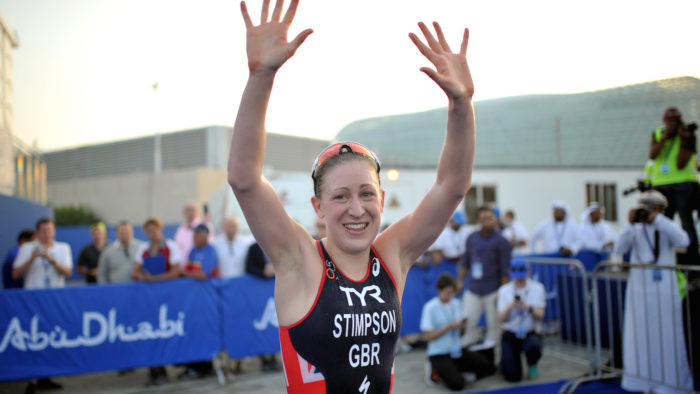 Hewitt will start the race as the top ranked athlete having won the previous round, and Katie Zaferes will be one to watch having won the New Plymouth ITU World Cup event last weekend.

There are no British men taking part on the Gold Coast. A larger field, including Jonathan Brownlee, is expected to race at the next round of the Series in Yokohama.