Lausanne 2019 concluded with Silver medals for the British team on Mathias, Dijkstra, Waugh and Yee in the Junior and U23 Mixed Relay World Champs

As you’ll likely recall, the Elite/Senior Mixed Relay World Championship has been held annually in Hamburg for several years now, with this combined Junior and U23 event a relatively recent addition to the Grand Final schedule.

Full credit to the federations and the athletes involved – the racing was high quality, hugely competitive and featured some very strong teams from many federations. This event has the potential to be (another…) ‘one race too far’ in our sport’s fascination / obsession (?) with ‘championships’, but full respect, this provided great viewing and intense competition.

I think we will look back on the Lausanne Grand Final as one of the best – and this was a great way to finish three packed days of high quality racing.

The report below is courtesy of the ITU.

Team New Zealand brought home the gold after suffering the heartache of disqualification last year, conquering the Junior and U23 Mixed Relay World Championships with a magnificent leg by Hayden Wilde sealing another magnificent team performance. Hannah Knighton brought the Kiwis back up to contention with an excellent bike before Tayler Reid’s swim built on her good work. Ainsley Thorpe kept the team’s momentum brilliantly, before Wilde pulled away on the bike to put enough daylight between himself and Alex Yee to ensure the gold went to team New Zealand.

“I had one of my best swims and I had to hammer it to get on the back of that group,” said Wilde. “I knew Alex would be there, I rode with him all day yesterday, he was super strong on the hills. On the corner I absolutely hooked it and knew it would come down to just absolutely running hard. I am so stoked.” 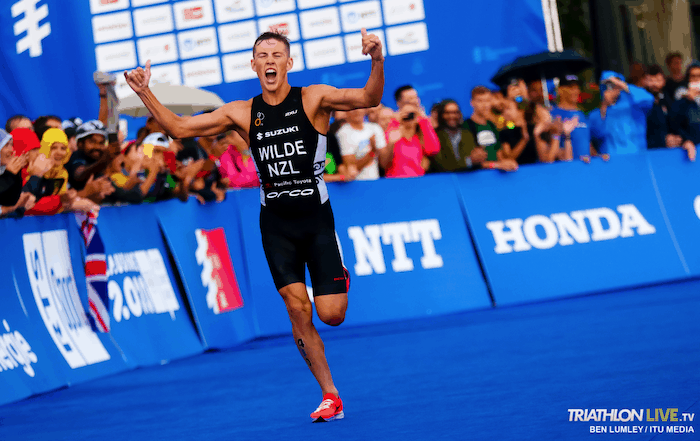 In one of the most crowded start lists ever to be seen in a Mixed Relay event, 23 teams lined up in Lausanne in the search of the gold, all comprised of a heady mix of talent from across the previous two days’ Junior, U23 and, in the case of the likes of Wilde, Taylor Knibb (USA) and Nina Eim (GER) to name but three, Saturday’s Elite racing.

Emilie Morier, crowned U23 female World Champion on Friday, showed that France – Elite World Champions two years in a row – was still ready to give it all to demonstrate their mastery of the format. She managed to get out of the water along with Sweden’s Emma Varga, followed closely by Olivia Mathias (GBR). Tamara Gorman (USA) caught them all on the bike, only to drop back again on the run, Nina Eim hauling Germany right back into contention. 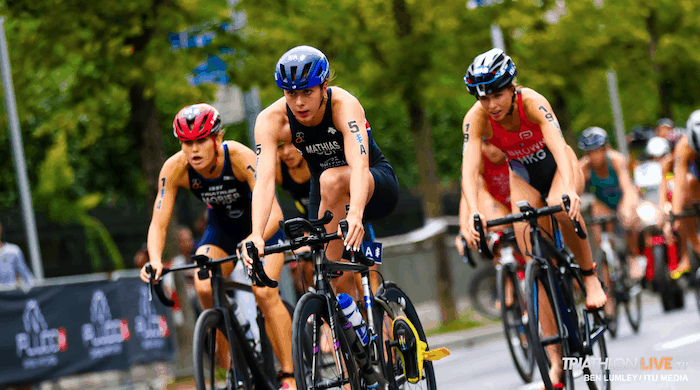 The second leg saw the likes of Ben Dijkstra (GBR), Boris Pierre (FRA) and Tyler Reid (NZL) heading down the chute and flying into the 300m swim. Reid quickly made up ground on the leaders, cutting a vital 7 seconds out of the lead, only for Portugal’s Vasco Vilaca to drop the hammer on the bike, initially dragging Pierre and Reid with him, before they, too, were left chasing dust. At the same time, Koki Yamamoto brought Japan into contention, but while Vilaca had 15 seconds over the field off the bike, Ben Dijkstra laid down another incredible run leg to put Team GB into pole as he handed over to Kate Waugh. 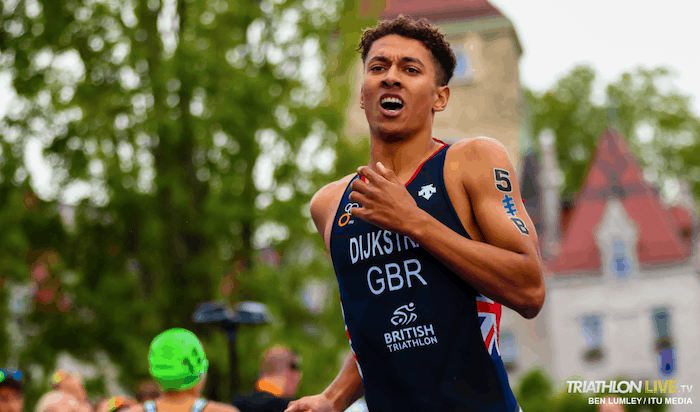 Waugh was looking comfortable as she exited the swim with the lead still intact and out onto the bike course, only for Taylor Knibb to lead the group chasing her down and onto her back wheel. A tough transition for her and Joanne Miller left the USA and Australia with work to do to catch the leaders, meanwhile Lena Meissner was biting the bullet and hauling herself right back into contention, kicking hard over the final stages of the run to give Germany the lead into Lasse Luhrs’ last leg. 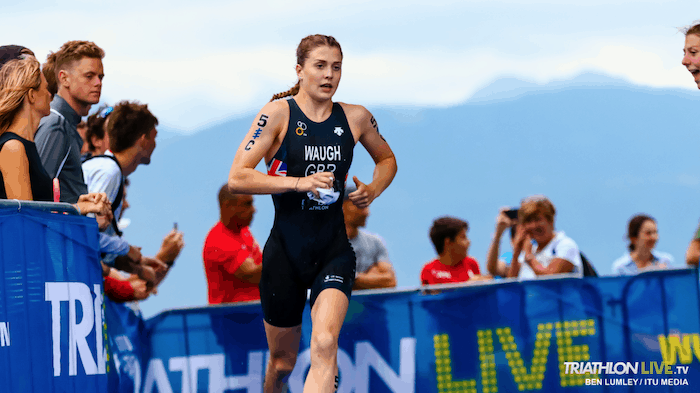 Ainsley Thorpe was also going well to keep New Zealand right in the hunt, so that by the time the men emerged from the water and onto the bikes for the last time, it was New Zealand, Great Britain, Germany, USA and France all on each others’ wheels as the rain started to pour down on the course. The strongest of the bunch on two wheels, the change in conditions played into Wilde’s hands, and after he had dictated the pace for the first few kilometres, he chose his moment to pull away, knowing that Yee’s run was the most dangerous of the four.

A difficult transition for the Brit then played into the Kiwi’s hands even more, and it was Wilde who was able to enjoy the final chute and take the cheers and the rest of the team all the way to a brilliant win. Yee crossed seven seconds back having taken five out of the gap, USA’s Seth Rider bringing home the bronze.

“Everyone was just sending it and so stoked we got Hayden a bit of a birthday present and so proud of this team,” added Tayler Reid. “After last year, that’s redemption for us this year. We didn’t quite get what we wanted in our individual races so we are super stoked to come away with the win today, the team was just epic.”

“It’s been really good her and to be able to race with all these guys just made that extra bit special,” said Olivia Mathias afterwards. For the second anchorman, Ben Dijkstra it was just a matter of “try and give it my best and see what happens. I mean it was hurting on the run but with a team like this it gives you that added motivation to push that little bit deeper and push towards the end. 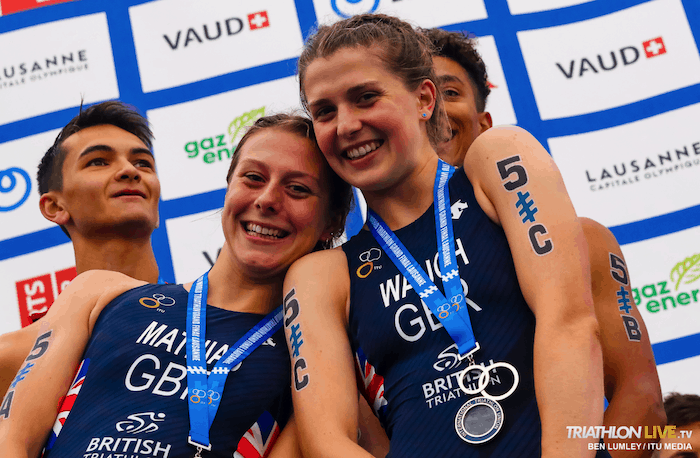 “Overall a super fun day,” said Tamara Gorman. “We had some emotions throughout it but we came out with the podium which was exciting in the end.”

“It was awesome working with these guys. It was my first time doing a relay with them and they crushed it and I was really happy to be on the team with them,” added Knibb. 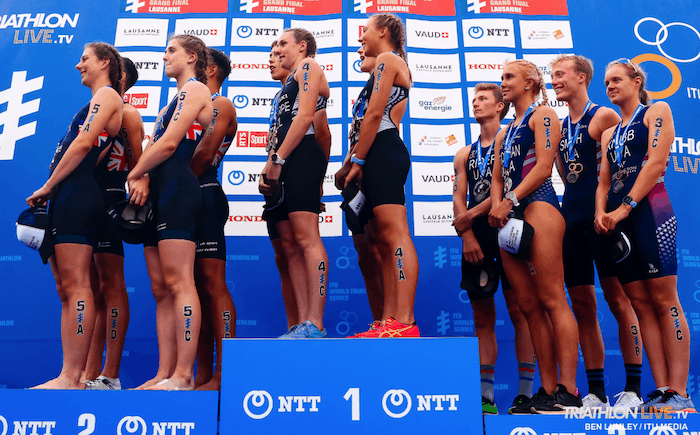