The American has announced herself on the world stage as a potential star of the future.
Height
5'7"
170cm
Birthplace
US
Washington DC
Age / Birthday
24
14 Feb 1998
Follow 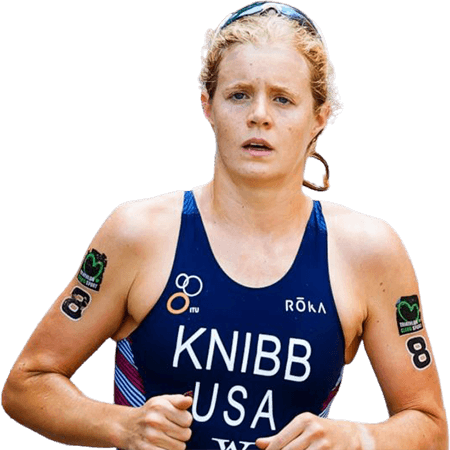 At just 23 years of age, Taylor Knibb made US Olympic history when she became the youngest woman ever to qualify for its triathlon team ahead of Tokyo 2020.

The Washington D.C. native had been picked by the selectors after a stunning win at the World Triathlon Championship Series (WTCS) 2021 season opener in Yokohama, Japan. She would then leave her maiden Olympics with a silver medal from the Mixed Relay.

Based in Boulder, Colorado, Taylor is part of the Origin Performance Squad, which includes US national team members Eli Hemming and Matt McElroy, and she is coached by Ian O’Brien and Erin Carson. Taylor moved to the Mountain West after studying psychology at Ivy League school Cornell – graduating in 2020. Whilst at Cornell, Taylor, who had raced in cross country events since her second year at Sidwell Friends School, represented the university’s cross country team as well as its track and field, diving and swimming teams.

Despite participating in so many different sports at university, Taylor has credited her Cornell coaches Artie Smith and Mike Henderson for allowing her to prioritise triathlon training during her time in New York. Taylor believes Smith’s training schedule, which involved no tempo or long runs, improved her performance so much that she entered the triathlon national championships as a junior.

Known for her bike strength, Taylor produced a cycling masterclass in August 2021 during the World Triathlon Championships Finals in Edmonton where she finished first, beating Tokyo 2020 gold medallist Flora Duffy and fellow USA athlete Katie Zaferes. She rode more than two-and-a-half minutes quicker than the entire field – seeing off Duffy who had tried to bridge back.

At the inaugural Collins Cup in August 2021, Taylor won her race for Team USA when she destroyed modern-day great Daniela Ryf – finishing more than 16 minutes clear of the Swiss triathlete and 23 minutes clear of third-placed Teresa Adam. It was a stunning individual performance from Taylor as she repaid the faith shown in her by team captains Karen Smyers and Mark Allen.

Just seven days after winning Olympic silver in Tokyo, Taylor had also finished second to Emma Pallant-Browne on her IRONMAN 70.3 debut in the familiar surroundings of Boulder. She had led out of the water and then on the bike, but eventually succumbed to Pallant-Browne on the run – finishing with a time of 4:02:20. It was that Boulder effort which earned her a wild card selection for The Collins Cup.

Taylor then followed this up with a highly creditable bronze behind Lucy Charles-Barclay at the IRONMAN 70.3 World Championship in St George, Utah in September 2021.

Taylor Knibb at the Olympics

In her first event at the Tokyo Olympics, Taylor finished a very respectable 16th in the women’s Individual race, but was well behind the brilliant gold medallist Flora Duffy.

Just a few days later though there was much better to come as Knibb raced in leg three for Team USA in the first ever Olympic Games Mixed Team Relay event. She succeeded team-mate Kevin McDowell, who had finished second in leg two behind Great Britain’s Jonny Brownlee. Taylor then pursued Team GB’s Georgia Taylor-Brown in first and saw off challenges from France’s Cassandre Beaugrand in third place whilst on the bike. Taylor finished the leg in second, 21 seconds behind Taylor-Brown, before handing over to Morgan Pearson for the final leg.

Taylor was inspired to become a triathlete after watching her mother Leslie compete in an IRONMAN race, before racing in her own first ever triathlon in Columbia, Maryland at 11 years old. Taylor’s other role models include 2013 junior world champion Tamara Gorman and Rio 2016 gold medallist Gwen Jorgensen, who sent Taylor a pair of sunglasses after her first world junior championships win in 2016.

An experienced triathlete, Leslie Knibb finished fourth in the 2019 ITU World Triathlon Grand Final (55-59 female) in Lausanne with a time of 2:40:28. Like Taylor, Leslie studied at Cornell, as did Taylor’s maternal grandparents Joseph and Vera, two cousins Caroline and Peter Simon and three uncles, Ernie, Joseph and Wally Simon. 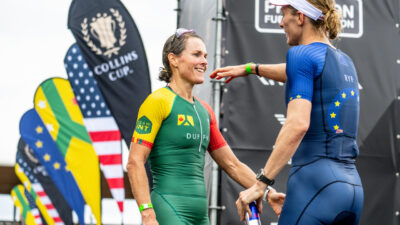 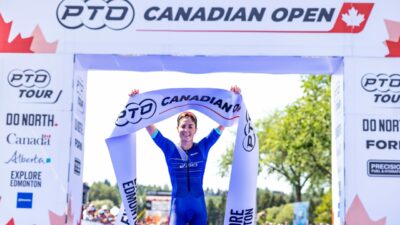 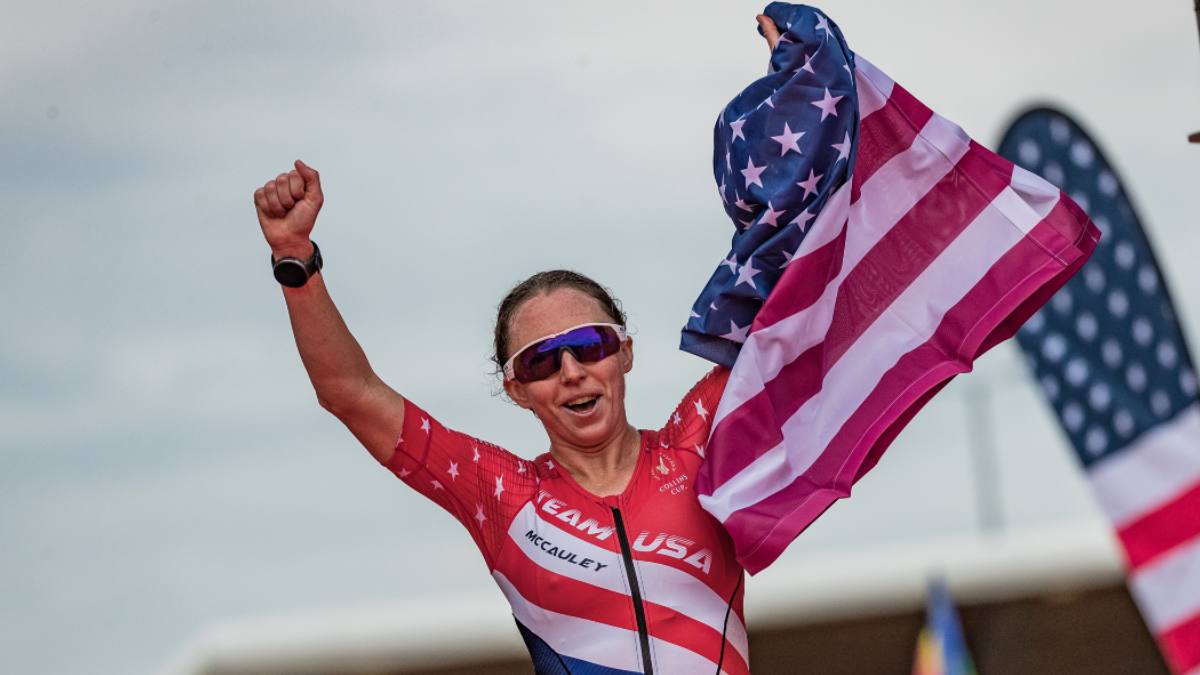 Taylor Knibb: Biggest rival is in the mirror, L.A. 2028 already a focus 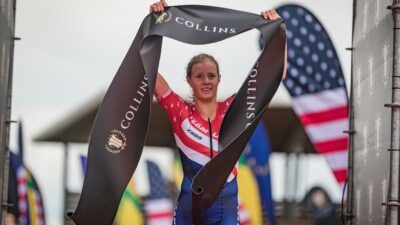 No time to dwell on 2021, it's all about the future for Taylor Knibb 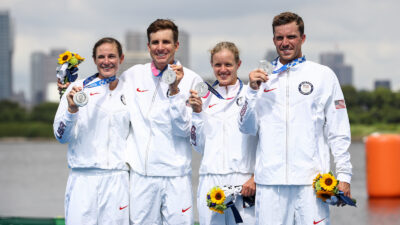 'I try to have fun!' - Rising star Taylor Knibb on her red-hot summer 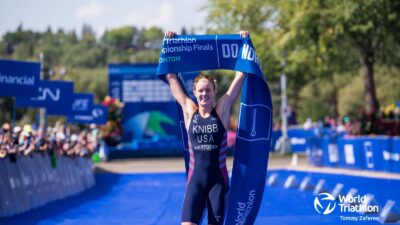 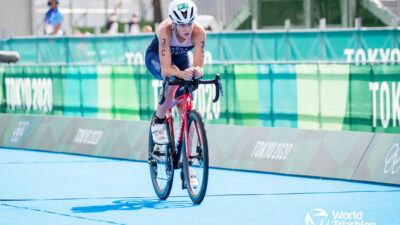 Quite the homecoming as Taylor Knibb takes second in Boulder 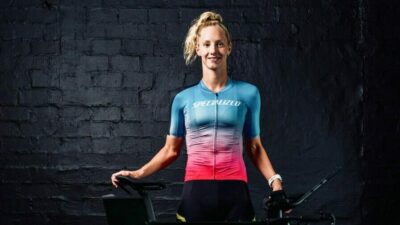 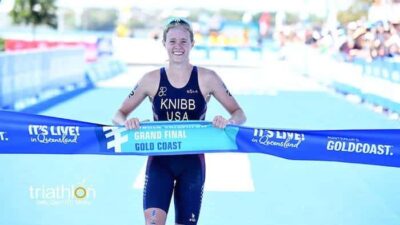 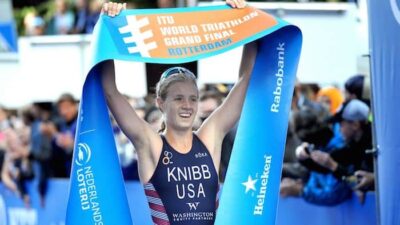