2017 has been, on balance, a very good events year for British Triathlon from the perspective of this Editor.

Rewind 12 months, and memories of the ‘one and done‘ Windsor Duathlon and – in particular – a very painful debut (for Age-Group athletes), at the ITU World Triathlon Series Leeds 2016 left the sport’s governing body in the UK with plenty of public apologies to make and an awful lot of rebuilding to do. Having been at and worked on all of the events I’m going to mention here – and spoken at length to many of those involved – 2017 was going to need the bar raised. A lot. Credit where it is due, it has been.

In fairness, the return to form started during 2016, the fourth edition of Tri Liverpool being the best yet.

For 2017, Leeds was by far the biggest hole that needed to be filled – and the decision to go ‘all in’ on that meant, alas, the end of Tri Liverpool. Starting from possibly the lowest base possible, Leeds really did deliver in 2017. It was a brilliant weekend, and if you still have the scars from 2016 that make you think ‘never again’ – understandable – I would genuinely encourage you to reconsider. Lots of promises were made for the 2017 edition and they were backed up. 2018 should be better still.

The latest and newest ‘major’ event was on Saturday, the Accenture British Triathlon Mixed Relay Cup Nottingham. Based on the now Olympic Games discipline, the event saw the vast majority of the (not ill or injured…), best of British, along with international representation from Canada, Australia, Japan and Germany. With live BBC1 TV coverage on a Saturday afternoon, it had to work.

What you don’t see – if you are not there in the days before the event – is exactly what goes on behind the scenes. I would estimate – very conservatively – that there were at least 100 people working at the venue on Friday, in capacities that you typically never really notice as an athlete. If someone told me it was likely double or triple that, I would struggle to doubt them.

Putting on an event of this scale is HUGE. Partnering with OSB Events for the delivery of this race was a masterstroke – just as retaining Taylor Made Event Management was for the Leeds event – and, no doubt, went a long way towards what was certainly an impressive debut.

A true city centre course – and with a grandstand backdrop which will rival anywhere – this was a major investment.

The recently announced partnership with Accenture puts particular focus on the expansion of this format for 2018 to multiple venues. It was an impressive debut. I hope now that the concept is both sustainable and can be expanded. It was an impressive start, congratulations to everyone involved.

Leeds I won the first ever Accenture British Triathlon Mixed Relay Cup in Nottingham in front of a packed crowd on the Victoria Embankment. The all-star team of Georgia Taylor-Brown, Aaron Royle, Jessica Learmonth and Tom Bishop lifted the Cup ahead of Loughborough I, followed by Canada as seventeen teams raced in perfect conditions.

Mixed Relay is set to feature for the first time at the Tokyo 2020 Olympic Games, and five Olympians were part of the action in Nottingham. An initial 300m swim in the River Trent was followed by a 7.5km bike ride and 1.5km run before athletes handed over to their next team mate to do the same again. In total, seventeen teams of four athletes took part, including international teams from Japan, Germany, Australia and Canada. 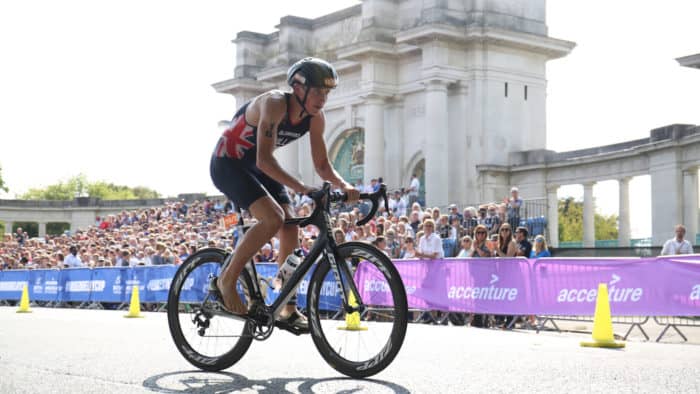 Japan made the strongest start through Fuka Sega’s leading swim, but the race soon turned into a battle between two Leeds teams, Loughborough and Canada. Coming into the final leg, Jessica Learmonth of Leeds I was running shoulder to shoulder with Canada’s Paula Findlay and handed over to Tom Bishop just centimeters in the lead.

Bishop’s bike leg made a certainty of his team’s victory, and Ben Dijkstra put in a huge swim leg to move Loughborough I into contention. Bishop had time to celebrate with the finishing line crowd before Dijkstra finished in second place followed by Canada.

Bishop said: “We put the pressure on ourselves just because we wanted to take the win. When I realised the gap was opening up on the bike I just thought ‘keep on pushing,’ and at the end we came home with the win. The whole team carried us really well.”

Chris Perham, Loughborough’s second leg athlete added: “The atmosphere throughout the whole competition has been outstanding, and I hope to come back and do it again.”

Jeremy Briand, who did the final leg for Canada, said: “It was fun being back in the UK as we were here for nationals earlier this year. It’s a fun type of racing and we’re all still young.”

British Triathlon CEO, Jack Buckner, said: “There are always nerves when there’s a brand-new event, with a new format, in a new location; but everything went well. It was a great atmosphere and early estimates are that the event attracted up 20,000 spectators and had a fantastic response via the live BBC TV coverage. The energy from the crowd was electric.”

“It’s been a fantastic day at the Accenture British Triathlon Mixed Relay Cup. We’re so proud to support British Triathlon as they develop new and innovative events in which to showcase the sport, and Nottingham was the perfect host city in bringing triathlon fans together.”

Emma McGuigan, Group Technology Officer for Accenture’s Communications, Media & Technology operating group, said: “It’s been a fantastic day at the Accenture British Triathlon Mixed Relay Cup. We’re so proud to support British Triathlon as they develop new and innovative events in which to showcase the sport, and Nottingham was the perfect host city in bringing triathlon fans together.” 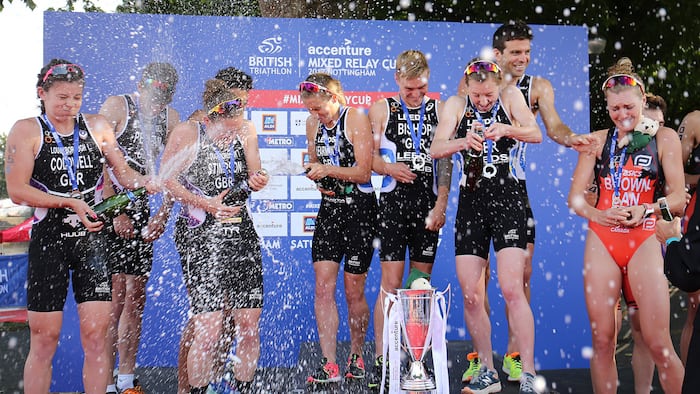