Second for Alistair Brownlee after early bike mechanical while leading

It all started so well for Alistair Brownlee today at IRONMAN 70.3 Marbella in Spain. It actually finished pretty well too, to be fair. If it hadn’t been for that pesky bike issue…

First out of the water in a swift 22:31, Brownlee was on his own, 39 seconds clear and with a hilly bike course ahead, surely a game of ‘catch me if you can’ (but you probably can’t…), was about to begin? Not so. Half an hour later, he was outside of the top-10 and more than six and a half minutes down having suffered a technical issue – exactly what we are not sure at the current time – with his bike.

While Brownlee was having his problems, Germany’s Andreas Dreitz was showing his own class on two wheels, moving from fourth out of the water to a solo lead which, by halfway, put him almost four minutes clear of Domenico Passuello (ITA). Brownlee was back in the race, but still only in eighth position and more than eight and half minutes back.

The Dreitz charge continued until T2 where he clocked a 2:11:48 bike split over the challenging Marbella terrain, building himself a surely race winning lead of 6:30 over Passuello, with Kevin Rundstadler (FRA) next 10 minutes back, just ahead of the chasing group of Brownlee, Kevin Vandendriessche (BEL), Johann Ackermann (GER) and Adrian Haller (SUI).

Brownlee was soon into third place early in the run, but still almost 10 minutes down on Dreitz and 3:30 down on Passuello with 20km to go. Pre-race, I’d suggested that Alistair preference would have been a hard swim-bike followed by, in relative terms, an ‘easy’ run given his longer-term focus on maintaining and building fitness through the season, as he told me recently. If he still had any designs on recovering from that dreadful start on the bike to win, that approach wasn’t going to be possible. Even a great run was surely not going to threaten the lead of Dreitz anyway.

Alistair made up time on Dreitz and Passuello at every split, eventually passing the Italian to move into second place around the 12km mark, before continuing to close on the German. While the gap was closing consistently – and the double Olympic Champion would finish with a race best 1:11:03 half marathon, it was never going to be enough. Dreitz added a 1:17:01 run to his speedy bike leg and take the win by just over four minutes.

A frustrating day perhaps for the Brit, but at the very least, his qualification for the IRONMAN 70.3 World Championships in Nice – his key target for the year – is now assured.

Pre-race, Germany’s Laura Philipp was the overwhelming favourite to repeat her victory of 12 months ago. She did just that – by more than 10 minutes.

Malgorzata Otworowska (POL) lead the way on the swim, her 24:32 more than two minutes clear of the chase group headed by Philipp.

Women’s leader Malgorzata Otworowska is out the water in 24:32 – gap to Laura Philipp and the chase group is 2:17 #IM703Marbella pic.twitter.com/MdUTf1Oq3D

The defending champion was almost two and half minutes clear by midway, with Otworowska still moving well in second place. Fast forward another hour and Philipp reached T2 5:15 clear of Nina Derron (SUI), with Otworowska now third at +7:09.

That trio remained in place until 16km into the run, where Marta Bernardi (ITA) was able to take over third position, remaining there until the finished. Laura Philipp added a best run split (1:21:01) to her fastest bike ride of 2:36:32.

Laura Philipp takes #IM703Marbella again – she is your back-to-back champion in 4:28:56 pic.twitter.com/BjKkVCmdaQ 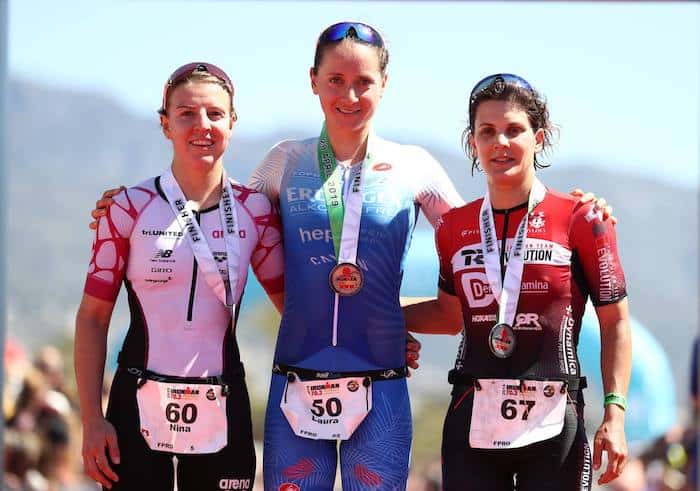