There may have been no British Elite athletes racing in New Zealand yesterday at the New Plymouth ITU Triathlon World Cup – but there is a British connection to the Italian winner, via a Canadian coach… sort of!

Third two weeks ago in Mooloolaba, Angelia Olmo (ITA) stepped up two places to top the podium in New Plymouth, her first ITU World Cup victory. Part of the leading group throughout the race, she was one of a group of six athletes who from the very early stages of the 5km run were going to determine the medals. Switzerland’s Jolanda Annen forced the pace throughout and the chasers were gradually whittled down, but she couldn’t drop the Italian who pulled clear in the final kilometre to take the win over the Swiss athlete.

Olmo is now part of the training group of Joel Filliol, the former British Triathlon Head Coach, who guides a who’s who of stars including Mario Mola (ESP), Katie Zaferes (USA), Vincent Luis (FRA) and recently the addition of Great Britain’s 2013 World Champion, Non Stanford. Filliol is also now the National Coach for Italy, and his knowledge and guidance seems to working for the Italian squad who are quietly gaining some increasingly impressive and consistent results, including finishing ahead of the Great Britain team at the recent ITU Triathlon Mixed Relay World Series in Abu Dhabi.

Olmo puts significant credit for her success in the post-race video (see below), to training alongside athletes in the Filliol squad for her improvement and building her confidence. 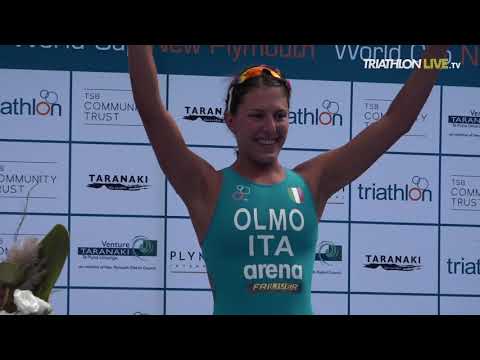 Here is the full race recap courtesy of the ITU Media team.

In the women’s race it was no surprise that Australia’s Emma Jeffcoat, remaining true to her top ranking leading into the race, navigated the choppy surf-like conditions and led the field of women through the swim and out onto the sand, for the run up to transition. 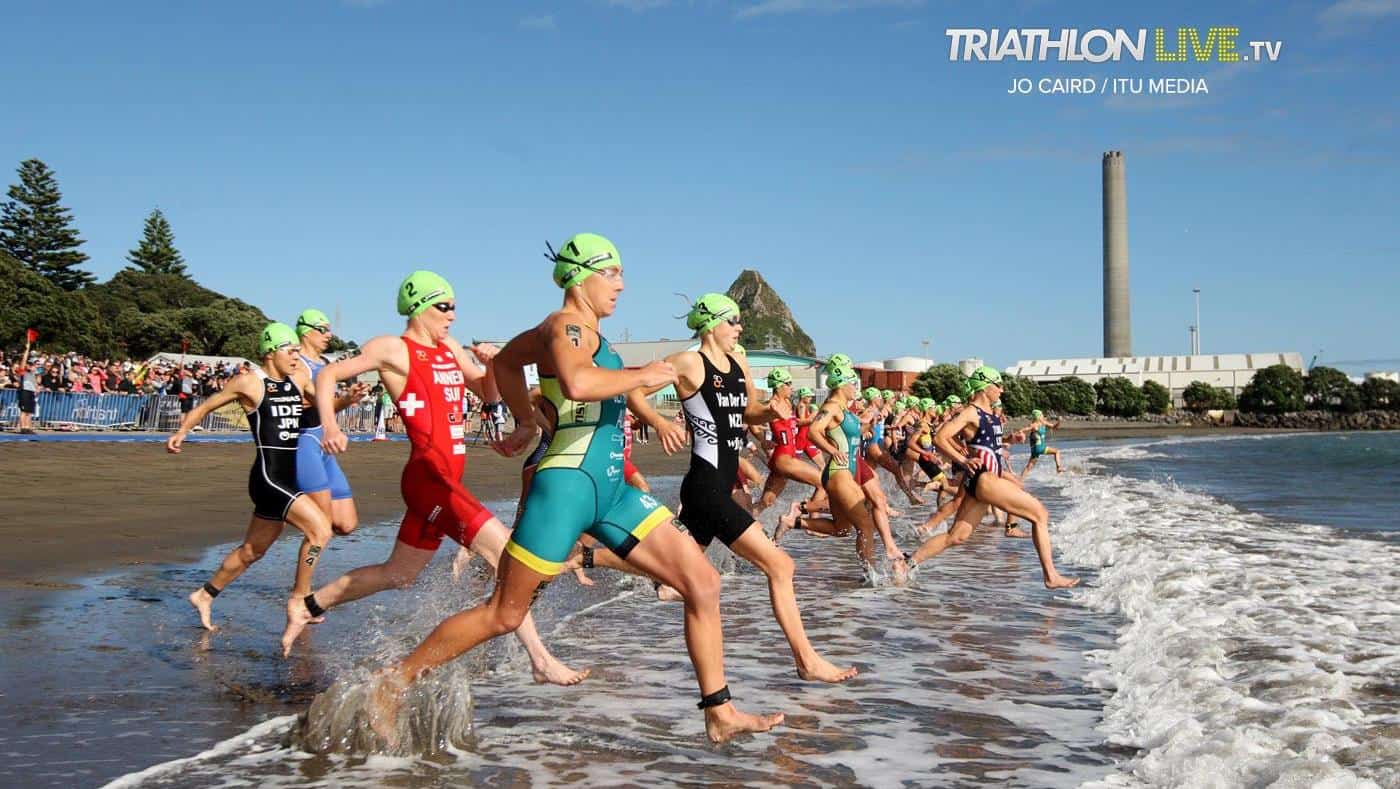 New Zealand’s Sophie Corbridge was working hard to lead the way for the chase group, 8-seconds behind the leading women. Spain’s Carolina Routier was embedded in this chase bunch. Estonia’s Kaidi Kivioja, from the ASICS World Triathlon Team, was sitting in front seat of the third group, a further 26-seconds down on the race leaders.

The course in New Plymouth kept athletes honest as they took the turn to climb the hill, looped and made their way back down into the event precinct each lap, testing them physically and technically.

Annen of Switzerland led the group of ten women into the corner and back into transition for the final lap of the bike course. Italy’s Angelica Olmo, Jeffcoat and Van Der Kaay pushed the pace and took turns out in front.

The same group of experienced cyclists stayed together as they took the final hairpin turn of the day and into their second transition, led by Hedgeland who was wearing the green and gold suit for Australia.

Hedgeland, Jeffcoat and Annen produced the quickest transitions and hit pavement for the final stage of the race, with the chase group entered transition with a 37-second gap on the front runners. Also in the lead group were some strong runners including Olmo, Van Der Kaay and the experience of Barbara Riveros from Chile and Tamara Gorman from the US triathlon team.

The battle was on and it was obvious that the podium spots would be awarded within this group of leading women.

Jeffcoat lost grip of the lead group in the last stage of the run and Van Der Kaay also pulled back the pace but held onto fifth position. The leaders made the final turn of the course and it was Olmo, Annen, Hedgeland and Gorman who were in charge together. With only three medals to award, the race for podium contention was not yet established.

Olmo finally made the bold move and extended a gap to lead by a few seconds. It was just enough to see the Italian storm onto the blue carpet to claim the gold medal, celebrating her first world cup victory and a career highlight on the coast of New Zealand. 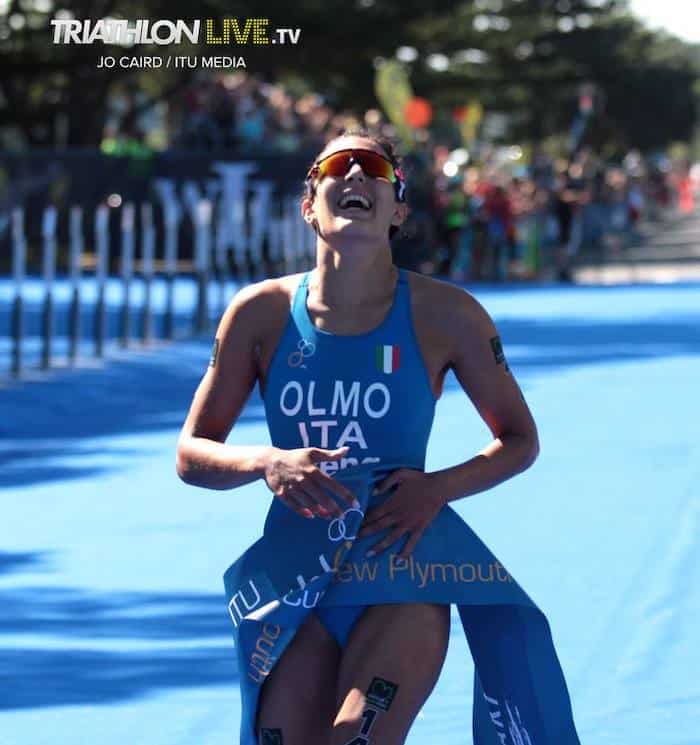 Annen showcased exceptional form across all three disciplines today to be awarded the silver medal. Australia’s Hedgeland had the race of her career to cap the women’s podium with the bronze medal.

Gorman chased down fourth place and was thrilled with her performance and Jeffcoat crossed the line in fifth position. 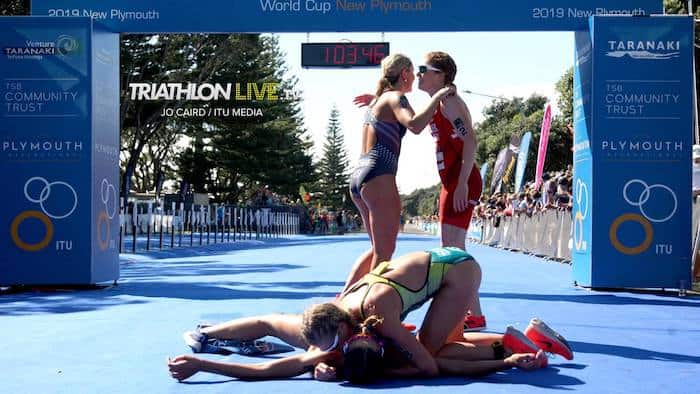 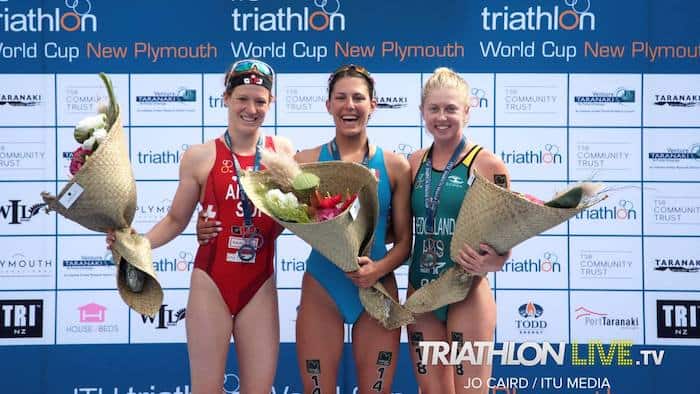