After a year out of the podium in the WTS circuit, Non Stanford returned back to the World Triathlon Series glory to claim the victory in the 2019 Hamburg Wasser World Triathlon Hamburg, after a gutsy race in which she never looked back. Last year’s champion, Cassandre Beaugrand (FRA) claimed the silver while USA’s Summer Rappaport out-sprinted Rachel Klamer (NED) to claim the third spot on the podium.

The afternoon started in Hamburg with a full field, 55 women lining up under light rain on the pontoon at the Alster, with Cassandre Beaugrand taking the lead almost immediately, followed up close by another three excellent swimmers, Summer Rappaport (USA), Sophie Coldwell (GBR) and Katie Zaferes (USA).

After the 750m swim, the four of them were closely followed by a large pack of athletes that included strong bikers, like Taylor Spivey (USA), Emma Jeffcoat (AUS), Laura Lindemann (GER) and Vicky Holland (GBR) – who had to serve a ten seconds penalty in the first transition due to an early start.

A large group assembled in the first of the six laps on the slippery streets of the Hamburg city centre with all the top riders in there, commanded in turns by Spivey and Nicola Spirig (SUI), but only a couple of kilometres into the bike course the current Series leader, Katie Zaferes (USA), was involved in a crash and was left riding solo almost 80 seconds behind the leaders.

With 18 riders in the lead, the group took it a bit easier trying to avoid congestion in the slippery turns, and still managed to get almost a minute over the chasers, with Emilie Morier (FRA) and Claire Michel (BEL) leading the second group, and Taylor Knibb (USA) riding by herself among the two groups for almost the whole 20km bike course. Behind them, Zaferes managed to catch up with a small group and kept the time difference to just over a minute, which still gave her chances of finishing in the top ten, but the American looked exhausted when she got off the bike.

When it all came to the run, Non Stanford decided to be brave and early and was the first one out of the second transition. Without looking back even once, the Briton increased her speed to leave behind Cassandre Beaugrand and Laura Lindemann, the only athletes able to follow her in the early stages. With the group stretching behind her, Non kept the lead during the whole run, with battles going on behind her for the remaining podium positions.

Nicoloa Spirig was the first one to give up in the podium places, followed by Lindemann, Spivey and Georgia Taylor-Brown (GBR). In the last metres Stanford sprinted to the finish line to stop the clock on 59:24, with Beaugrand behind her to grab her first WTS podium of the season. In a furious sprint for the remaining spot on the podium, Rappaport was able to beat Klamer by just a couple of metres. 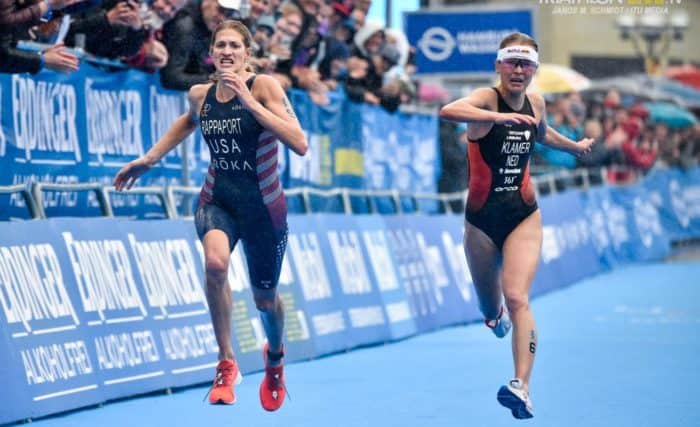 “I really didn’t expect to do that”, said a visibly emotional Stanford after crossing the finish line. “I’ve been trying to edge my way back to the podium and this is testament to all the hard work behind the scenes. There was a crash behind me at one point and my wheel was slipping and my saddle dropped down too. I’m going to fully focus on preparing for Tokyo now and I want to go there and show the selectors I’m a genuine contender for that team”, she explained. 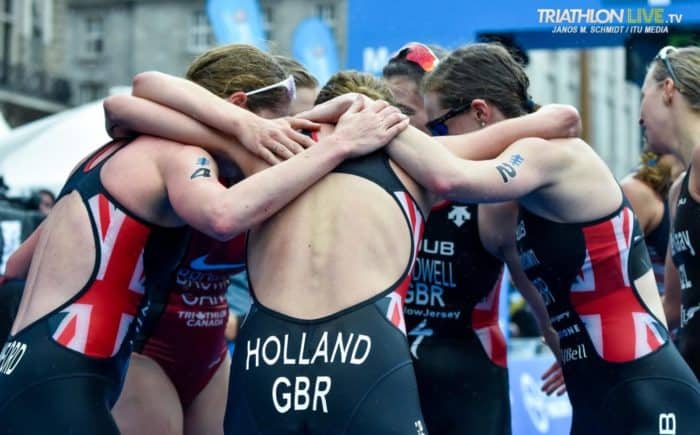 Also emotional was the silver medallist, Beaugrand. “I love this race and it’s a great surprise to be on the podium. It was tough in that weather but I had my best swim and wanted to keep with the pack. Non is very strong and I’m very happy for her with that comeback and I’m happy with my race too”, she said.

Rappaport was completely thrilled with her second podium of the season, after her second place in WTS Yokohama in May. “The conditions were really crazy, my wheel was slipping every time I got out of the saddle but I just wanted to keep focus. I think that’s the first sprint finish I’ve ever won in my life but I just thought ‘we need an American on the podium today’ as we have every race this year and my feet were slipping but somehow I just got it done”, she said. 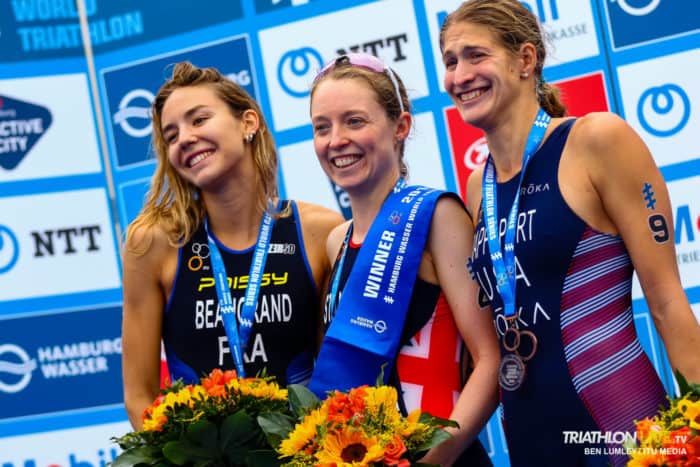