Howard and Ewing are the new Scottish Standard Distance Champions

Knockburn Sports Loch was the host for the final event of the year on Sunday, and here’s the news of how it all played out.

On Sunday 1st September Triathlon Scotland were at Knockburn Sports Loch for our final championship of the year, the 2019 Scottish National Standard Distance Championships organised by Fleet Feet Triathletes.

The race conditions like a lot of our championships this year were warm and with a wetsuit optional swim, it was great swimming conditions for the athletes with flat, calm waters and no current. The event, which had a sprint and super sprint races before the main standard race, had over 200 people competing.

At 10:30am, with a deep water start, the 2019 Scottish Standard Distance Championship athletes began their 1500m swim. With none of the last years overall medallists on the start line, it was wide open for a new champion to be crowned in the Male category. Luke Howard (Stirling University Triathlon Club) was first to put his stamp on the race, getting himself out to an early lead 35 seconds ahead of the rest after the first lap of the swim course. Coming out of the water and into the first transition Luke had a lead of 80 seconds to second placed Adam Chmielowski (Edinburgh RC) and Kevin Watson (Total Endurance) in third.

Heading out onto the roads, Luke saw his lead reduced throughout the bike by Robert Harrison (Monifieth Triathlon Club). Robert had the best split on the bike which allowed him to move from 6th to 2nd coming into the final transition and only a couple of seconds behind Luke. Kevin had a very a smooth dismount into T2 helping him into 3rd place going onto the run.

“I knew I was going to have some strong bikers coming from behind me, so my aim was to just get out of the swim as far ahead as I possibly could to hold them off. I just about did it, I had one right up my back as I came into T2. I knew with a strong run I could hold off and take the win.”

“Relief. The long stretch [on the back of the run route], the second time up there was brutal. I was glad I had a gap”.

In the women’s race all three of last year’s medallists were on the start line and they were hot favourites again to be competing for the title. Reigning champion Kirsty O’Brien (Lanark Triathlon Club) sent out a message early in the race when appearing first out of the swim (4th in the whole field). 10 seconds back Eilidh Thomson (Edinburgh University Triathlon Club) was next out of the water and last week’s Scottish Cross Triathlon bronze medallist Caroline Arthur (Fleet Feet Triathletes), was the third female out of the water.

Eilidh had the quickest T1 and was the first female onto the bike. Once onto the 40km bike course it was Anne Ewing (META Tri Division) who took control of the race, putting in the fifth overall fastest bike split (1:11:40) allowing her to move up the field from ninth into top spot. A couple minutes back Kirsty was second out onto the run closely followed by Jen Stewart (G Squad Triathlon), who had moved into a podium position.

On the run Anne managed to keep the gap to the chasers to 90 seconds after the first lap, while Jen had overtaken Kirsty and was comfortable in second place. Anne finished the race in first place to claim her first Scottish Championship (2:21:59), Jen came home in second (2:24:08) and third was Kirsty (2:27:36) 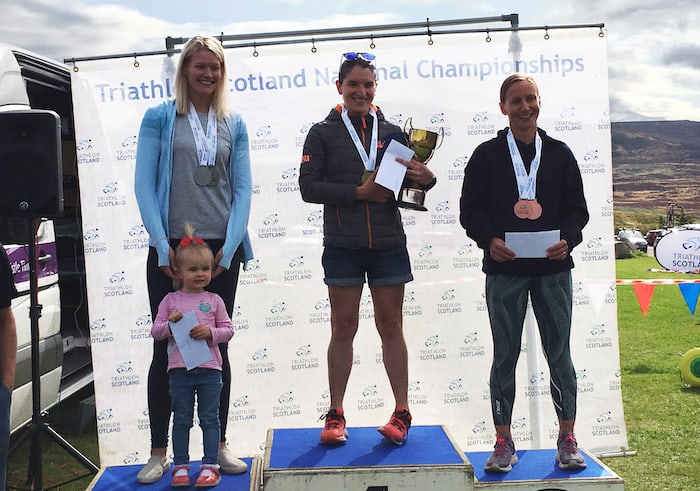 After the race Anne talked about her first long run since May:

“It was hard, I have only been back running for about a week, so I have done two 5km runs in the last week and just needed to risk it. It felt horrible but I survived, I was surprised at how well it went. It was really good [to cross the line], I was just happy to get the run done!”

On what she is up to next Anne said,

“Back to work and then I will see what happens. I might do Gullane next weekend. But after that, hopefully go out to Cape Town and do the Challenge event in November.”

A full list of times can be found HERE

Triathlon Scotland would like to thank Fleet Feet Triathletes for organising the race, all the volunteers and officials and the athletes for their efforts in getting to and competing in the event.