And the winner is… Flora Duffy. We think…

Well that was quite a finish, in more ways than one. Is it all over? I’m not 100% sure, but at around 2:30 a.m. UK-time when I press publish on this article, this is the situation at the time.

Who would have predicted that ITU Competition rule 2.11 f.) would prove to be central to the results of the Elite Women’s race at Thursday’s ITU World Triathlon Olympic Qualification Event?

After a fine race at Odaiba Marin Park, Great Britain’s duo of Jessica Learmonth and Georgia Taylor-Brown ran clear of twice World Champion Flora Duffy (BER) on her return to top level racing on the shortened (more on that below) 5km run. Having been part of a breakaway group which was eventually just six athletes, they proved to be the strongest runners from that group and were in no danger from the chase pack who at T2 were not far short of two minutes behind. As it turned out, the only danger was themselves.

As they hit the blue carpet and with the finish line ahead, the expected sprint for the win never happened, and the pair crossed the line together, hand-in-hand and more than content with their day. Learmonth was (initially) given the verdict from the photo finish, as acknowledged by the (since deleted…) tweet from TriathlonLIVE: 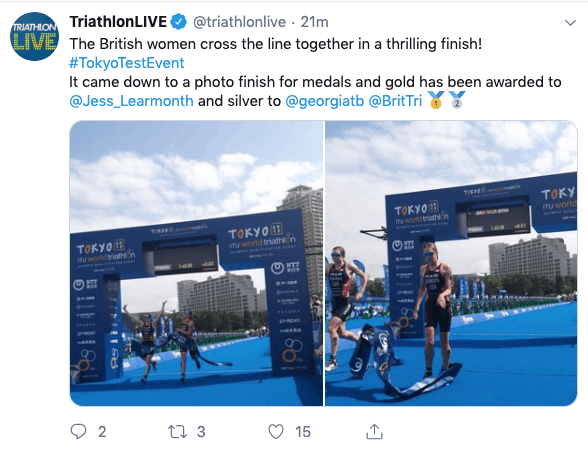 And that, is where the problems started – and it’s all because of this rule, specifically the “finish in a contrived tie situation” line. 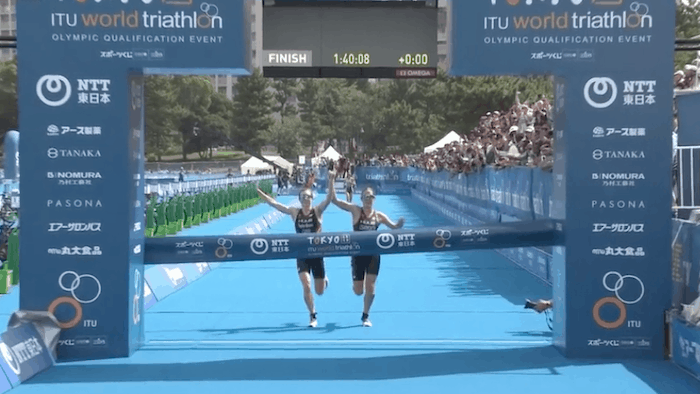 This rule is not new – as far back as London 2012 I remember public discussions about warnings given to the Brownlee brothers that, should the situation present itself, they should not attempt to cross the line together in Hyde Park or they would risk disqualification. I’m not aware that the rule has ever been applied at a top tier level of racing, until today.

Let’s rewind, before the race even started…

The first big story of the race arrived two hours before race start, with news that the ‘Heat Stress Indicator’ – as measured by Wet Bulb Globe Temperatures (WBGT) was at a level which lead officials to cut the scheduled run from 10km to 5km. This was the full announcement:

Regarding the air temperatures and the Heat Stress Indicator (WBGT):
At 7.30 am, when competition starts, it will be high-risk conditions (29)
At 9am, before the start of the run segment, the Heat Stress Indicator moves to Very High Risk level (31) and by the end of the run segment we will be on Extreme Level (32).
As such, it was decided to shorten the run distance to 5km, according to ITU rules.

There was full consensus on all parties for the decision of the ITU Medical Delegate and ITU Technical Delegates to shorten the run distance to 5km, considering the athletes’ health.

Let’s get to the race itself….

In her normal style, Great Britain’s Jessica Learmonth went ‘full gas’ in the swim, and today the entire field were struggling to stay with her. A two-lap course, from a British perspective, Georgia Taylor-Brown was just seven seconds back on her fellow Leeds Triathlon Centre athlete after 750m, with Vicky Holland and Non Stanford 16 seconds in arrears. Surprisingly perhaps, given her usual swim speed, Sophie Coldwell was already 27 seconds down.

Learmonth continued with her pace on the second lap of the swim and was a full 10 seconds clear of Summer Rappaport (USA) at the swim exit. Katie Zaferes (USA), Georgia Taylor-Brown and Flora Duffy (BER) were all the close order, while the remaining Brits were Vicky Holland (15th, +32 seconds), Non Stanford (21st, +38 seconds) and Sophie Coldwell +48 seconds down on the pace-setting Learmonth.

Jess had swum brilliantly… but was it too good? In an ideal world, past history has shown that a small breakaway with the likes of Zaferes and Duffy has proven successful, but starting the bike she was now isolated, but she simply put her head down and kept up the effort. With the returning Flora Duffy leading the efforts of a chase group of around 11, she wouldn’t be on her own for long, and with two of the eight bike laps complete, the gap was just three seconds.

What a statement this is by @floraduffy as she now takes to the front of 12 after two laps of the #Tokyo2020 #TestEvent pic.twitter.com/XcbYAh1gHY

Big news on lap three saw a crash impact none other than WTS Rankings leader Katie Zaferes and her USA team mate, Kirsten Kasper, Zaferes out of the race shortly after – and hopefully not injured, with the Grand Final and surely a World Championship title to collect in a few weeks time.

Combined with an additional two athletes falling off the pace set by Flora Duffy (Summer Rappaport / Simone Ackermann), the leading group was now down to eight athletes – Duffy, Taylor-Brown, Learmonth, Lopes (BRA), Kingma (NED), Spivey (USA), Jackson (AUS) and Betto (ITA). The chase group, containing Holland, Stanford and Coldwell, was one minute down at the midpoint of the ride.

The pace continued at the front with Maya Kingma and Emma Jackson the next to be despatched, the leading group reduced to six, while also extending their lead over the chasers. With just a 5km run today, were the podium contenders already decided? Those six athletes reach T2 1:47 clear of the chasers – no chance of medals.

The elite women are on the run. There's a lot of quick runners in the lead group with @Jess_Learmonth @georgiatb @floraduffy opening up a 30m gap on the field.
Let's see what pace these women can push across the 5km course.#TokyoTestEvent #Tokyo2020
📺 https://t.co/cmV48JJKk1 pic.twitter.com/UqOju06ZcH

Meanwhile, at the front of the race six soon became three, with the British duo of Taylor-Brown and Learmonth escaping with Flora Duffy. A kilometre later, Duffy was being distanced and a British one-two in Tokyo was looking a realistic prospect.

The winner in Leeds, Taylor-Brown has the more distinguished running pedigree and was surely the favourite and was looking in control at the front. Side-by-side with 2.5km remaining, Duffy was eight seconds back with just one lap of the reduced 5km run course to complete.

The Brits looked in control, ensured they took on plenty of fluids and as they approached the blue carpet were still locked together. Who would take the sprint… well, there would be no sprint, as the training partners entered the finishing straight side-by-side and then crossed the line together. The photo-finish gave the official victory to Learmonth, both given the same time.

“I’ve never been as prepared for a race in my life as this.” said Jessica Learmonth after the race.

“I had a really good swim, I committed from the start and on the bike we were dropping people. On the run we knew we were going to get first and second, so we didn’t need to do anything silly. We are team mates, room mates and so to finish together was fantastic” said Georgia.

While an appeal was in place at the time of writing (before I, belatedly, go to bed…), the published results appear to confirm the DQ outlined above. That could potentially change, with the podium presentations for the race delayed until after the men’s race on Friday.

Lots of potential implications (above and beyond the loss of not insignificant prize money), given that several nations, including Great Britain, were using the event as part of Olympic selection. Moving everybody ‘up’ two positions by DQ’s to the British duo, could have a dramatic impact on athletes from other nations. We’ll see how that all plays out in due course.