Here, as promised, is the second of two ‘comeback’ reports from last weekend’s London Triathlon (www.livetotri.co.uk/london). Last week we heard from Tim Heming (HERE), who was back after an eight year absence to see how things had changed for the ExCeL-based event while he was away.

In this second feature, Kate Allan was making a return to the sport (if not a return to her old training!), three years after her last triathlon.

A few years back (as Kate McNeill at the time), Kate was an accomplished middle distance triathlete, winning Bronze (2014) and Silver (2015) in her Age-Group at the ETU Middle Distance Triathlon European Championships. Finding her niche in cycle time trialling and joining the Drag2Zero team, Kate went on to win several National Championship medals, break 20 minutes for 10-miles… and have two children!

Training is a lot further down her priority list these days, and “with no swim/run training under my belt”, it’s probably no surprise that she selected the Olympic Plus event with the long bike section to at least feel at home for part of the day.

London Triathlon Olympic Plus – A review

The London Triathlon Olympic Plus distance event is the ideal choice for strong tri-bikers. With a 80km cycling route being double that of your typical Olympic distance event, the swim (1.5km) and run (10km) both remain the traditional distances. Having not done a triathlon in three years, and with no swim/run training under my belt, combined with a pretty ‘chilled out’ past year on the bike, I thought it would be the perfect option to have a bit of ‘fun’, to play to my relative strengths and take on a bit of a challenge away from the predictable routine of family life. 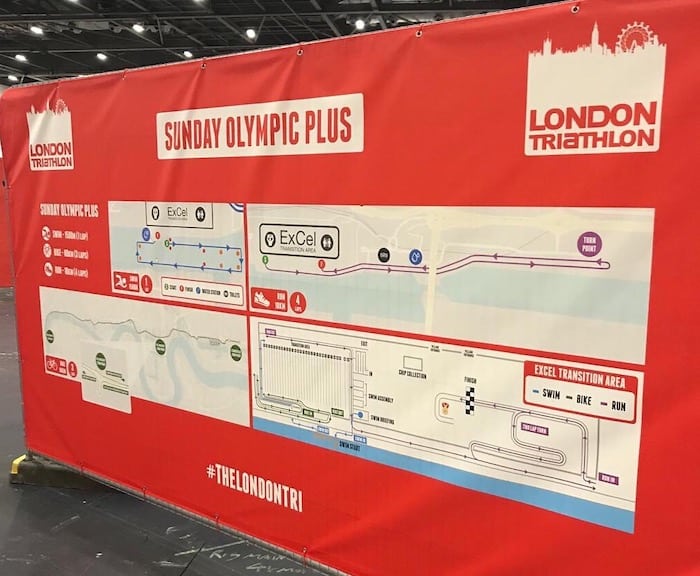 Communication from the race organisers in the lead up to the event was very good, with frequent emails providing important updates, and my race number and bike/helmet stickers arrived through the post a few weeks prior to race day, leaving one less thing to think about on race morning. We made the decision to drive down on the day, as the idea of a one-room hotel stay with two under 3s was less than appealing – for obvious reasons – and so we left the kids with my mum and travelled down in the very early hours, arriving in good time to an abundance of parking options and a very smooth entrance into the venue.

Chip collection and bike racking was easy, and every single volunteer/member of staff greeted us with a smile. The race briefing was very clear and thorough, welcoming for newbies but at the same time not patronising for the more experienced triathlete.

A simple out-and-back route, this was the only part of the event that made me truly nervous, having only swam four times since having my second baby 13 months ago. Despite being remarkably warm in the water, it took me a while to catch my breath, and I made the decision to position myself towards the back not wanting fall prey to a literal pounding by the faster swimmers.

The course was well marked, with plenty of canoeists offering direction, and large inflatable buoys marking out the key turns. Having not swam properly for so long my stroke felt awkward and I found myself having to take a breath on every stroke, not having the confidence or indeed strength to muster a proper rhythm. Despite being a 1.5km swim, my Garmin showed up as 1.7km, which I assume is down to rusty sighting, through which I most likely weaved here there and everywhere.

Coming out of the water there were plenty of volunteers there to help with the removal of wetsuits (although I didn’t realise this, and did my own!), and a short run up into T1 inside the ExCel was well marked, with enthusiastic support offered from those around.

Despite being on closed and predominantly flat roads, I was surprised to find that it was not as fast as I’d first anticipated, being quite technical in places with quite a few other riders on the road to be mindful of. I spent more time sat up than I’d hoped I would, but, this actually helped me in the later miles as fatigue from the swim in my shoulders meant my body was thankful for the changed position.

That being said – what a course it was! 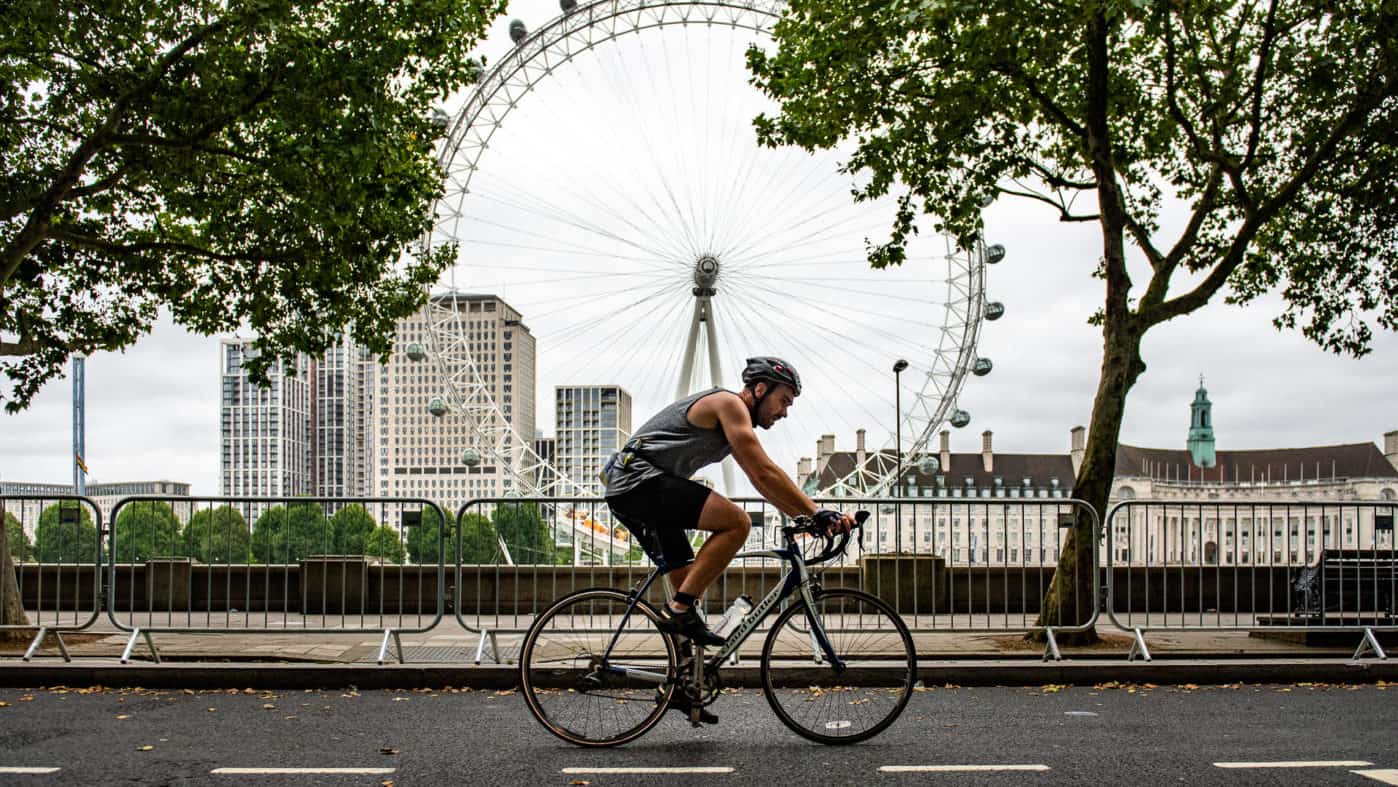 Rolling out of the Docklands and past Canary Wharf, we weaved right out to Westminster, with the London Eye sitting just across the river as a great marker for the turnaround. Marshalls patrolled well-managed pedestrian crossings, and there was an applaudable lack of littering on the course, distinct from many other events like this I have raced in the past.

The Olympic Plus course consisted of three laps in total. 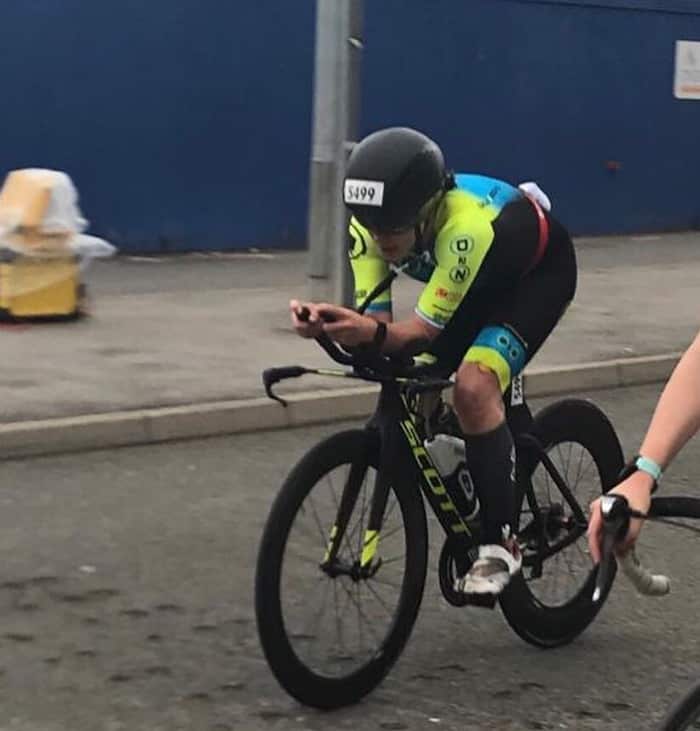 T2 was well marked again, and I was able to find my bike rack easily, the atmosphere being quite electric as it was possible to hear and indeed see other participants finishing their race at the finishing chute nearby.

The bit that hurts the most in any triathlon – regardless of how well trained you are. I’ve not run for the past three months, having been suffering with quite a bit of lower back pain, which has been plaguing me since the arrival of baby number two last June. But following an effective amount of treatment and rehab through my physio Alex Drummond (www.drummondclinic.co.uk), I’ve managed to get myself into a much better place.

Comprising of four 2.5km laps, the run course took on an out-and-back loop out and around the ExCel. Not the most exciting route granted, but the feed stations were plentiful, well stocked and signage clear. 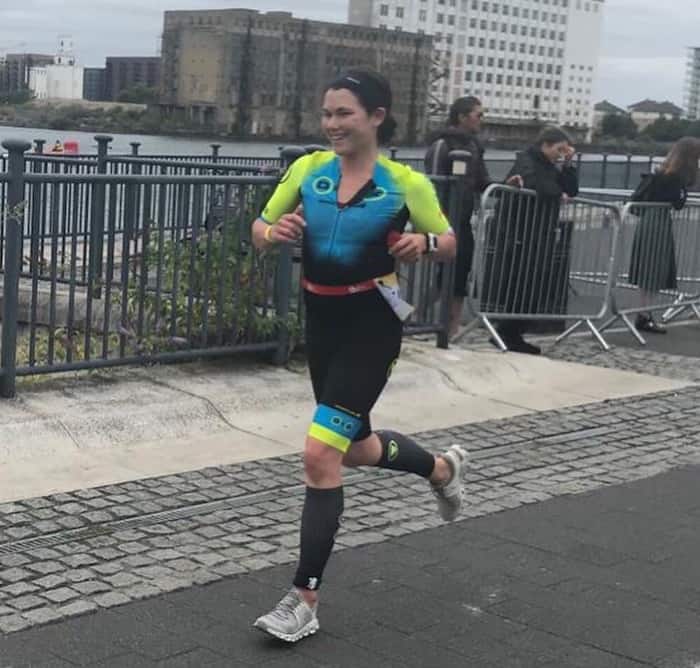 I felt much better than I’d anticipated I would – never having been much of a runner even in full fitness. Four short laps worked well for me psychologically as I’m sure it did others – it was motivating to count them off, and meant it was also great for spectators, able to see and cheer on their loved ones. The finish line was lively and exciting, and although I felt a little worse for wear, I thoroughly enjoyed it.

As welcoming for beginners as it is for elites, I would highly recommend the London Triathlon. My race experience from start to finish was seamless – and it’s really quite special to be able to ride through the closed streets of London on two wheels, taking in some of the most iconic landmarks along the way.

Personally, it has reignited my love for triathlon (not so much for the accompanying DOMS!), and may even spur me on to doing more events in the not so distant future.

Congratulations to everyone that took part!

Fancy giving it a go next year? Register your interest for the 2020 event by here: https://livetotri.co.uk/londonkA/register-interest/